Brian Hayes was worried. The EA Sports Creative Director knew the game he had worked so hard on, UFC 3, was about to be released. And when he saw Demetrious Johnson's now-legendary flying suplex against Ray Borg at UFC 216, he knew immediately that it's a move that gamers would demand that they too would be able to do. With a street date so close, however, it seemed impossible. 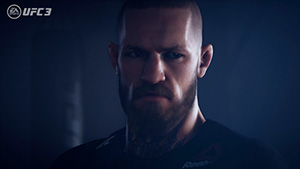 To his complete surprise and delight, he found that when he returned to the office the next day, his team of developers had already completed the mad scramble to get the signature move into the game.
That level of dedication is evident in the third edition of the UFC game. Presenting to a small group of media in Madison Square Garden, the EA team revealed a massive upgrade in the technology and user experience to a game that was already a top shelf franchise. 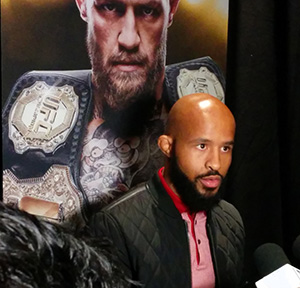 Journalists were given an opportunity to experience the new wares hands-on, and soon the room was giddy with a childlike enthusiasm for the latest update. The highest endorsement of all came from the aforementioned Demetrious Johnson, an avid gamer and developer in his own right, who played several bouts with members of the media.

“The belly button hair is perfect. The tattoo on my arm is perfect…” he said joyously, noting the detail for onscreen likeness. But what about that suplex? Was that accurate. “Oh yes!” he laughed. “They got that perfect.”

From Nate Diaz’s signature snarl, to Michael Bisping’s distinct eyes to Joanna Jedrzejczyk’s steely glare, the depictions of the fighters within the game was nothing short of a marvel. Beyond their overall accuracy, the fighters look exactly as they do today in 2017, with all the age, fashion and battle scars they’ve accumulated along the way. 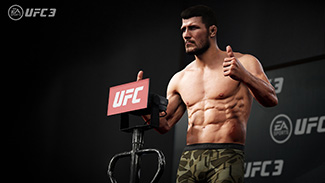 Of the many upgrades added to UFC 3, the most impressive was easily the introduction of Real Player Motion (RPM) technology, discarding the algorithm for movement from previous games, and rebuilding it from the ground up with over 5,000 new animations. The result is beautifully fluid play that allows the player to run and move while concurrently kicking or punching…just like a real fighter. For the fan who adores both the UFC and gaming, UFC 3 is truly a gem.

UFC 3 will be available worldwide on February 2, 2018 for Xbox One and PlayStation®4. Pre-order now for up to three days early access to the full game, starting January 30. Plus, get your choice of one Champion fighter in Ultimate Team, 20 Premium Packs, and much more.

Visit EA Sports to pre-order and for more info.