"Fans can expect a man to come out there and work very hard. I just
focus on what I can control and that's my workouts in the gym and that's
going out to the Octagon and performing." - Demetrious Johnson 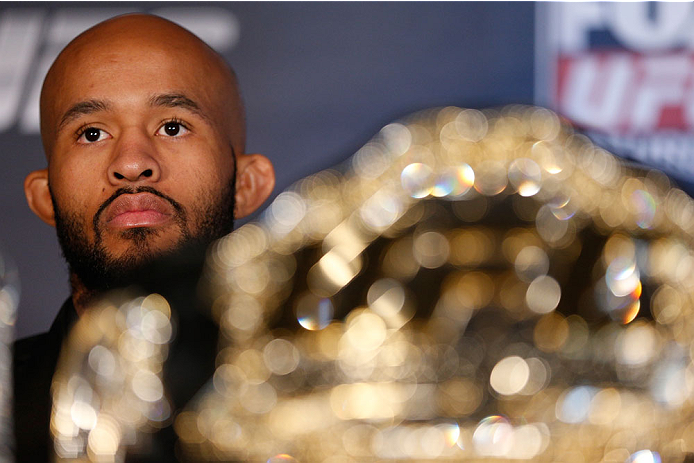 What pushed Johnson to dominate for four rounds and then submit John Moraga in the fifth in July? Hard work.

What will earn Johnson a victory for the second time over Joseph Benavidez on December 14th at UFC on FOX? Hard work.

The UFC's first / only / current flyweight champion may sound like a broken record, but "Mighty Mouse" Johnson is undefeated at 125 pounds for a reason and it has something to do with his persistence in the gym as well as in the cage.

“I just consider myself as a hard worker and a student who is learning martial arts every single day,” humbly states Johnson. “The main goal is to be the best in the world and a complete fighter and I'm just working toward that.”

At 27 years old and with a professional record of 18-2-1, “Mighty Mouse” has been to the top of two divisions - bantamweight and flyweight - inside the Octagon and seized the glittery gold belt of the latter at UFC 152, when he won a split decision over Benavidez. In the past year, Johnson has successfully defended the title twice and earned two Fight Night bonuses as well. Most recently at UFC on FOX 8 in front of his home fans in Seattle, Washington, Johnson outclassed Moraga for 20+ minutes before securing an incredibly late submission stoppage in the final round.

“I was doing what I do best, which is moving around and pressuring my opponent,” tells Johnson “My coaches were very happy. I didn't get injured. It was in my hometown and I was just happy to go out there and perform. The one thing about fighting in my hometown, it was the first time I had fought in the Pacific Northwest as a flyweight. It was a little different, but I think it worked to my benefit. I felt really strong. Just being at home doesn't mean I had to fight any harder, but having those fans were awesome. For me, if I was fighting in a backyard, I would probably have fought just as hard.”

Besides nabbing the latest stoppage in UFC history with an armbar at 3:43 in the 5th round, “Mighty Mouse” was phenomenally effective in every facet of the fight from standing to the ground. While another trademark active performance, it’s as if Johnson had no wasted movement throughout the bout, landing 71% of his significant strikes and passing Moraga’s guard 13 times on the ground. The most impressive stat and most telling of how Johnson continued to control and push the pace of this fight from beginning to end, Johnson was a perfect 12 for 12 with takedowns.

“During the fight, that was just something I saw that was open,” says Johnson. “I was in my groove. I saw that he wasn't fighting the takedowns that hard and I thought, you know, I'll just keep going that way and set something up and, eventually, I can come up with the finish. I just keep on fighting. If the submission gets there then I'm going to take it. I'm just grateful I came up with the finish.”

While there have been many new developments over the past year or so for Johnson, like getting married, becoming a father, and winning a UFC belt, one thing has not changed since he began MMA: training with Matt Hume. Since 2005, Johnson has been a featured member of Kirkland, Washington’s world renowned AMC Kickboxing & Pankration, where he’s grown to be arguably the most prestigious protégé of founder and head trainer “The Wizard” Hume. From local fights to main events on network television, Hume and Johnson are still on the same path to daily combat sports enlightenment as they ever were.

“The relationship hasn't changed at all,” explains Johnson. “He still looks at me as a student and I'm still trying to learn martial arts. Even today in sparring, he's still yelling at me (laughs), telling me what to do in sparring. The relationship has stayed the same. It's still about working hard every day and that's what he expects from me. It's just a great combination. He understands me and he's given me a great outlook on fighting. He's the yin to my yang (laughs).”

Up next for Johnson, a second showdown with the UFC flyweight strap on the line against Team Alpha Male wunderkind Benavidez in sunny Sacramento, California. Originally, this title fight was set for The Ultimate Fighter 18 Finale’s main event, but UFC on FOX’s headlining lightweight championship bout had to be scrapped, so lucky left coast Octagon fans will get an even faster paced battle for a belt. This exciting rematch takes place only 15 months after these two fought to a split decision in Toronto, which seemed like only the beginning of a great rivalry.

As mentioned, “Mighty Mouse” has been busy with back-to-back title defenses, but Benavidez has proven he deserves another shot at the top with three wins in the past year. An overall 19-3, Benavidez earned a unanimous decision against Ian McCall before scoring two devastating TKO wins both prompted by a body shot (kick, knee) followed by finishing punches. The big story all year for Team Alpha Male has been new head coach Duane Ludwig and him adding a lot of “Bang” to each fighters’ striking.

“I see a little difference,” asserts Johnson. “I think it's because of Duane Ludwig and I think it's Joseph being comfortable and getting back to the way he's fought. I think he's had some great fights in the last few fights he's fought. We're just training to beat the best Joseph.I know he's training his butt off and I'm training my butt off. I know we've both improved. It's only been a year since we fought, so it hasn't been a long time. I would say my last two fights, I fought tougher opponents who are strikers. I've gotten hurt in those fights, overcame it, came back and won. His last two fights weren't really hard fights. He pretty much had his way with them. Ian McCall was a tough fight. I'm used to pushing myself and making adjustments in my fights to overcome, and I don't really see him doing that in his fights, but Joseph Benavidez is a great fighter and we'll see what happens.”

In preparation for Benavidez for a second time, “Mighty Mouse” is putting in quality work with Hume and a litany of talented coaches and lighter weight fighters in Washington. Two of most important pieces for Johnson’s training camp are Hume’s coaching disciple Brad Kertson and undefeated flyweight Pat Runez, who was the last fighter to defeat Dodson before Johnson did in January. Other AMC fighters who are a big help are Caros Fodor, Scott McDonald, and Japanese mainstay Bibiano Fernandes. It’s a close-knit and well-maintained core who have helped Johnson grow as a fighter to reach the top of the mountain and, so far, helped him remain on top.

“We all have good fundamentals,” explains Johnson. “We all keep our hands up, we all have good footwork, we all know how to stay in our distance range, we all have good clinches. Some gyms, they all have a good guillotine or good at scrambling. With this gym, we all have a great base and that comes from the fact that everyone who trains at AMC started here. Anyone who fights out of AMC has been bred and raised there.”

On Saturday, a frenzied flyweight fracas will take center-stage as “Mighty Mouse” defends his title against Benavidez. “I'm expecting a tough fight with Joseph and I'm going to do my best,” affirms Johnson, who knows it isn’t puzzling at all what is needed for second win over Benavidez. “Fans can expect a man to come out there and work very hard. I just focus on what I can control and that's my workouts in the gym and that's going out to the Octagon and performing.”