"God Of War" Discusses His Plan And Vision For Defending His Flyweight Belt
By E. Spencer Kyte, on Twitter @SpencerKyte • Jun. 9, 2021

All in all, Deiveson Figueiredo had one of the more impressive years of any UFC fighter in recent memory in 2020.

Competing four times, the Brazilian standout posted a 3-0-1 record, winning and defending the flyweight title, while also collecting a pair of post-fight bonuses, one for his first-round submission win over Joseph Benavidez in his title-winning effort on UFC Fight Island, and one for his back-and-forth battle with Brandon Moreno that ended in a draw at UFC 256.

When the year-end hardware was being handed out throughout the MMA community, Figueiredo featured prominently, earning Fighter of the Year from numerous outlets, with his battle against Moreno earning a podium finish in the Fight of the Year race.

“I’m really happy for this recognition,” admitted the UFC flyweight titleholder, whose record now stands at an outstanding 20-1-1 overall and 9-1-1 inside the Octagon. “I’ve been fighting for years to get this recognition and to always keep the fans entertained; that’s what I fight for.

“Hopefully, I will keep putting on shows this year.”

After a hectic year that wrapped with two title defenses in three weeks, “Deus Da Guerra” asked for - and received - some much-needed time off.

“This break was something I asked for,” said Figueiredo, who ends his hiatus this weekend in a rematch with Moreno that serves as the co-main event on Saturday’s UFC 263 pay-per-view main card. “It was really hard to get to the belt and I wanted to take some time off, have some time for myself to reflect on everything and train some different things.

“Now that I’m champion and everyone is studying my game, it’s important for me to take time to focus on that, but also to take some time off and just relax.”

One of the things the champion did in his time away was open the Team Figueiredo training center, the next big step in an extended process of investing in himself that the 33-year-old from Soure has been committed to over the last several years.

Following his loss to Jussier Formiga in March 2019, Figueiredo switched up his training situation, shifting to more of a boxing-like approach with smaller camps where more of the focus and attention could be paid to the athlete getting ready to compete. With each victory, he put money back into his career, and opening a training facility is the next step in that process.

“It’s another milestone and it’s something really great,” offered the charismatic flyweight champ, who has already beaten four of the fighters stationed in the division’s Top 10, along with having battled Moreno to a draw. “To be able to have a training facility and be able to train there, to welcome other fighters like my brother and like Priscila Cachoeira in there is something good. 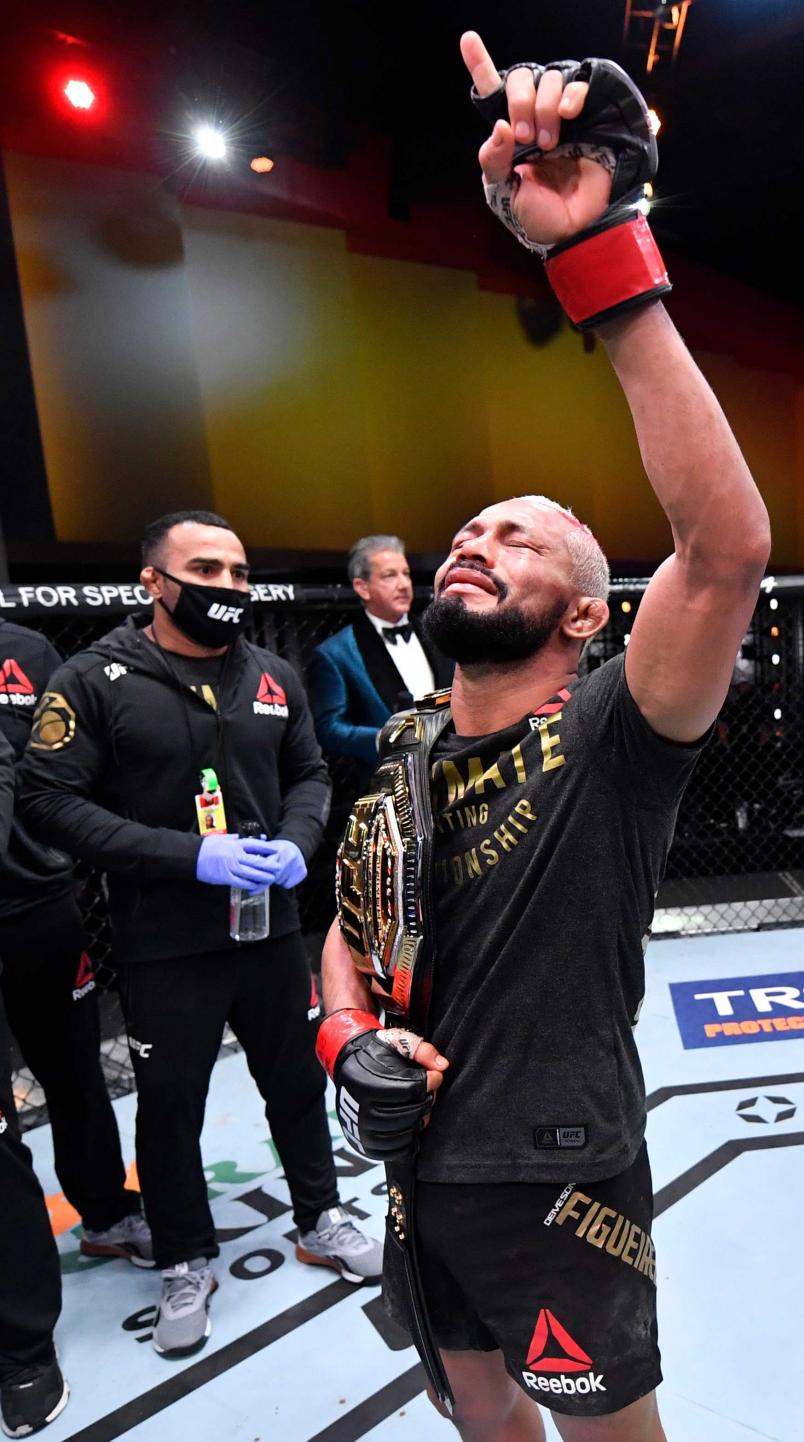 Deiveson Figueiredo reacts after his flyweight championship bout was declared a majority draw during the UFC 256 event at UFC APEX on December 12, 2020 in Las Vegas, NV (Photo by Jeff Bottari/Zuffa LLC)

“I’m really happy about it.”

What he’s most happy for though is the opportunity to step into the Octagon with Moreno again this weekend, as the title fight combatants have turned into bitter rivals.

It started last November at UFC 255, where each man earned a quick first-round finish — Moreno defeating Brandon Royval before Figueiredo submitted Alex Perez to successfully defend his title for the first time.

Following his victory, Moreno said he was ready to challenge the champion, and — to borrow from the popular Michael Jordan The Last Dance meme, Figueiredo took that personally. With each man unscathed and UFC 256 in need of another big fight, the pairing was put together for three weeks later, the duo ultimately going 25 hellacious minutes only to end up without a winner.

MORE UFC 263: Fight By Fight Preview | The One And Only Nate Diaz | Doors Open For Belal Muhammad | Fighters On The Rise | Significant Stats

One judge scored the fight 48-46 in favor of the champion, while the other two submitted 47-47 scorecards, where each fighter won two rounds and the third was scored 9-9 after Figueiredo had a point deducted for one of the heaviest inadvertent low blows in some time, his second incidental foul of the fight.

Moreno recovered and everything that transpired after the blow was as entertaining as the action that preceded it, with everyone coming away from the bout fired up about the prospects of seeing these two tenacious warriors battle it out for a second time. 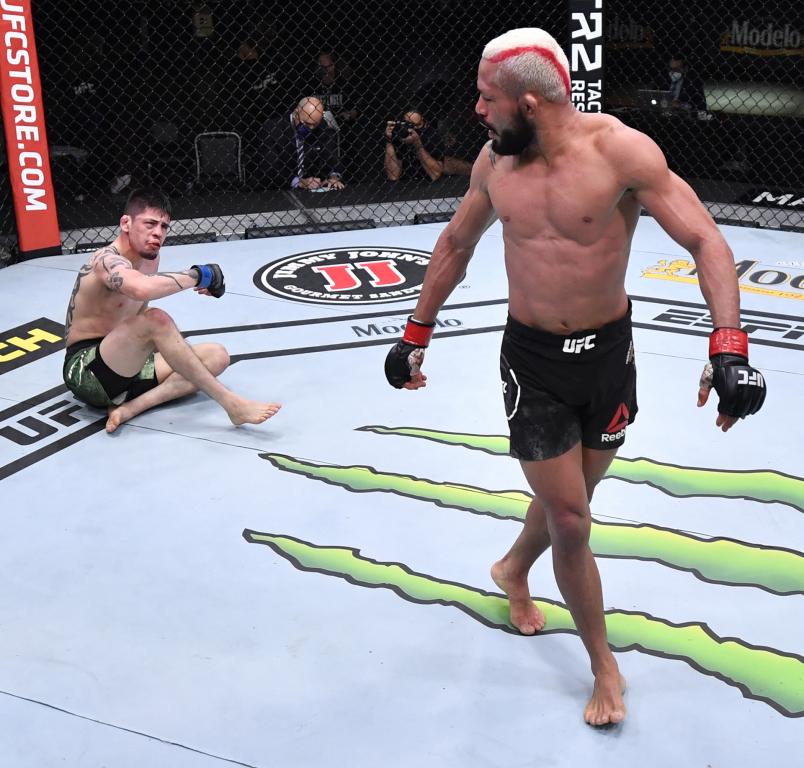 A couple days after the event, it was revealed the bout nearly didn’t happen, as Figueiredo was forced to make two trips to the hospital in the early morning hours the day of the fight. Eventually, he started feeling better and opted against withdrawing, pairing with Moreno to deliver an instant classic while still being significantly under the weather.

Moreno voiced skepticism regarding the champion’s declaration that he was ill, and all of those elements — the draw, Figueiredo’s illness, Moreno’s doubt — have served to ratchet up the intensity of this rivalry as they head into their rematch this weekend in Arizona.

“The lesson I take from the first rematch is to do what I didn’t do the first time,” joked the champion, who faced Benavidez twice in the span of five months last year, improving from a second-round stoppage win to a first-round submission victory in their tandem engagements. “With Benavidez, I learned a lot and I was able to show that in our second fight.

“With Brandon, in our first fight, I was feeling sick, and this time, I’ve had a full camp, I’m fully prepared, and it will be a very different fight.

“Brandon talks too much,” Figueiredo said when asked why things have become so heated between the two. “I was really sick the first time — I was 30 percent of what I can be — and I still won, so imagine me at 100 percent. He said I wasn’t sick and he’s going to knock me out this time, but I’m going to show him that he’s wrong.”

After fighting four times in 2020 and having achieved his goal of ascending to the top of the flyweight division, the confident champion has recalibrated things heading into this year, with an eye towards making sure no one knocks him off the flyweight throne.

“My goal is to defend my belt twice a year; to fight less and train more,” he began. “I want to train really hard and change my game up every year so that everyone that is coming in to challenge for my belt has a difficult time.”

And that begins this weekend with Moreno.

Having already spent 25 minutes battling tooth-and-nail with the Mexican challenger last year, Figueiredo knows what to expect from Moreno on Saturday but, more importantly, he knows what he’s capable of when he’s at his best.

Inside The Octagon | UFC 263: Adesanya Vs Vettori 2

Healthy, rested, and ready to get back to work, the man whose nickname translates to “God of War” is ready to do to the same thing to his latest repeat rival as he did the first man to share the cage with him on back-to-back occasions.

“I will beat him and prove to him that I am the champion,” he said confidently. “I will surround him in the first round — he’ll try to run, but I will catch him.

“I am going to knock him out and keep my belt.”