Champ Looks To Put An Exclamation Point On The UFC’s First Tetralogy At Home In Brazil
By Steve Latrell, on Twitter: @TheUFSteve • Jan. 16, 2023

There was a moment at the conclusion of the interim flyweight championship between Brandon Moreno and Kai Kara France when the reigning champion, Deiveson Figueiredo, who had been watching cageside, got up and entered the Octagon.

Standing across from one another, holding their championship hardware, Figueiredo and his longtime foe Moreno smiled, embraced, and shook hands as the reality that they would square off for a record fourth time began to sink in. The crowd in Dallas roared. It was a warm, ice-melting moment, a mutual display of respect and kinship by the creators and participants of some of the best flyweight fights in UFC history.

Or so it seemed.

“No,” Figueiredo clarifies, sitting in Brazil with UFC.com. “I just got in the Octagon just... as a Trojan horse. Just pretending to be his friend. But, in fact, we are not friends. It's a rivalry. When we get in the Octagon, we leave everything there to walk out victorious and this fourth fight will be no different.”

That’s fair. If the unification bout slated for the co-main event in Rio De Janeiro January 21 bears any resemblance to its predecessors, it will fierce, merciless, razor-close, and likely an instant classic. The epic tale thus far has not been built upon peace and love.

“Brandon Moreno and I don’t like each other. And when we step in the Octagon, we want to put on amazing show for the fans and everybody who likes to see Deiveson Figueiredo versus Brandon Moreno.”

The “everybody” he speaks of is literally most everybody who likes to watch fights. It’s hard to think of any other pairing of athletes that audiences would tolerate, let alone demand, to watch four times in a row. Far from being merely first-time novelty, their tetralogy feels like one of the great unfinished stories in all of combat sports.

You likely know the story to date so far: their epic inaugural meeting at UFC 256 ended in a majority draw that earned Fight of the Night honors. The follow-up at UFC 263 immediately felt like a third meeting was inevitable, despite Moreno taking the win and the belt with a third-round submission. The trilogy concluded at UFC 270 with Figueiredo reclaiming his strap via unanimous decision in another Fight of the Night effort. Nobody would have argued with an immediate and definitive tiebreaker to the series, but injuries to the champ’s hands had to heal first. Moreno would maintain his place in line, earning the interim strap while Figueiredo was on the mend. 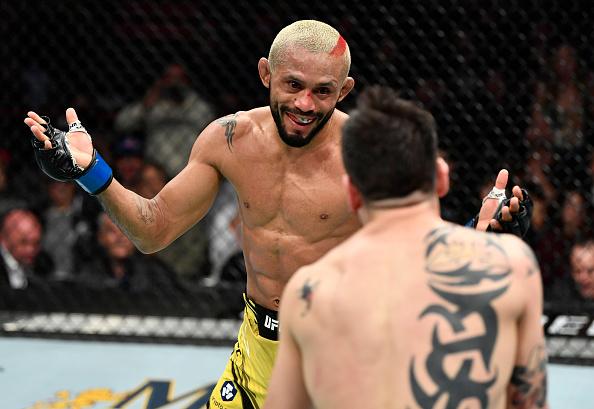 Deiveson Figueiredo of Brazil battles Brandon Moreno of Mexico in their UFC flyweight championship fight during the UFC 270 event at Honda Center on January 22, 2022 in Anaheim, California. (Photo by Chris Unger/Zuffa LLC)

Figueiredo hasn’t faced anyone except Brandon Moreno since December 12, 2020, and he hasn’t had the chance to think about any other fighter since long before that. It’s not a fact that brings any comfort to the champion as he looks ahead to Saturday.

“It’s a fight that’s stressing me out, it’s annoying,” he says candidly. “It’s my fourth fight with this guy. I’m definitely going there to end this once and for all.”

You can hear the restlessness in his voice as he seemingly counts down the minutes until this can all be over. His tone when talking about his opponent makes the case that familiarity can often breed contempt.

But that’s not to say he’s expecting the same ol’ Brandon when the Octagon door locks behind them.

“Well, anything can happen in MMA. He can change his game overnight, which is what I’m also doing. There are too many techniques that we can acquire to change our game.

One element that will be undeniably new this time around is homefield advantage. In Las Vegas, Houston and Dallas, respectively, the first three chapters of this saga were fought on neutral turf. Now, Mexico’s Moreno will face his opponent in the lion’s den: Figueiredo’s native Brazil. In a land where martial arts are a matter of national pride, the local fans are some of the most raucous, fervent fans you’ll find anywhere on the globe. Add to that fact that Brazilian fans haven’t witnessed a live UFC event since November 2019 (the show in March 2020 was closed to the public as COVID set in), and an electric atmosphere is all but promised as Rio cheers their champion and countryman.

“The belt stays home,” Figueiredo promises. “I'm feeling 100% healthy. My expectation for this fight is to come out with the win and make the Brazilian fans who will be attending the show really happy.”

He’s been training in Brazil, too, in Belem do Para. Given how good he’s feeling these days, he doesn’t foresee a time he would train anywhere else. 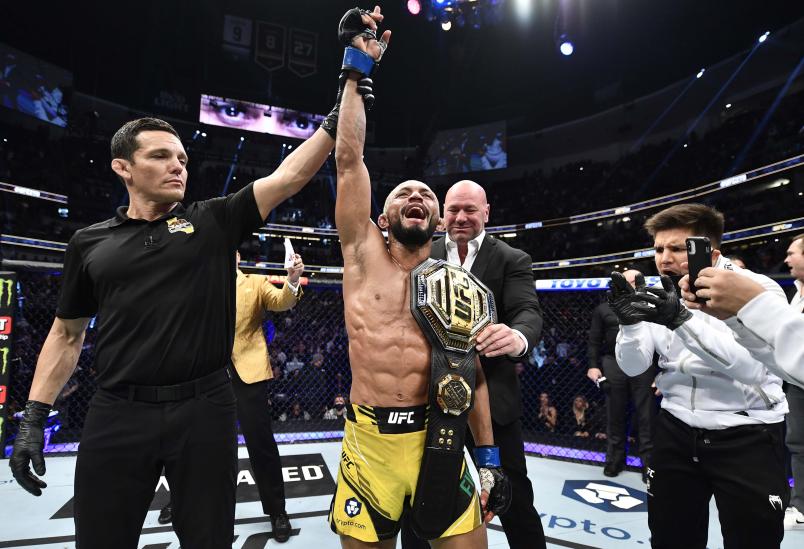 Deiveson Figueiredo of Brazil reacts after his decision victory over Brandon Moreno of Mexico in their UFC flyweight championship fight during the UFC 270 event at Honda Center on January 22, 2022 in Anaheim, California. (Photo by Chris Unger/Zuffa LLC)

“You will certainly see the best Deiveson Figueiredo because of the focus and discipline I’ve been having throughout this camp.”

He “absolutely” believes that this series with Moreno will one day be recognized as one of the greatest in the history of the company, but he’s adamant that it’s the final chapter between the two, citing an  eagerness to move on once a hand gets raised Saturday night.

“I want to test myself at bantamweight. Regardless of the outcome,
I’m going there to get this win and then test myself at 135. I want to go up to 135 as soon as possible. I’m about to be 35 years old and I don’t want to put my body through too much at 125.”

It’s a move that makes some sense. Figueiredo’s initial rise to champion was slowed by some trouble on the scales in his first title fight with Joseph Benavidez.

“Flyweight is a weight class where I have to do everything right to make weight and that stresses me out a lot. That’s why I want to test myself at 135.”

And as he looks at the bantamweight landscape, does he like what he sees?

“I’ve noticed some things and I’m sure I’ll be a good fit among the best there.”