Deiveson Figueiredo Expects To Be The Flyweight King

Deiveson Figueiredo vows that he won't leave Fight Island without the UFC flyweight belt wrapped around his welt.
By E. Spencer Kyte, on Twitter @SpencerKyte • Jul. 17, 2020

In the days leading up to his February clash with Joseph Benavidez for the vacant flyweight title, Deiveson Figueiredo radiated confidence.

Coming off back-to-back dominant efforts and brandishing a stellar 17-1 record overall, the 32-year-old Brazilian, who grew up on a small farm some 3,000 miles away from the site of the biggest fight of his career, was certain that on Saturday, February 29, he was going to walk into the Octagon, finish Benavidez, and return to his hometown of Soure as the undisputed UFC flyweight champion.

Figueiredo did get the finish, bringing the bout to a halt with a straight right hand down the pipe at 1:54 of the second round, leaving a dazed Benavidez slumped against the fence, but he did not leave with championship gold around his waist.

The day before he beat Benavidez, he lost to the scale, weighing in two-and-a-half pounds over the flyweight championship weight of 125 pounds. As a result, he forfeited 30-percent of his purse, and more importantly, his opportunity to win the title.

“I was very disappointed,” Figueiredo said of his unsatisfying victory in February. “My biggest goal is to win the UFC belt, so if I had been able to bring it home, it would have been a dream come true.

“There were a few issues with my diet, but the main reason was the manner I reduced my liquid intake,” he continued when asked what went wrong during the weight-cutting process. “I started to cut water too early. As the days went by, I started to feel abdominal discomfort and cramps.

“My team and I have corrected these issues and I am sure will make the weight this time.“

He did, and Saturday night, Figueiredo gets a second chance to claim the flyweight title in a rematch with Benavidez in the fourth championship bout contested during the UFC’s month-long stay on Fight Island.

Yet the Brazilian’s pre-fight miss on the scale wasn’t the only controversial moment from the first meeting between these two.

After a spirited first round where both landed their share of quality shots and appeared poised to engage in a frenetic to-and-fro, the tenor of the fight shifted just ahead of the two-minute mark of the second round.

As Benavidez stepped forward to close the distance, Figueiredo sat down a little, resulting in a clash of heads, with Benavidez clearly getting the worst of it. 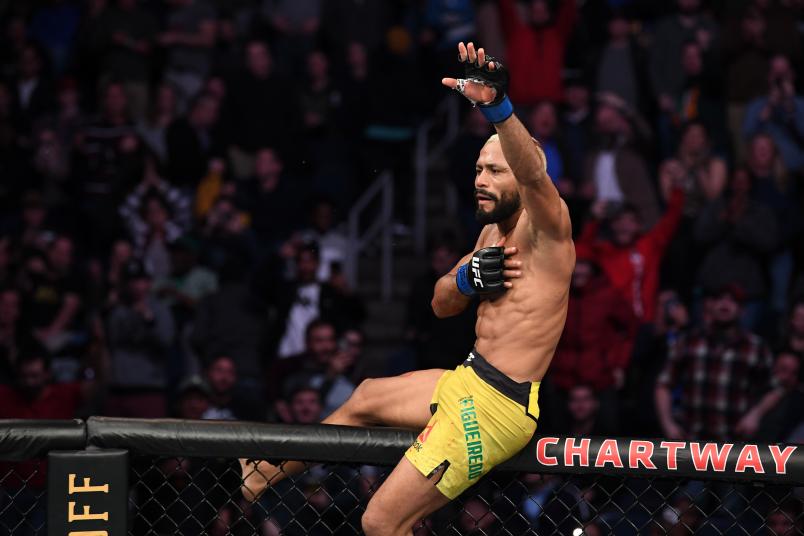 The veteran contender took a step back and pawed at his hairline, where a stream of blood had already begun to flow down his forehead. As he shuffled left looking to gain a little space and clear the obvious cobwebs from his head, Figueiredo remained in pursuit, stalking his wounded opponent.

After Benavidez once again wiped at his head with his left hand, the Brazilian uncorked a laser beam of a right hand that landed clean and floored the American. The follow-up blows were academic — Benavidez was out, the fight was over, and another controversial wrinkle was added to the footnotes of this flyweight championship fight.

“The clash of heads was an accident; it wasn’t my fault,” said Figueiredo. “Benavidez was trying to strike me and I was defending myself. It had nothing to do with the final sequence and subsequent knockout.”

As certain as the Figueiredo is that the accidental foul played no part in the outcome of the fight, it’s impossible to know for sure.

What complicates matters more is that 10 weeks later at UFC 249, the bantamweight championship between Henry Cejudo and Dominick Cruz also featured an impactful clash of heads. Unlike in Figueiredo’s first meeting with Benavidez, time was called as Cejudo was clearly dazed by the blow.

Shortly after the restart, the former two-division champion connected on a heavy knee strike that triggered the finishing sequence, prompting many to wonder if things would have been different had Benavidez been given a moment to recover the same way Cejudo was against Cruz.

The combination of Figueiredo missing weight and the clash of heads made UFC President Dana White immediately express his desire to have these two rivals meet again, and now that it’s upon us, it’s the swift and powerful Brazilian who heads into the rematch facing a bevy of questions, but buoyed by the information he gleaned from spending seven minutes inside the Octagon with Benavidez earlier this year.

“I will knock Benavidez out again and make it clear that it had nothing to do with the weight,” Figueiredo said emphatically. “I know his game and all his strategies; he won’t stand a chance.

“Benavidez has a lot of stamina, so he is able to keep his pace, but this time, I am more familiar with his game, so he won’t even have a chance to strike me,” he added. “He should be worried.”

One hundred and forty days after their first meeting in Norfolk, Virginia, Benavidez and Figueiredo will meet for a second time, more than 7,000 miles away from where they first clashed, with both men still clinging to the dreams they carried into their initial encounter — the former looking to finally claim the flyweight title many forecasted he would win upon the division’s inception; the latter eager to make up for his February miscue, silence his doubters, and bring championship gold back to his community in Soure.

“Unfortunately, things didn’t go as planned,” Figueiredo said, reflecting on returning home without the title in early March. “I won the fight and in my mind and in their minds, that’s what really matters.

“Now I will have the chance to prove that I am the champion.”

Sequels aren’t usually better than the original, but something tells me that Part Two of this series will buck that trend, bringing closure to this lingering rivalry and a new champion to the flyweight throne.

Figueiredo is certain he will be victorious.

“I have changed a few things, but the main plan remains the same: knock him out or submit him.”