In a career of exhilarating highs and crippling lows, here are Frank Mir's seven defining moments... 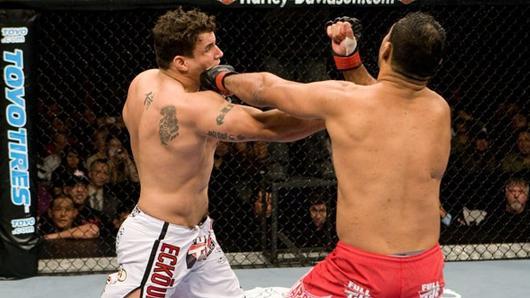 One of the top heavyweights of this era, two-time UFC heavyweight champion Frank Mir has been quietly battling his way back to the top for a shot at a record-tying third belt, defeating Mirko Cro Cop and Roy Nelson in recent bouts. On December 10th, he will travel to Toronto for a UFC 140 rematch with “Minotauro” Nogueira, and a win will be precisely what he needs to end 2011 on a high note and set the stage for a big 2012 campaign. Here are his seven defining moments...

Ian Freeman – July 13, 2002 – UFC 38
Result – Freeman TKO1
Four months after Mir submitted Roberto Traven in his UFC debut in November of 2001, he needed only 46 seconds to submit veteran Pete Williams at UFC 36. Now the question wasn’t if he would make it to the heavyweight title, but how soon. And in how many seconds. But as the UFC made its initial trip to the UK for London’s UFC 38 show, Mir was pitted against a man in Ian Freeman who had more to fight for than just a paycheck. Freeman’s father was fighting cancer, and as it turned out, he passed away the day before the bout. Freeman, who dedicated the fight to his father, didn’t know of the death, and he poured his heart into the Mir match, stopping the highly-touted Mir at 4:35 of the first round. It was an emotional win for Freeman and a devastating ‘back to Earth’ loss for Mir.

Tank Abbott – February 28, 2003 – UFC 41
Result – Mir Wsub1
With his aura of invincibility shattered, Mir was brought back seven months later to face off against returning brawler Tank Abbott, who was fighting for the first time in five years. For some observers, it was as if Mir was being set up as the sacrificial lamb for Abbott’s return; to others, it was the other way around, as Mir was going to show Abbott that this wasn’t the old UFC anymore. The latter proved correct, as Mir easily submitted Abbott with a toe hold in 46 seconds.

Tim Sylvia – June 19, 2004 – UFC 48
Result – Mir Wsub1
Mir took the win over Abbott and two more victories over Wes Sims and parlayed them into a shot at the vacant UFC heavyweight title against Tim Sylvia. Of course, Mir’s image had taken a hit with the loss to Freeman, but a win over Sylvia would erase those memories, and that’s what Mir did, taking only 50 seconds to lock Sylvia’s arm up and break it, forcing a stoppage to the bout. Frank Mir was now UFC heavyweight champion, and the future was seemingly bright and endless until a motorcycle crash three months later nearly ended it all.

Marcio Cruz – February 4, 2006 – UFC 57
Result – Cruz TKO1
A devastating motorcycle crash in September of 2004 broke Mir’s leg in two places and forced him to the sidelines. It was questionable whether he would ever fight again, and eventually he was stripped of his UFC heavyweight championship. After an arduous rehab process, Mir announced that he was coming back in 2006. The buzz got going immediately, and when his opponent was announced as Brazilian Jiu-Jitsu expert Marcio Cruz, most figured that Mir would be able to mount enough of an offense to take out the fairly inexperienced (MMA wise) Cruz. Uh-uh. Cruz cut Mir and ground and pounded his way to victory in what was a stunning upset. Said Mir after the bout, “I’m greatly disappointed. It was too much time off. I thought I was ready, but I can’t give up.”

Brock Lesnar – February 2, 2008 – UFC 81
Result – Mir Wsub1
Given a final shot to turn things around, Mir submitted Antoni Hardonk at UFC 74 in August of 2007 and then was seemingly brought in again as the sacrificial lamb to face UFC newcomer Brock Lesnar. But after almost getting steamrolled by the former pro wrestler, Mir showed the presence of mind to look for submissions while under attack, and when he got Lesnar in a kneebar, it was game over for the future UFC heavyweight champion. More importantly, the win resurrected Mir’s career, got him a coaching stint on The Ultimate Fighter and a shot at Antonio Rodrigo Nogueira’s interim belt. Would he be able to capitalize?

Antonio Rodrigo Nogueira – December 27, 2008 – UFC 92
Result – Mir TKO2
One of the greatest heavyweights of all-time, Antonio Rodrigo ‘Minotauro’ Nogueira was riding high in December of 2008. After becoming the first man in history to hold heavyweight titles in both the UFC and PRIDE, he also gained a whole new fanbase as a coach on season eight of The Ultimate Fighter. But Mir, his opposing coach and UFC 92 opponent, put an end to the Brazilian legend’s big year in emphatic fashion, showing off new facets of his game as he became the first man to TKO Nogueira. It was a sad night for Nogueira fans, but a joyous one for fans of Mir, who had finally put the demons of his motorcycle accident aside to get back to the top of the MMA world. On December 10th though, they’ll meet again.

Cheick Kongo – December 12, 2009 – UFC 107
Result – Mir Wsub1
After losing the interim title in one-sided fashion in his UFC 100 rematch with Lesnar, Mir was left with a dilemma. No one was going to want to see him in a rubber match with the champ unless he made some changes in his training camp and issued an immediate statement to the world in his next fight. He did both, bulking up to 264 pounds and then destroying Cheick Kongo in just 72 seconds. Suddenly, Mir was back on everyone’s heavyweight title radar, and though he lost to Shane Carwin at UFC 111 on March 27th for the interim belt, two solid wins over Mirko Cro Cop and Roy Nelson got him back on track heading into December 10th’s rematch with Nogueira.