Read on for the defining moments of UFC on FOX Sports 1 headliner Chael Sonnen... 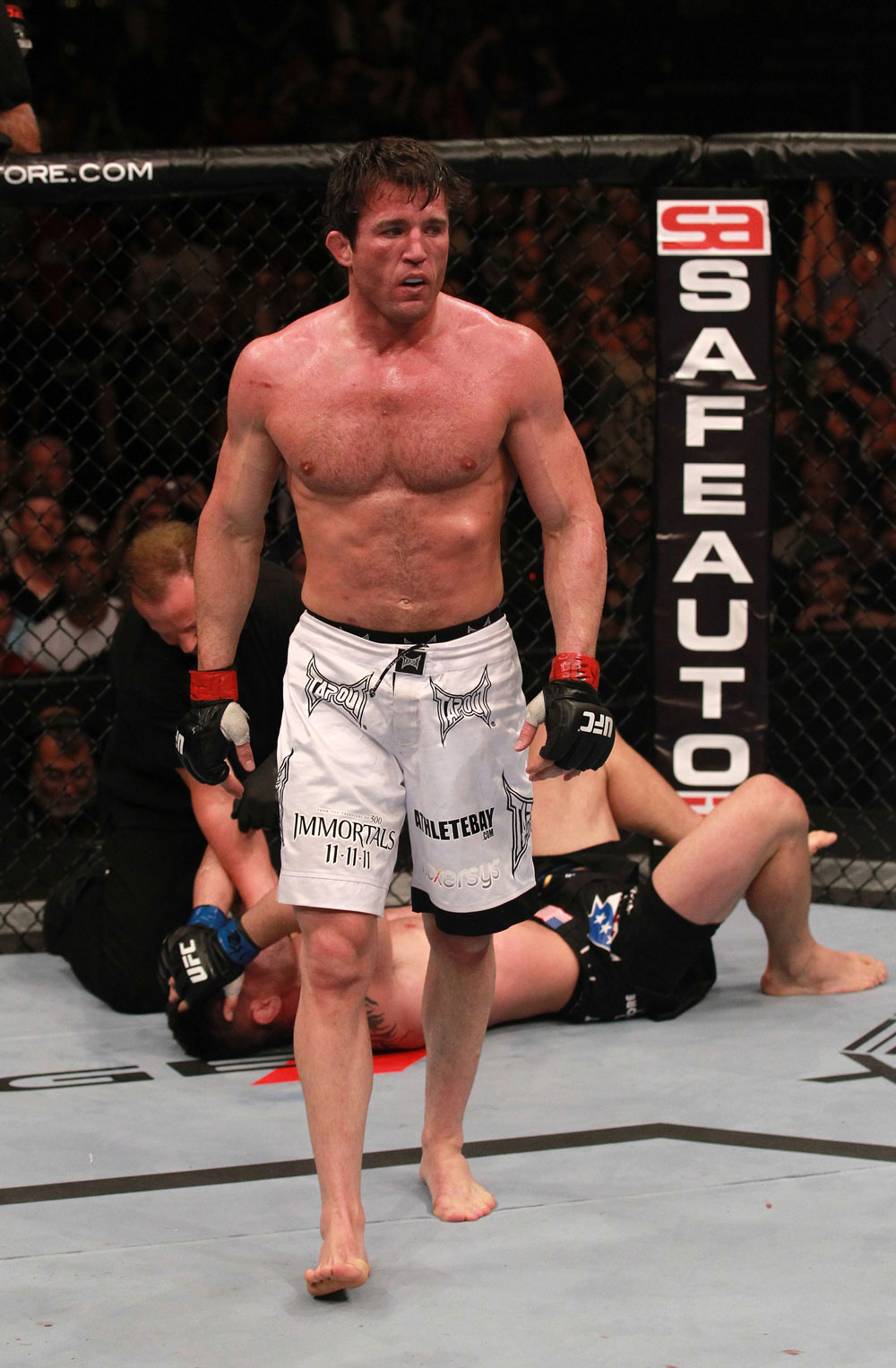 On August 17, former world title challenger Chael Sonnen returns to the Octagon to take on Mauricio "Shogun" Rua in the UFC on FOX Sports 1 premiere event. Here are the defining moments of the "Gangster from West Linn."

What happened – When Sonnen faced off with Jeremy Horn at UFC 60 in 2006, he was fresh from his first Octagon victory over someone who had beaten him previously, Trevor Prangley, and 23 fights into a career that began in 1997, there was no better time for some more redemption, considering that Horn held two wins over him. It didn’t happen though, as Sonnen succumbed to an armbar in the second round. It would be nearly three years before he returned to the UFC.

What was said – “The one thing with Horn is that he is so doggone crafty and you would almost have to fight him to understand what I mean,” said Sonnen before the fight. “So physically, for 15 minutes I need to pay attention and focus in on a couple of positions that he gets in where he is real dangerous. But mainly what I take from those fights is a mental thing. The first time I fought Horn, I was scared of him. I’ve been scared of a lot of guys but you’ve got to walk out there and fight them anyway. The second time, I believed ‘Jeez, I can really beat this guy,’ but pretty much the whole fight I was just waiting for him to catch me. I remember even thinking ‘is he gonna catch me now? Is it gonna be in this round or in this position?’ So mentally, things are different. I now know I can beat Jeremy Horn, and I know I’m going to beat Jeremy Horn, and there’s a big difference mentally.”

What happened – The rivalry with Silva doesn’t mark Sonnen’s first encounter with one of Brazil’s finest. There was the two fight series with then-unbeaten Paulo Filho, the WEC middleweight champion considered to be the best middleweight not under contract to the UFC. In their first bout, Sonnen appeared to have Filho knocked out at one point, but the Brazilian weathered the storm to score what was then seen as a very controversial submission win. Sonnen would even things up with the troubled Filho with a bizarre decision win nearly a year later, but with Filho not making weight, the WEC belt was no longer on the line. Next stop for Sonnen? Back to the UFC.

What was said - “I hit him on our feet and he went out and in fact, I caught him,” recalled Sonnen. “I walked all the way around him and grabbed him. In hindsight I should have just let him fall forward. But I was so excited because I thought it was over and I told the ref “he’s out.” And he was. He wasn’t moving or budging, but of course, I’m laying on top of him. For whatever reason, that was the route I took.”

“It hurts,” he continued. “I don’t know what a moral victory means. If the shoe was on the other foot and I got handed one that I didn’t quite earn, I’d feel just as good about it. I’d be completely content and proud of myself. At the end of the night, it’s whoever gets his hand raised, and so it hurt a lot. It kept me up at night. I got right back into the gym, but I was going through the motions and it was really difficult. I didn’t know how it would play out and whether I’d have this void forever. I’ve had a lot of disappointments in athletics over the years and they hurt a lot. But that’s the risk you take. It’s a two-man sport and only one guy’s gonna win.”

What happened – When Sonnen returned to the UFC in 2009, the result was familiar to those who followed his Octagon career, as he was submitted by Brazilian Jiu-Jitsu ace Demian Maia at UFC 95. But with his back against the wall, he pulled off a hard fought three round victory over New Jersey’s Dan Miller three months later, beginning his run to a world title shot against Anderson Silva and making it clear that this time, he was in the UFC to stay.

What was said – “UFC’s got the tradition, and when I was a young man and went to bed at night, it was the UFC I was dreaming about,” he said before the Maia fight. “You always want to be satisfied and happy with your situation, and I always was, but in the back of the head, there’s no way to deny or pretend that this isn’t exactly what I was hoping to happen.”

What happened – Sonnen was always a compelling interview, but it was around his UFC 104 bout with Japanese contender Yushin Okami that the rest of the world began to catch on, and the Oregonian became to amp things up in terms of promoting a possible fight down the line with champion Anderson Silva. Of course, there was the business of beating Okami, not an easy task at all, especially with “Thunder” bringing a three fight winning streak into the bout. But Sonnen made his three round decision win look easy, and now people considered him a legit contender for the title. He would need to keep winning though and keep things intense in training camp. So to help him with the latter part, he brought in none other than Yushin Okami.

What was said – “You don’t want to get beat by anybody, but especially him,” said Sonnen before the fight. “I gotta prepare for a guy and try to hype a fight with a guy that doesn’t even understand what hyping a fight means. I’m a one man band in this thing. I’m going at it alone, and when we get in the ring, if he backs up like he likes to always do, there’s just no end game here – there’s no way to win. So anyway, I’m just gonna go and beat the guy up because it’s the only thing that he and I can do together in friendship.”

“When the music hits those speakers, I will suck it up and make that walk,” he said. “And if I’ve got to take my medicine like a man, I’ll take it like a man, but either way, I’ll be in that ring on the 24th. And if Okami or anybody else wants to dispute something, I swear to goodness I will give them their opportunity. And I’ll end it on this – Yushin Okami is coming off an injury. Nobody is as good returning from an injury as they were prior to their injury, and I could’ve beat Okami when he was tough.”

“I want to be the champ and that’s it,” Sonnen continued. “If Anderson gets beat, I no longer want to fight Anderson. I don’t blame him for going up to light heavyweight – it’s a lot easier division than ours. I think there’s a false mystique when he flies up to light heavyweight and beats up these slow, unathletic guys. ‘Oh my goodness, he’s the king of two divisions.’ Well sure, anybody can move up a weight class. Look at Randy (Couture). Randy slid up from 205 to heavyweight and he wins a title every time he does it. The toughest guy to fight is the one a weight class below you. We’d have the same problem at 185 if one of the ’70 pounders moved up – ‘jeez, this guy’s a little faster than what we’re used to.’ So I, for one, am not impressed that Anderson went up to 205 and beat up some slow light heavyweights.”

What happened – 4-1 with four finishes and one controversial decision defeat since his title fight loss to Silva in 2007, Nate Marquardt was one win away from a return meeting with the champion and he was favored to get the job done against Sonnen, whose pre-fight rhetoric was reaching epic proportions. But the man soon to christen himself as “The Gangster from West Linn” took Marquardt by surprise with his speed and control of the Octagon, and while both guys looked like they had been in a bat fight and not a fistfight at the end of three rounds, it was Sonnen who took the win and earned his shot at “The Spider.”

What was said – “I don’t want to be an also-ran. I want to be king of the mountain and I think I can beat any man God ever made.”

What happened – Not much can be said about this fight that hasn’t already. Suffice to say that it was one of the best in UFC history, a nearly five round battle that saw Sonnen shock the world by dominating the pound for pound king for over four of those rounds. But it was the final seconds that the world will remember, as Silva crushed Sonnen’s championship dreams with a triangle armbar that forced the challenger to tap out with only 1:50 left on the clock.

What was said – “No one tunes in to see Anderson Silva,” said Sonnen before the fight. “The guy’s the worst Pay-Per-View draw in the history of Zuffa, and he’s a four-year undefeated athlete with one sponsor. There is one company on the face of the planet that’s willing to put their name on that guy. He walks into a room, he doesn’t have any fans, the media doesn’t want to talk to him, you watch the UFC promotion and it’s the Chael Sonnen show and it might as well be. Anderson Silva is about as entertaining as watching paint dry so if you can keep the mic and camera on me; I’ll sell some tickets. I can drag Anderson Silva outside the hotel any day I wanted to and beat him up, But I’m gonna wait until August 7th and I’m gonna do everything I can to make sure millions of people are watching me do it.”

What happened – The world wanted and needed to see a rematch between Sonnen and Silva, but legal and commission issues kept MMA’s most compelling figure on the sidelines while the champion knocked out Vitor Belfort and Okami in title defenses. When Sonnen was cleared to return in October of 2011, anticipation was at a fever pitch as American hero Brian Stann squared off with the American gangster. And this time, the “bad guy” won, as Sonnen dominated before scoring his first finish win since 2007 via second round submission.

What was said – “It’s almost the opposite of the last guy I fought,” said Sonnen of Stann. “The last guy I fought was a little dancing chicken, and this guy’s more of a man that will come out and draw a line in the Octagon and say put your toe on it and let’s go.”