Already viewed as an athlete with incomparable skills, she also displayed a trait that made her a natural in mixed martial arts.

“I was a very tough teenager. And it’s funny, because I had never thought of becoming a fighter, but now I’m sure I was born to be a fighter,” Cyborg recalled. “I was 19 years old and I was playing a handball exhibition match in Curitiba when I was seen and told I could make a good fighter.

“I always enjoyed challenges, and I put a lot of faith and determination in order to accomplish them.”

A few years and a lot of training later, Cyborg holds a 16-1 professional record (1-0 UFC), is the current Invicta FC featherweight champion, and has emerged as arguably the best female fighter of her time.

Her first UFC bout in May, a spectacular debut that saw her knock out Leslie Smith in just over a minute, was a showcase bout before more than 45,000 in Curitiba, Brazil. Saturday, she returns to the Octagon to face Sweden’s Lina Lansberg in UFC Fight Night&rsquo;s main event in Brasilia.

Cyborg, who hasn’t lost a fight in over 10 years, says her impressive streak of success is the result of a lifetime of hard work, and that she has no plans of putting an end to it.

“I’m a perfectionist with everything I do. If I have to clean my house, I’ll be the best in the world at it,” she said. “Many times I wake up already tired, but I go to the gym because I like to be disciplined. Everything that’s happening in my life is the result of what I’ve been doing for a very long time.” 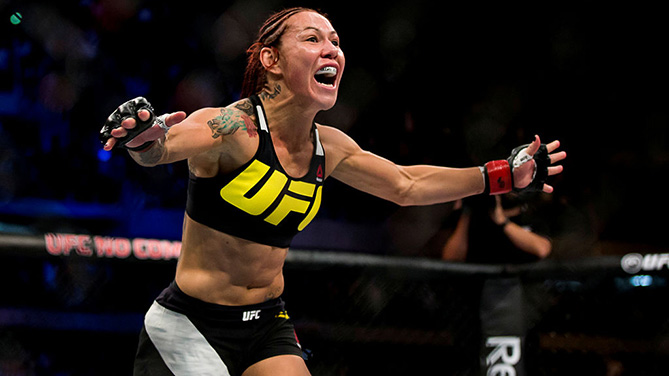 But when Cyborg first started, she barely received professional training and help, and struggled to schedule fights. Her first bout was in 2005 in Sao Paulo, and she ended up submitted in the first round.

She returned to the gym, continued her training and development and a few months later became one of the very first women to feature in a main event of a MMA event, defeating Erica Porto in the first round.

Walking alongside her during these early steps into the sport was master Rafael Cordeiro, now the head coach of Kings MMA, and then-trainer at the Chute Boxe Academy. Although he has many memories of his time with one of his prized students, he highlights one word to describe Cris Cyborg:

“She always had a brave spirit, that’s her main weapon against any opponent,” Cordeiro said. “Cris used to train with men at the gym, and the guys knew they shouldn’t take her for granted because she wasn’t afraid, and she would always keep moving towards them.”

Through all her success, Cyborg always considers herself Mrs. Gorete’s daughter, a loving nod to her beloved mother, Bersima “Gorete” Moraes, who is a talented seamstress in Curitiba.

In UFC 198’s “Embedded” series, Cyborg visited her mother in her hometown and ended up wearing a beautiful, very unique dress during Fight Week that was handmade by the matriarch of her family.

That admiration has become inspiration, and the fighter says she always thinks of her mother when preparing for a challenge.

“I inherited a lot of good things from my mom, who started working at 8 years old,” Cyborg said. “She wakes up, goes for a swim, works out and spend the rest of the day doing her stuff. My mom works all day long, she’s unstoppable, and that moves me.”