Holly Holm has maintained a stoic gaze on her face throughout fight week. But her smile lights up any room she enters, and her muscular physique intimidates.

As a blizzard continues to pummel the city that hosts UFC 208, Holm is pushing through her own storm ahead of her UFC women’s featherweight title fight Saturday night at Barclays Center.

“The Preacher’s Daughter” is the star of the show. She’s a former boxing world champion, she was the first woman to beat Ronda Rousey, and she is carrying the load when it comes to media obligations during fight week.

RELATED STORIES: Holm on brink of history | Holm hates to lose, talks about it on Live w/ Kelly | Holm inspired by Super Bowl | de Randamie ready for her moment

Holm is coming off two-straight losses that have slowly chipped away at the mystique she captured of her epic win over the legendary Rousey. But Holm’s spirit, her refusal to accept defeat – all of this is motivating her as she attempts to become the first-ever two-division UFC women’s world champion.

“Having two losses … yes, it could’ve broken me down,” Holm said during a break at her Ultimate Media Day appearance at iconic Gleason’s Gym, in a shadow of the world famous Brooklyn Bridge. “But I choose not to take that thought. I want to always be pushing forward.” 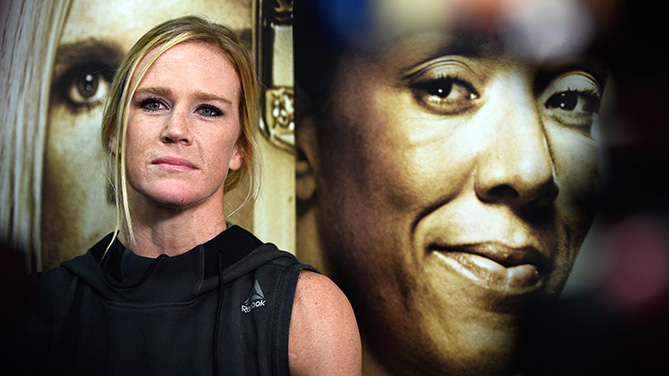 If she were to lift a second world title, Holm will cement her legacy as one of the all-time great fighters in combat sports history. She has truly done it all.

While some fighters may look for excuses, Holm searches for the next challenge.

Down on the scorecards heading into the fifth round against Valentina Shevchenko last time out, Holm bounced off her stool with determination burning from her gaze. For her, the goal always is victory, under all circumstances.

Holm insists she isn’t done making history. On the contrary.

“I feel like a pioneer in a lot of ways. One thing I feel I’ve done is show how to take the uncomfortable road,” she said, dismissing any notion that her setbacks are career limiting. “Coming into MMA was a new path for me."

Her UFC path, Holm says, continues to be a motivating, challenging and enjoyable journey.

“Everybody talks about experience from boxing, but starting all over and fresh in this sport – I hope people can look at that and maybe it will inspire them to not think twice if they want to take a chance at something.”