Vitor Belfort was one of the UFC’s first stars, a 19-year-old with blazing hands and fight-ending power. But after losing his last two chances at becoming a two-time UFC champ, who expected the now 35-year-old Brazilian to open 2013 with the first of three knockout wins that had him knocking on the door of another title shot? Not the men he defeated - Luke Rockhold, Dan Henderson, and the fighter he kicked off the UFC’s year with on January 19 in Brazil, Michael Bisping.

That UFC on FX card got 2013 off to an explosive start, and when you consider that a week earlier, the Strikeforce promotion held its final show, opening up the door for several more top stars to make their way to the Octagon, it was going to be quite a year for the UFC.

2013’s first FOX event took place on January 26 at the United Center in Chicago, and Demetrious Johnson and John Dodson continued to put the flyweight division in a positive light, as they battled for five fast-paced rounds, with Johnson coming from behind to take a close, but unanimous, decision to retain his 125-pound crown.

Pay-Per-View viewers got a SuperFight to kick off the year on February 2, as Jose Aldo successfully defended his featherweight title with a close decision win over former lightweight champion Frankie Edgar. Antonio “Bigfoot” Silva also made a statement in his bout that night in Las Vegas, as he knocked out Alistair Overeem in the third round.

Two weeks later, Renan Barao submitted Michael McDonald in the fourth round to keep his interim bantamweight title intact, and then history was made on February 23, as the UFC welcomed women into the Octagon for the first time.

Not surprisingly, the woman chosen to lead the revolution was former Strikeforce champion Ronda Rousey, an Olympic Bronze medal winner who had the talent, charisma and attitude to take all the pressure on her shoulders and not just survive, but thrive. “Rowdy’ Ronda would get a stern test early on in her UFC 157 main event against Liz Carmouche, but moments after surviving a rear naked choke attempt, Rousey finished Carmouche with her trademark armbar. Now, said the first UFC women’s bantamweight titleholder, she felt like a true champion. 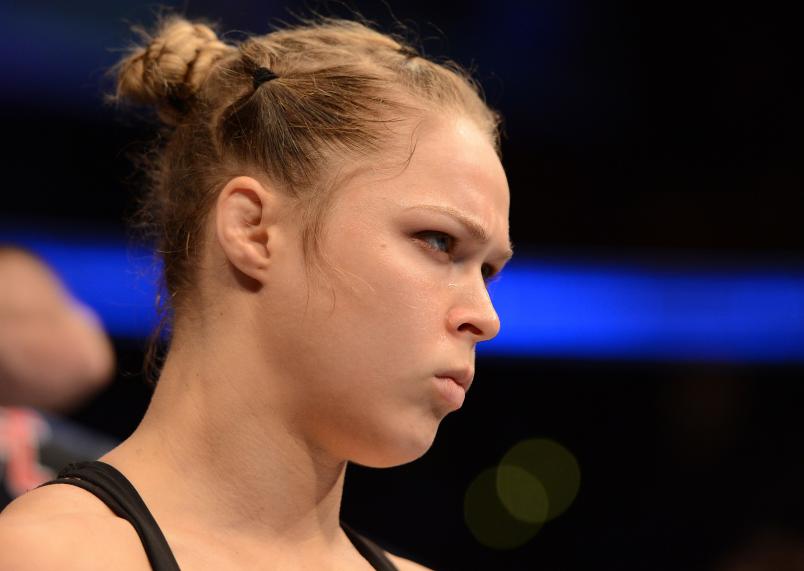 ANAHEIM, CA - FEBRUARY 23: Ronda Rousey stands in the Octagon before her women's bantamweight title fight against Liz Carmouche during UFC 157 at Honda Center on February 23, 2013 in Anaheim, California. (Photo by Donald Miralle/Zuffa LLC/Zuffa LLC via Ge

There would be a lot more Octagon magic produced by Rousey and her peers, but the men didn’t want to be left out, so what better fight would there be to headline UFC 158 in Montreal on March 16 than the welterweight grudge match between Georges St-Pierre and Nick Diaz? Seemingly years in the making, the two finally met at Bell Centre, and once again, GSP made it look easy, dominating from start to finish as he earned a five-round unanimous decision victory. That’s not to say there was no one to challenge the Canadian star, as the man who defeated Carlos Condit in the co-main event that night, Johny Hendricks, was closing in fast.

In April, Kelvin Gastelum completed an upset-filled run through the field on The Ultimate Fighter 17 by defeating highly-touted Uriah Hall to win the season title, and Benson Henderson won a Superfight over former Strikeforce champion Gilbert Melendez to retain his UFC lightweight title before Jon Jones and Chael Sonnen – coaches of TUF 17 – finally met in Newark, with Jones stopping the “Gangster from West Linn” late in the first round.

The UFC 160 event on May 25 featured heavyweight rivals Cain Velasquez and Junior Dos Santos in separate bouts, and the two secured their rubber match, as Velasquez stopped “Bigfoot” Silva a second time to retain his title, and Dos Santos knocked out Mark Hunt in the last round of a bout that earned Fight of the Night honors.

TUF Brazil’s second season produced a veteran winner in June, as Leonardo Santos replaced the injured Santiago Ponzinibbio and submitted William Macario in the second round. Rashad Evans also picked up a June win over Dan Henderson in the UFC 161 main event in Winnipeg.

At UFC 162 on July 6, many expected it to be business as usual when Anderson Silva defended his middleweight title against unbeaten Chris Weidman. Yet it was anything but that, as a showboating Silva got caught with a flush punch by Weidman in the second round and dropped to the canvas. A follow-up barrage brought in referee Herb Dean to stop the fight, and just like that, Weidman was the new 185-pound champ and an era in UFC history had ended.

Despite the shock of Silva’s first-ever UFC loss, the show must go on, and Demetrious Johnson remained Mr. Steady, as he put another title defense in the bank on July 27, this one via fifth-round submission over John Moraga. Also remaining untouchable was featherweight king Jose Aldo, as he defeated “The Korean Zombie,” Chan Sung Jung, via fourth-round TKO in the UFC 163 main event on August 3.

Another UFC first took place in Boston on August 17, as the launch of the new FOX Sports 1 channel featured a Fight Night card packed with stars. In the main event, Sonnen stunned “Shogun” Rua, submitting him in the first round. Also victorious were Travis Browne, Urijah Faber, Matt Brown and a young man who had been making a lot of noise in the UFC ever since his debut win in Sweden in April, Dublin, Ireland’s Conor McGregor. 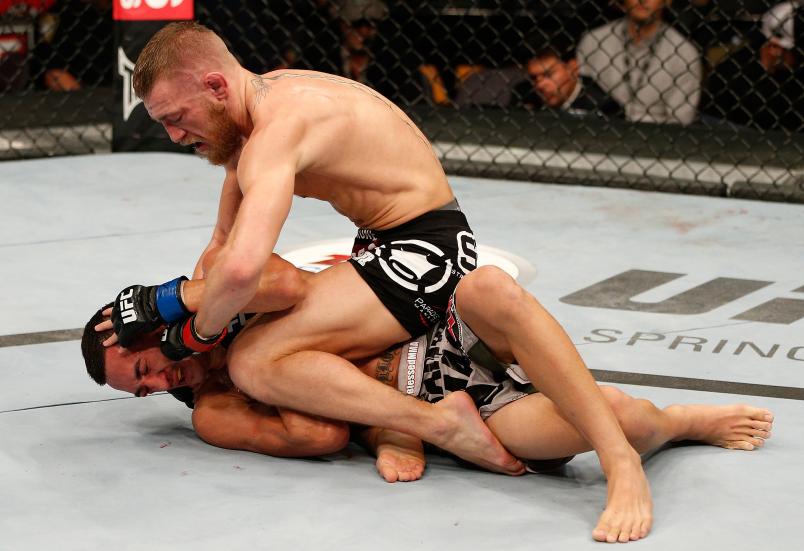 By late August, it was time for another eagerly-anticipated title fight, this one a rematch of a WEC bout between Benson Henderson and Anthony Pettis. Since their first meeting in 2010, won by Pettis, Henderson had won the UFC lightweight title and successfully defended it three times. But that would be all, as Pettis submitted Henderson in the first round to be crowned the new champ.

It was now “Showtime” at 155 pounds, but 50 pounds north in the light heavyweight division, Jon Jones was having a dominant and seemingly unstoppable reign at the top. But in the main event of UFC 165 in Toronto on September 21, “Bones” got the toughest test of his career in the form of Swedish contender Alexander Gustafsson. Yet just when it seemed that “The Mauler” was about to upset the champion and take the title, Jones rallied down the stretch to take a hard-earned unanimous decision victory.

In other UFC 165 action, Renan Barao retained his interim bantamweight title with a second round TKO of Eddie Wineland.

Houston would be the site for the rubber match between Velasquez and Dos Santos on October 19, but in the featured UFC 166 bout, it was all Velasquez, as he ran through “Cigano” en route to a fifth-round TKO win. The performance was perhaps the most impressive of Velasquez’ career, but even that didn’t overshadow the three-round brawl between Melendez and Diego Sanchez that was won by “El Nino” the hard way. 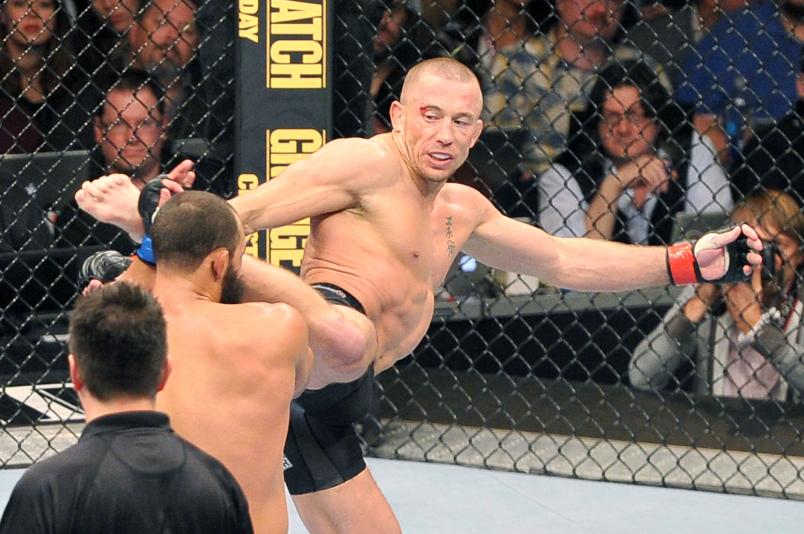 In November, the UFC celebrated its 20th anniversary with UFC 167 in Las Vegas, and it was a main event worthy of such an occasion, as St-Pierre was pushed to the brink by Hendricks in their welterweight title bout. When it was over, many felt that Hendricks had done enough to win, but the split decision went to GSP, who announced a month later that he was taking a break from the sport, leaving the 170-pound title vacant.

The Ultimate Fighter 18, coached by rivals Rousey and Miesha Tate, was the first season to feature men and women competing for individual titles, and at the season finale show on November 30, Julianna Pena won the women’s side and Chris Holdsworth did the honors for the men.

A bout that initially flew under the radar down under in Brisbane, Australia, Mark Hunt and “Bigfoot” Silva woke up the universe with their five-round war on December 7. Showing heart, determination and fight-altering power, the two heavyweights left it all in the Octagon in a fight neither of them deserved to lose. And neither did, as a draw verdict was rendered.

Hunt-Silva was going to be a tough act to follow for flyweight champ Johnson in his rematch against Joseph Benavidez on FOX on December 14, and while he and his challenger didn’t match the heavyweights in terms of action, “Mighty Mouse” did leave jaws hanging open with his first-round knockout win.

The biggest card of the year was still yet to come, and fittingly, it was the last event of 2013, as UFC 168 featured two world title rematches on December 28. In the main event, Weidman and Silva would meet again, while the co-main event would see Rousey defend her belt against Tate.

The co-feature went as expected, with Rousey getting a tough go from Tate before submitting her in the third round. But in the main event, Weidman’s repeat secondround stoppage of Silva was anything but routine, as a checked kick thrown by the Brazilian broke his leg, prompting the fight to be halted. Yet even more devastating was the possibility that Silva would never fight again, a possibility he eliminated as soon as he reached the hospital and asked the doctor when he could return to the Octagon.

That’s a champion, even without a belt. 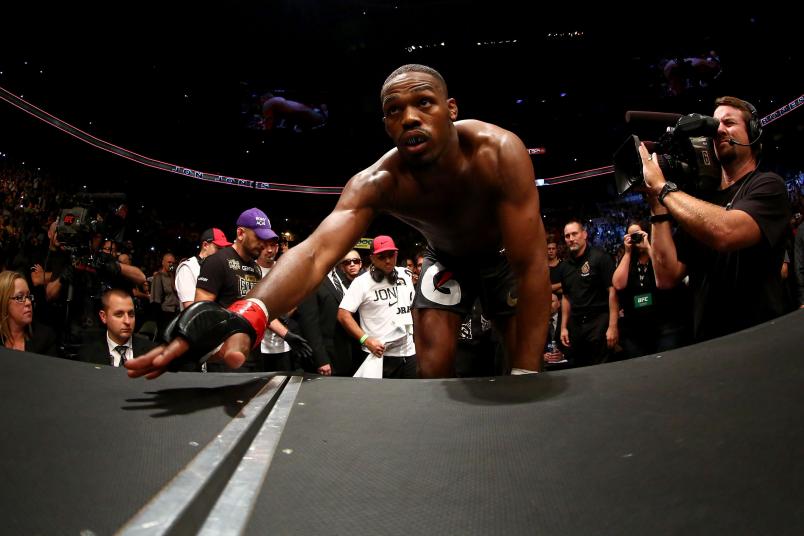 TORONTO, CANADA - SEPTEMBER 21: Jon 'Bones' Jones enters the Octagon prior to his fight against Alexander Gustafsson (not pictured) in their UFC light heavyweight championship bout at the Air Canada Center on September 21, 2013 in Toronto, Ontario, Canada. (Photo by Al Bello/Zuffa LLC/Zuffa LLC via Getty Images)

TORONTO, CANADA - SEPTEMBER 21: Jon 'Bones' Jones enters the Octagon prior to his fight against Alexander Gustafsson (not pictured) in their UFC light heavyweight championship bout at the Air Canada Center on September 21, 2013 in Toronto, Ontario, Canada
FIGHTS OF THE YEAR 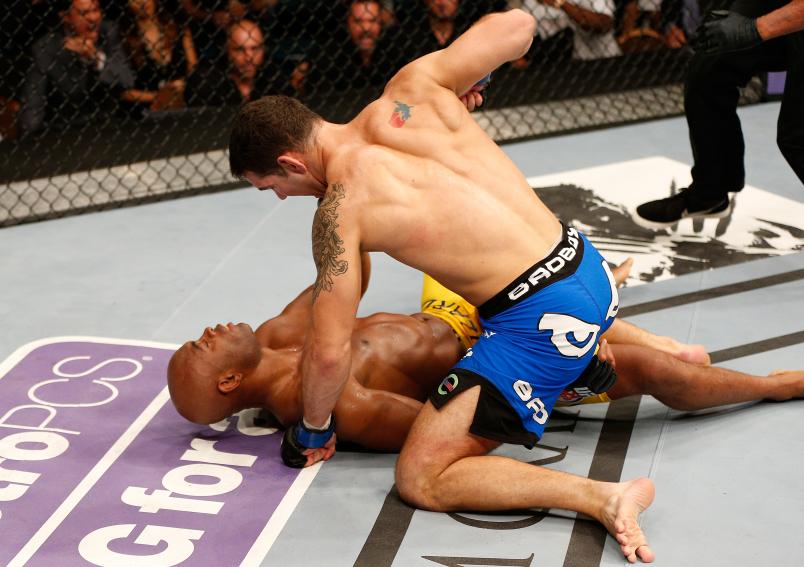 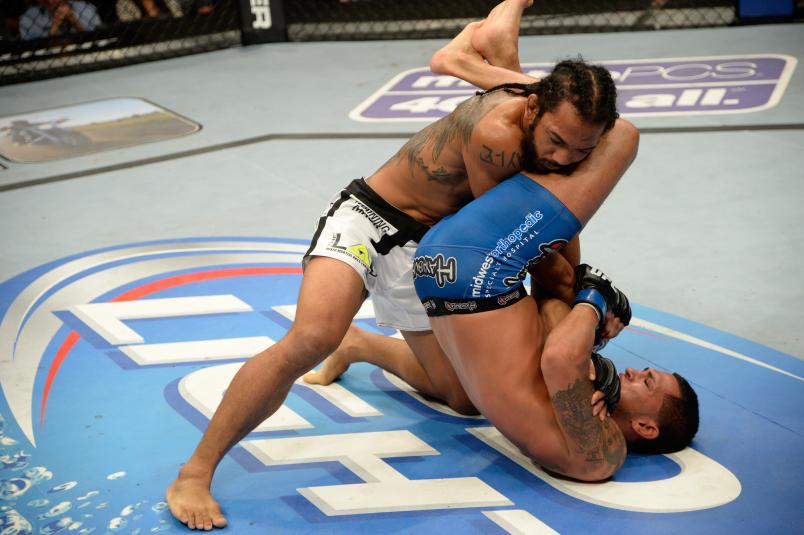