If 2011 was about sweeping changes in the UFC, with a FOX television deal, the first full year of bantamweights and featherweights in the Octagon, and the purchase of the Strikeforce promotion, 2012 was going to be about maintaining this pace and keeping fans happy with the fights and fighters they wanted to see. And that didn’t mean just United States fans, but those around the world.

So it was no surprise that 2012 began in the promotion’s new hotbed, Brazil. Returning to Rio de Janeiro after its ultra-successful UFC 134 event, UFC 142 on January 14 saw Jose Aldo successfully defend his featherweight title with a first-round knockout of Chad Mendes that saw Aldo run into the crowd after the bout ended to celebrate with his fans. It was a memorable moment to say the least for the hometown hero.

The first “official” event of the UFC’s landmark deal with FOX took place at the United Center in Chicago on January 28, with a network-televised card featuring Rashad Evans’ win over Phil Davis, a victory by Chael Sonnen over Michael Bisping, and an opener that saw Chris Weidman defeat Demian Maia. It wasn’t the most aesthetically pleasing set of results, but FOX viewers would get plenty of compelling action in the coming months and years.

With Georges St-Pierre sidelined by injury, top contenders Nick Diaz and Carlos Condit squared off the interim welterweight title at UFC 143 on February 4, Condit scraping out a hard-fought five-round decision win to take the belt.

On February 26, the UFC’s international team traveled to Japan for the first event in the Land of the Rising Sun since 2000, and UFC 144 was another rousing success, as former WEC lightweight champion Benson Henderson dethroned Frankie Edgar, Ryan Bader defeated Rampage Jackson, Mark Hunt knocked out Cheick Kongo and Anthony Pettis stopped Joe Lauzon on an action-packed, star-studded card. 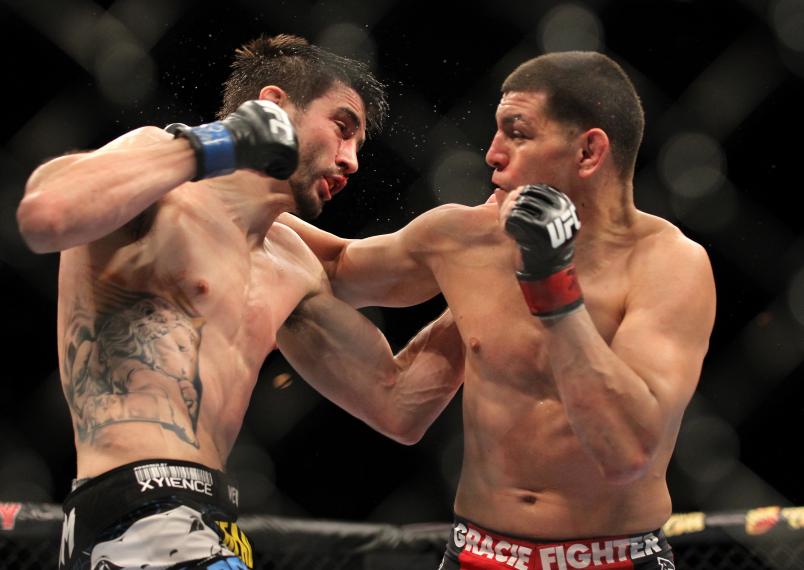 In March, a new weight class officially arrived in the UFC, as the Fight Night event in Sydney, Australia saw the first two bouts of the 125-pound flyweight division. Four of the top competitors in the world – Demetrious Johnson, Ian McCall, Joseph Benavidez and Yasuhiro Urushitani – would battle it out for the first UFC flyweight crown, and while Benavidez easily punched his ticket to the tournament final with a knockout of Urushitani, his opponent would take a little longer to determine, as Johnson and McCall fought to a draw.

Swedish star Alexander Gustafsson was the obvious choice to headline the UFC’s first visit to Stockholm on April 14, and he didn’t disappoint as he decisioned Thiago Silva, kicking off his move into the contenders’ race at 205 pounds. Of course, the champion of that division, Jon Jones, wasn’t slowing down any, as he proved when he defeated Rashad Evans in the main event of UFC 145 on April 21, defusing the feud between the former friends and teammates.

At UFC 146 in May, another young champion with a bright future, Junior Dos Santos, made it look easy in his first title defense, knocking out former two-time titleholder Frank Mir in the second round. Waiting in the wings for “Cigano” was the man he beat for the title, Cain Velasquez, who made a triumphant return in the co-feature, stopping debuting former Strikeforce star Antonio “Bigfoot” Silva in the first round.

On June 1, a successful but stressful experiment came to a close, as the first live season of The Ultimate Fighter finished up with Michael Chiesa defeating Al Iaquinta. The finale show capped off a 13-week season, the longest in TUF history.

A week later, Johnson and McCall met again, Johnson taking a decisive decision win to earn a spot alongside Benavidez in the UFC’s first flyweight title fight later in the year. That business settled smoothly, but that wasn’t the case for UFC 147 in Belo Horizonte, Brazil, as several changes to the card left fans wondering what was going to happen on fight night. Eventually, things settled, with Rich Franklin defeating Wanderlei Silva a second time and Brazil’s first two Ultimate Fighters, Cezar Ferreira and Rony Jason, being crowned.

There would be no upheaval in the highly-anticipated UFC 148 card in Las Vegas on July 7 though, as the most highly-anticipated rematch in history took place. Anderson Silva and Chael Sonnen engaged in a classic the first time around in 2010, but in the return bout, “The Spider” put it on Sonnen and stopped him early in the second round. In the co-main event. Forrest Griffin decisioned newly-minted Hall of Famer Tito Ortiz in the final bout of their trilogy.

Sidelined by a knee injury that forced him out of his UFC 148 rubber match with Urijah Faber, Dominick Cruz revealed that he was going to be out for a while, prompting the promotion to establish an interim title fight between Faber and Renan Barao that took place at UFC 149 on July 21. The unheralded Barao was dazzling that night in Calgary, as he won a clear-cut five-round unanimous decision and the belt. 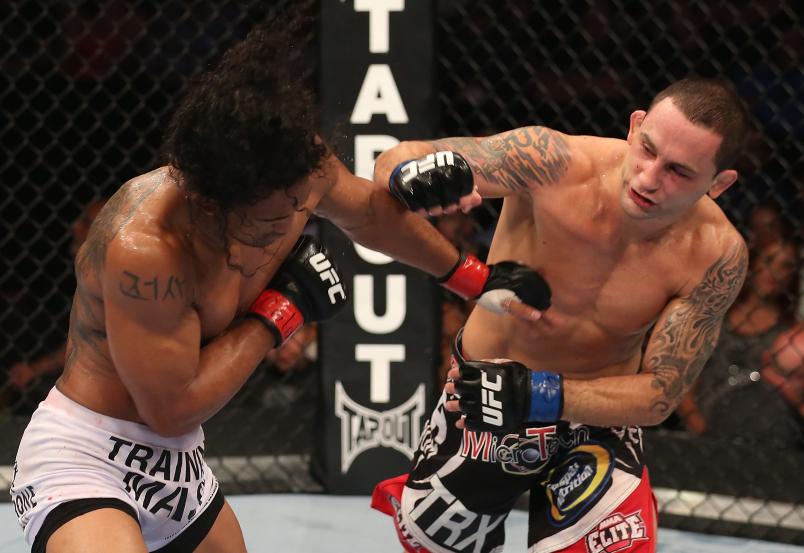 RELATED: A Decade's Dozen - The Upsets | The Submissions

After an action-packed FOX show on August 4 that saw “Shogun” Rua outlast a game Brandon Vera en route to a fourth round knockout win, lightweight stalwarts Henderson and Edgar met again at UFC 150 on August 11, and it was the same result, a razor-thin decision win for “Smooth” Benson.

At this point, the year was going as smoothly as it could be, despite some key injuries causing fight card shifts, but on August 23, everything hit a stop when Dan Henderson was forced from his UFC 151 main event on September 1 against Jon Jones due to injury and Jones opted against a short notice fight against Sonnen, prompting the UFC to cancel the event.

It was the first time in history that the UFC made such a move, and the company needed to come back strong with its next event on September 22, so it did just that. In the headliner of UFC 152 in Toronto, Jones returned to face Vitor Belfort, and after some rough moments early, he submitted “The Phenom” in the fourth round. Also that night, Demetrious Johnson became the UFC’s first flyweight champion, as he decisioned Joseph Benavidez in a five-round instant classic that showed precisely why the promotion brought the flyweights in.

Several changes rocked the organization’s UFC 153 event in Rio de Janeiro on October 13, so who came to the rescue? Middleweight superstar Anderson Silva, who agreed to move up to light heavyweight for the third time as a UFC fighter to face Stephan Bonnar on short notice. That decision certainly left the fans happy, as “The Spider” was in vintage form in scoring a first-round TKO of “The American Psycho.”

China became the newest international destination on the UFC’s itinerary on November 10, with a trip to Macao highlighted by a Cung Le knockout of former middleweight champion Rich Franklin, but a week later, all eyes were on Montreal’s Bell Centre, as Georges St-Pierre fought for the first time since knee surgery against Carlos Condit. Would GSP still be the same fighter after the long layoff? The answer was yes, as the welterweight champion rose from an early knockdown to win a dominant five-round unanimous decision victory over the game, but outgunned Condit.

FOX viewers got another championship fight on network television on December 8, but this time it was longer than 64 seconds, as Benson Henderson’s clinic against Nate Diaz went the distance but still kept the title belt firmly on the defending champion’s waist.

In Queensland, Australia a week after Henderson-Diaz, the Ultimate Fighter’s Smashes competition came to an end, with Robert Whittaker picking up a season title for Australia and Norman Parke doing the same for the UK. In the American version of TUF, it was Colton Smith winning the season 16 crown.

Now all that was left was for the heavyweights to make their final statement of the year, and at UFC 155 in Las Vegas on December 29, Cain Velasquez regained his title with a shutout five-round decision win over Junior Dos Santos, setting the stage for a 2013 rubber match. 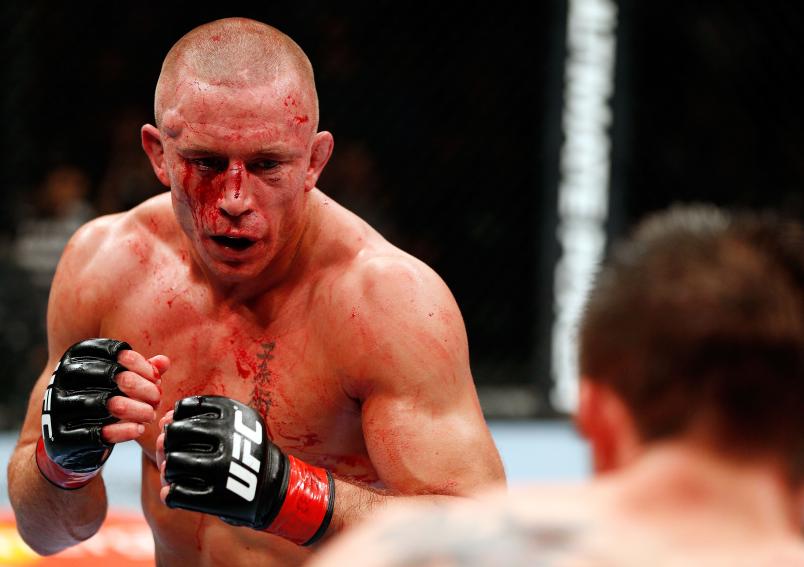 MONTREAL, QC - NOVEMBER 17: Georges St-Pierre (L) fights against Carlos Condit in their welterweight title bout during UFC 154 on November 17, 2012 at the Bell Centre in Montreal, Canada. (Photo by Josh Hedges/Zuffa LLC/Zuffa LLC via Getty Images)
FIGHTS OF THE YEAR 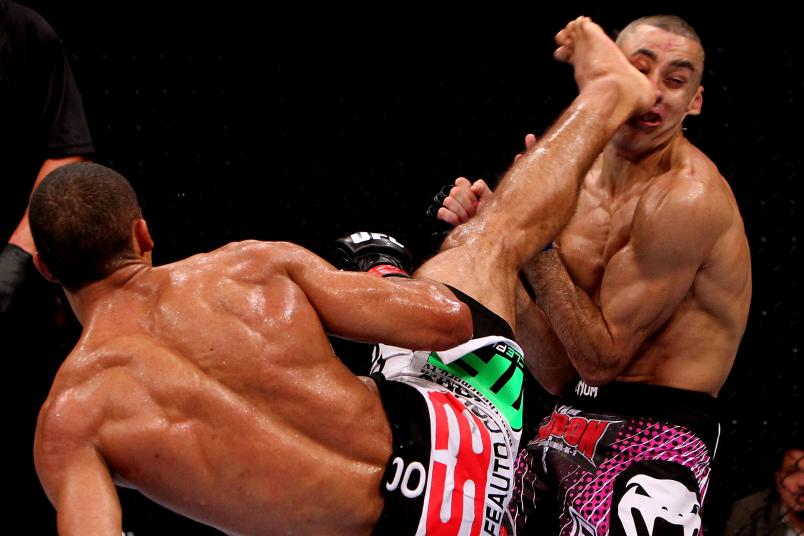 RIO DE JANEIRO, BRAZIL - JANUARY 14: Edson Barboza (L) knocks out Terry Etim (R) with a spinning back kick in a lightweight bout during UFC 142 at HSBC Arena on January 14, 2012 in Rio de Janeiro, Brazil. (Photo by Josh Hedges/Zuffa LLC/Zuffa LLC via Gett
KNOCKOUTS OF THE YEAR 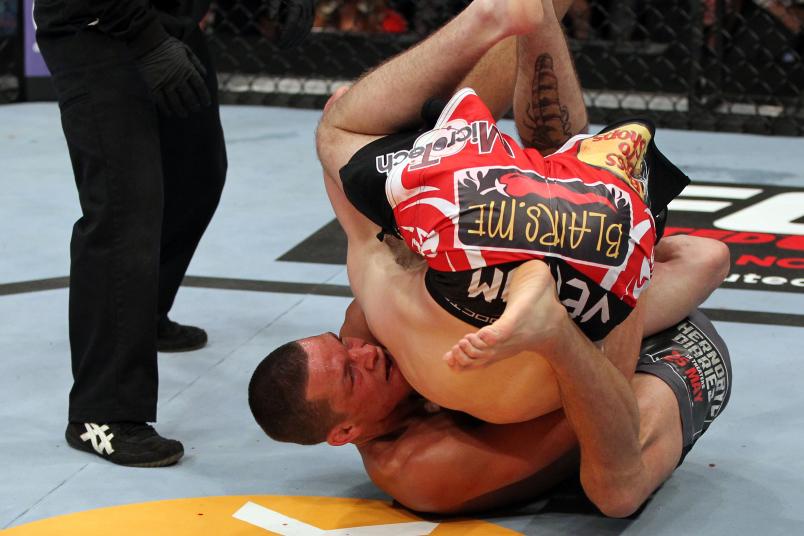 EAST RUTHERFORD, NJ - MAY 05: Nate Diaz Takes down Jim Miller during their Lightweight bout at Izod Center on May 5, 2012 in East Rutherford, New Jersey. (Photo by Josh Hedges/Zuffa LLC/Zuffa LLC via Getty Images)

EAST RUTHERFORD, NJ - MAY 05: Nate Diaz Takes down Jim Miller during their Lightweight bout at Izod Center on May 5, 2012 in East Rutherford, New Jersey. (Photo by Josh Hedges/Zuffa LLC/Zuffa LLC via Getty Images)
SUBMISSIONS OF THE YEAR