Look back at the year that kicked off a historic decade in the UFC
By Thomas Gerbasi, on Twitter: @TGerbasi • Dec. 22, 2019

In the first year of Zuffa’s ownership of the UFC, the promotion presented fight fans with five events. Nine years later, 2010 would see 24 events, an average of two per month, proving that the company wasn’t just meeting worldwide demand, but that it was running like a well-oiled machine. Seven international events would take place, with Australia and Abu Dhabi being added to the worldwide mix that already included Europe and Canada.

At last, mixed martial arts was a worldwide phenomenon, and the fighters of the UFC weren’t just based in the United States, but around the world, with its champions hailing from the U.S., Brazil and Canada.

Those champions that began the year – Brock Lesnar, Lyoto Machida, Anderson Silva, Georges St-Pierre and BJ Penn – would be pushed to the limit in the next 12 months, and some would not head into 2011 with those belts intact.

2010 started off relatively slow in terms of high-profile championship matchups, with UFC 108 featuring a win by former titleholder Rashad Evans over Thiago Silva, UFC 109 headlined by Randy Couture’s victory over fellow Hall of Famer Mark Coleman, and the promotion’s first visit to Australia for UFC 110 starred Cain Velasquez, who scored the biggest win of his career over “Minotauro” Nogueira.

At UFC 111 in Newark, New Jersey on March 27, the championship drought ended though, as St-Pierre successfully defended his welterweight title with a decision win over gutsy challenger Dan Hardy, and Shane Carwin won the interim UFC heavyweight title created by the bout with diverticulitis that sidelined Lesnar by stopping Frank Mir.

Later that month, lightweight contender Kenny Florian looked like a southpaw Larry Holmes as he peppered former PRIDE star Takanori Gomi with jab after jab for two rounds. But in the third, Florian took the fight to the mat and finished it there, spoiling Gomi’s long-awaited UFC debut via submission in a UFC Fight Night bout in Charlotte, North Carolina. 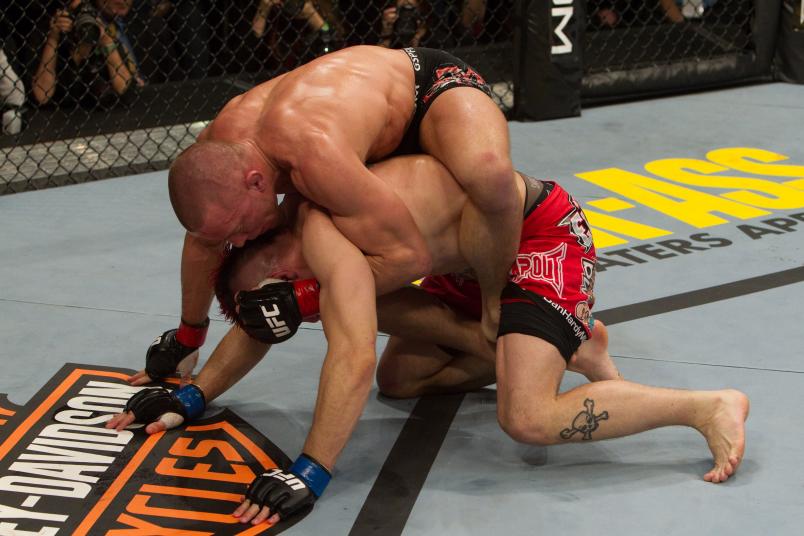 Yas Island in Abu Dhabi was the next international stop for the UFC juggernaut, and it was an event to remember on April 10, in some ways for the right reasons, and in others the wrong ones. On the positive side of the ledger, fans got to see a thrilling five-round title fight, as heavy underdog Frankie Edgar used a solid standup attack to score a five round unanimous decision victory over BJ Penn to win the UFC lightweight championship.

That was the good part. In the not so good part, UFC middleweight champion Anderson Silva’s return to the Octagon after an eight-month absence wasn’t as explosive as his previous battle with Forrest Griffin.

And though he retained his belt with a five round unanimous decision victory over Demian Maia in the UFC 112 main event at Yas Island in Abu Dhabi, it was a bout filled with more stalemates than submissions, and more posing than punching, forcing Silva to apologize more than celebrate after the final bell sounded.

“Demian actually surprised me with some of his punches,” said Silva. “I apologize to everybody; I don’t know what got into me. I wasn’t as humble as I should have been. It was just the ring rust and a little bit of everything. I can guarantee that next time it won’t happen."

UFC President Dana White was furious with Silva’s performance and wasn’t shy about letting the world know. One of those listening was a middleweight contender from West Linn, Oregon named Chael Sonnen.

After the Silva debacle at UFC 112, the UFC hoped that there would be no controversy in the May 8 rematch between Machida and challenger “Shogun” Rua like there was in their first fight. There wasn’t, as Rua became the UFC light heavyweight champion of the world after a stunning first round knockout of the previously unbeaten Machida in the main event of UFC 113 in Montreal.

The decisive finish of Rua-Machida II brought positive vibes back to the organization, and it was perfect timing for the UFC 114 headliner between “Rampage” Jackson and Rashad Evans. And though at times the long-awaited grudge match between the former light heavyweight champions looked like the calm after the storm of trash talk and bad blood, an action-packed third round and a solidly executed game plan from Evans remained in the minds of fight fans as he pounded out a unanimous decision win over his rival.

The focus remained on the 205-pounders in June, as UFC 115 featured an all-star matchup between former world champions Chuck Liddell and Rich Franklin. For “The Iceman,” it was a last stand, as Franklin scored his most important victory since he took the middleweight title in 2005, knocking out the returning Hall of Famer in devastating fashion in the first round. Remarkably, Franklin scored the knockout while fighting with a broken arm. 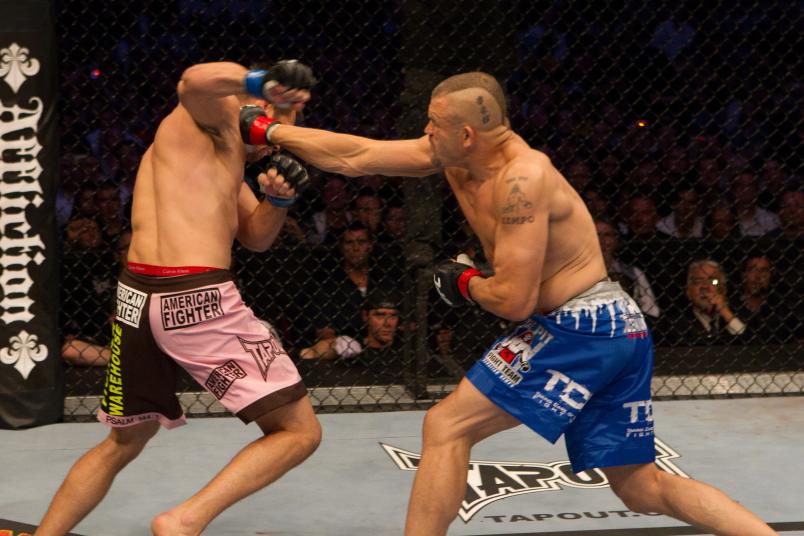 “I broke my hand before and didn’t quit,” Franklin said with a smile after the bout. The injury occurred earlier in the first round due to a Liddell kick, but Franklin not only soldiered on, he knocked out one of the sport’s most feared strikers in a bittersweet victory for fans of Liddell, who saw the 40-year old light heavyweight legend lose his third straight fight by knockout.

A somber mood hovered over the fight world after Liddell’s final bout, but the show must go on, and after the TUF 11 Finale card saw Court McGee crowned as the series’ latest winner, a ray of light showed up in the form of UFC 116 on July 3 in Las Vegas. Without exaggeration, when it came to action fights and high drama, it may have been the greatest card in UFC history.

For a few minutes in the first round of the UFC 116 main event, it looked like the heavy hands of Carwin were going to forcibly remove the UFC heavyweight title from the grasp of Lesnar. But with an amazing show of heart and resilience, and a chin of steel, Lesnar survived the first round and then closed the show in the second with a submission victory that kept the belt around the waist of the Minnesotan.

“This isn’t about me tonight,” said Lesnar, who was forced to the sidelines for nearly a year due to his bout with diverticulitis. “This is about my family, my doctors, all my training partners and staff. I am blessed by God. I stand before you a humble champion, but I’m still the toughest SOB around.”

There were a few on the undercard as well.

In the co-main event, it was the conclusion to one of the most amazing stretches in UFC history, and middleweight Chris Leben pulled it off, winning his second fight in two weeks by taking an action-packed war against Japanese contender Yoshihiro Akiyama via third round submission. Leben, The Ultimate Fighter season one alumnus who replaced the injured Wanderlei Silva in the UFC 116 bout, was coming off a knockout victory over Aaron Simpson on June 19, 2010.

And after three straight losses, including a defeat against the man facing him at UFC 116, Krzysztof Soszynski, light heavyweight Stephan Bonnar needed a win in the worst way, but he didn’t just get the victory against “The Polish Experiment,” he and his opponent engaged in an instant classic that saw the Las Vegan emerge victorious via a second round TKO.

It was a night to remember. But it wouldn’t take long to see another one. 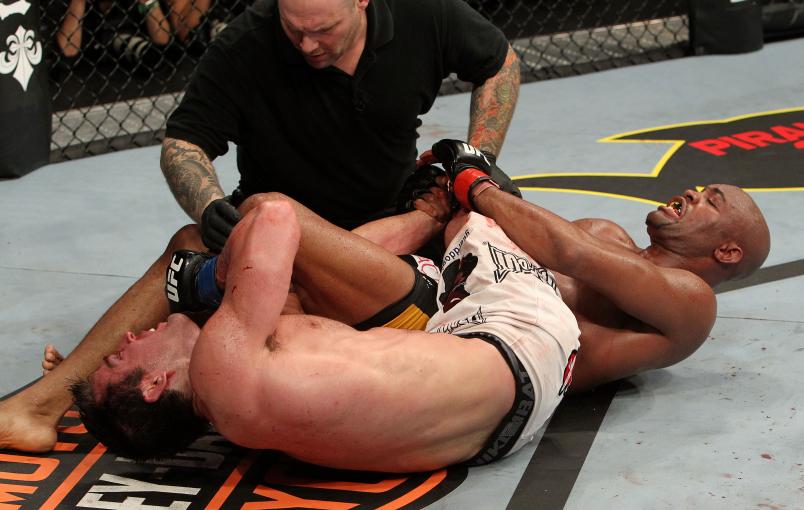 In fact, it was just a month later on August 7 in Oakland, California. On that night, Chael Sonnen promised that he would give UFC middleweight champion Anderson Silva a fight in their UFC 117 main event and he lived up to his word as he dominated the first four rounds of their bout. But in the fifth, it was Silva pulling off an incredible triangle choke that allowed him to retain his title and get the last word on the challenger.

“I knew that I was losing the first four rounds,” said Silva, who made the seventh successful defense of his title. “Chael put on a helluva fight tonight.”

“It was a tough fight, he’s a tough guy - I came in second,” said Sonnen, whose pre-fight trash talk reached epic proportions and also made this one of the most highly-anticipated bouts of the year. And one that lived up to its billing.

It was one of those rare times when there were no losers, and in which a star was born in Sonnen. Another young man whose star was rising was Edgar, and the newly minted lightweight champion repeated his win over BJ Penn on August 28 in Boston, this time even more decisively.

That UFC 118 card also featured the first UFC bout between a world-class boxer and an equally proficient mixed martial artist, and it went as most expected, as Couture impressively sent three-division world champ James “Lights Out” Toney to defeat via submission in the first round.

After events in Austin, Indianapolis and London, it was Brock Lesnar time again for UFC 121 in Anaheim on October 23, but this time, the big man wouldn’t have any miracle comebacks. Cain Velasquez - despite giving up more than 20 pounds to the champ - held off an initial charge from the 6-3, 265 pounder to take the Minnesotan down, knock him down, and then finish him off in the first round to win the UFC heavyweight championship. In the process, he became the first fighter of Mexican descent to earn a major heavyweight title in combat sports.

The UFC’s next two numbered events, UFC 122 in Oberhausen, Germany and UFC 123 in Auburn Hills, Michigan, were fairly uneventful, with Yushin Okami decisioning Nate Marquardt and “Rampage” Jackson scoring a controversial decision win over Lyoto Machida, and the TUF 12 Finale on December 4 lacked any significant drama as Jonathan Brookins earned the series title.

But to close out the year, the Octagon was back in Montreal on December 11 and its favorite son, Georges St-Pierre was still in dominant form, as he repeated his victory over number one contender Josh Koscheck, this time by way of a shutout five-round unanimous decision in the main event of UFC 124.

Of the five champions that began the year, only Silva and St-Pierre remained on top. 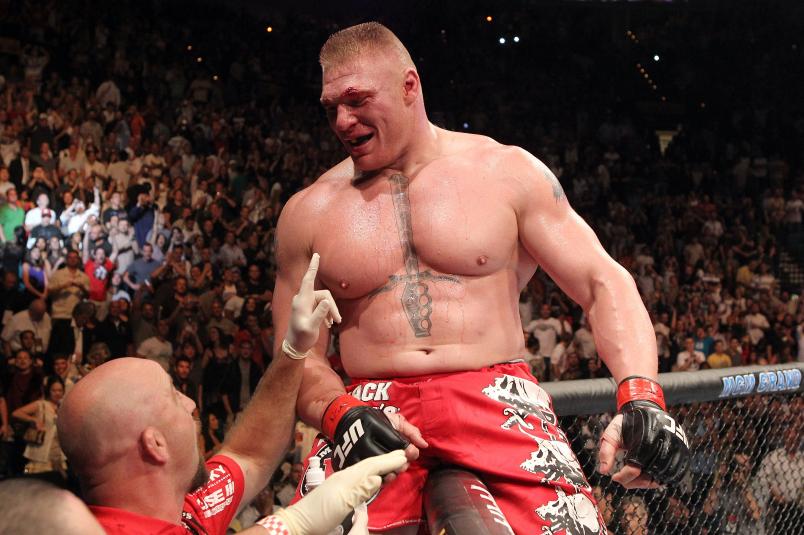 LAS VEGAS - JULY 03: Brock Lesnar reacts after his second round submission victory against Shane Carwin to win the UFC Heavyweight Championship Unification bout at the MGM Grand Garden Arena on July 3, 2010 in Las Vegas, Nevada. (Photo by Josh Hedges/Zuff
FIGHTS OF THE YEAR 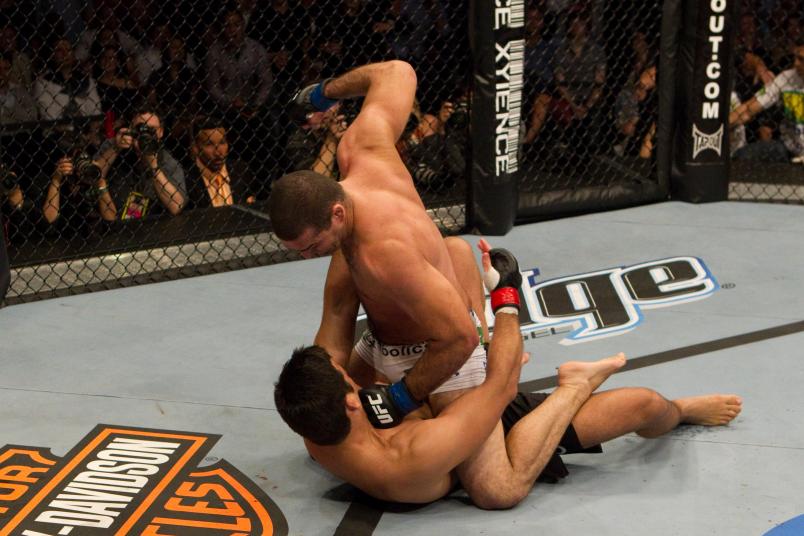 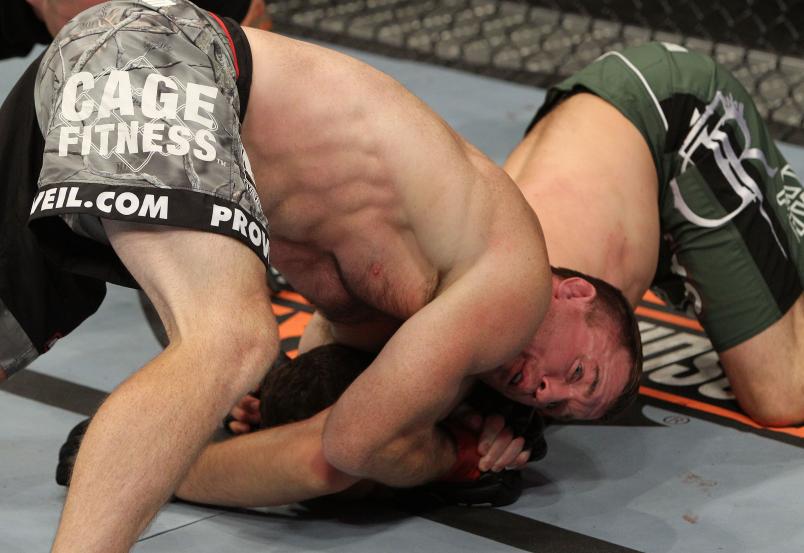