"Win or lose or draw. I'm going to give it my all to swing as hard as I can." - Lavar Johnson 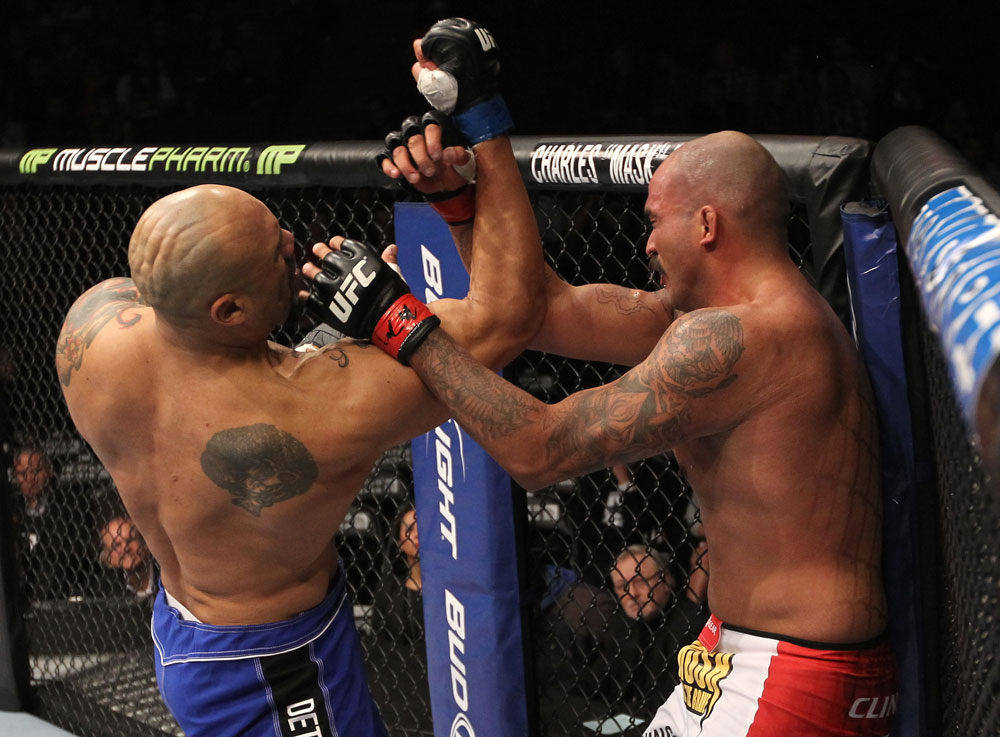 Death, taxes, and if you trade punches with Lavar Johnson - he will knock you out.

In the UFC, there are a few givens fight fans and would-be opponents should have accepted by now as failing ventures, like exhausting Frankie Edgar or choking out Jon Fitch or someone ever beating Anderson Silva. In 2012, we all learned that if you’re staring across the Octagon at Johnson then your gameplan better be takedowns and submissions, because striking with him is futile. Whether one has a granite chin, K-1 experience, or is 7 feet tall, everyone’s best and possibly only chance against the knockout-ready hands of Johnson is definitely on the ground.

There’s no secret to fighting the Californian; it’s either take it to the floor or he’ll put you through it.

“I hit really hard,” reveals Johnson. “I've been told by my teammates and everyone that it is a lot harder than everyone else. They hold the mitts for the other guys and then they hold the mitts for me and it's like a big difference. I really believe in my hands. And I'm getting faster. I don't know how it is happening, but I am getting faster. I guess it's all the pad work and the wrestling that is improving my standup. I feel good. I feel like I can compete with anybody in the UFC.”

Last January at UFC on FOX, it was Johnson’s fists that did the unthinkable and knocked out the seemingly un-knockout-able Joey Beltran. Not only did he knock Beltran out, but he did it in the first round. Previously, Octagon enthusiasts had seen “The Mexicutioner” nearly devour heavy leather thrown at him by Matt Mitrione, Pat Barry, Aaron Rosa, and Stipe Miocic. Even after the bludgeoning by Johnson, Beltran stood toe-to-toe with James Te Huna for all three rounds, and Te Huna is a proven KO artist, earning seven of his last nine wins by knockout.

“Some people are just born to hit hard, and that's my talent,” estimates Johnson. “I think it's just natural for me. I'm not big on the jiu-jitsu, as we all know. I'm trying to pick it up and have been working with some good guys. It just comes natural to me to hit hard.”

The Beltran bout netted him his first Knockout of the Night bonus, and Johnson secured his second in his second Octagon appearance against Barry in May at UFC on FOX. Two fights, two first round finishes, two KOTN awards, and he was quickly enjoying life in the UFC. Johnson’s next move was a surprising one, accepting a short notice scrap with Stefan Struve at UFC 146.

The 35-year-old from Madera signed up for a showdown with the Dutch “Skyscraper” Struve only 21 days removed from the win over Barry. As he looks at really any fight on paper, he thought he could put his 6’4” frame with his 81 inch reach to work on Struve, whose three losses inside the Octagon all come by way of one punch knockout. In theory, it wasn’t that bad of an idea, but the 7 footer is quickly becoming one of the craftier submission artists in the UFC heavyweight division, and Struve caught Johnson in something special.

“I thought I was going to be able to knock him out, honestly,” he said. “That's why I took the fight on such short notice. I thought I was prepared. He had a really good game plan. I didn't have the chance to wrestle or roll or get anything ready. But he fought a good fight and outsmarted me, I guess you could say.”

It only lasted a minute, but the fight went exactly as it had to go for Struve to win. The action began with Johnson crossing the cage and belting Struve to the face and body, which noticeably caused damage. And with that, “Skyscraper” jumped guard and transitioned into an armbar before Johnson even touched the floor. That’s how it had to go down or Struve would’ve been put down by another series of Johnson’s punches.

After his first year in the UFC, Johnson is 2-1 inside the Octagon with two bonus checks in the bank. To think, Johnson began his foray into combat sports with a Toughman Competition in neighboring Lemoore, California to tell his kids and his grandkids that he did it once. Nowadays, he has an impressive scrapbook of stories, like how he put a former kickboxer to sleep on network television and how he became a featured heavyweight fighter on Pay-Per-View. The surreal experience is far from lost on Johnson, who had more than a few butterflies in his stomach before these three UFC fights, but still knuckled-up when it was showtime.

“It was amazing; life changing,” tells Johnson. “It's everything that we train for as professional fighters. Everyone wants to be in the UFC, that's the main goal. I was just so blessed to be there to fight and compete with these guys. A lot of people know who I am now. The only fights I've thrown up before were my last three in the UFC (laughs). It's a little different, for sure. You know that the world is watching. It's just the UFC, period. You knowing that you're at the Super Bowl. I think I'm going to be all right now. I don't get scared, I'm just getting comfortable. I feel really good for this one. After the first punch is thrown, I'm good. All that nervousness goes out the window after that first punch is thrown and it's on.”

Up next for Johnson is a chance to answer his first call out in the UFC from The Ultimate Fighter 10 finalist Brendan Schaub at UFC 157 in Anaheim. At 9-3 with eight wins by knockout, the former collegiate and professional football player brings both size and speed with solid Golden Gloves-winning boxing technique. Schaub’s best Octagon appearance was his Knockout of the Night awarded performance against former K-1 and PRIDE superstar Mirko “Cro Cop” at UFC 128. If Schaub is in need of any advice on fight strategy, Johnson is graciously happy to help: “take me down”.

“I think Brendan is very athletic,” says Johnson. “He's got good cardio, well-rounded, I've heard he's pretty decent on the ground, and he likes to stand up and bang. I'm expecting him to come out and try to stand up and bang a little at least. But I think he's going to try and take it to the ground from there once he feels the power. I think he got his brown belt not too long ago, so, most definitely if I was him, I would use that. He's fast, so I would use my speed, use my hands to try and get in and shoot and try and take me down.”

While call outs are commonplace in the UFC, it is a tad shocking that Schaub would choose Johnson in particular. The glaring weakness in Schaub’s overall game is his chin and he has lost three times - Nelson, Antonio Rodrigo Nogueira, Ben Rothwell - inside the Octagon all by a devastating fist going upside his heavyweight head. The Nogueira and Rothwell losses were Schaub’s last two fights, and, now, he specifically wants to try the even more powerful Johnson. It doesn’t make sense to Johnson, but he’s not complaining, and he is ready to put Schaub on the wrong end of his fourth KOTN bonus.

“If he even makes it to then [a takedown attempt],” asserts Johnson. “I've seen him get hit by ‘Big Ben’ with a slapping left hook and that knocked him out. ‘Big Country’ clubbed him on the side of the head and knocked his lights out. And, ‘Big Nog’ knocked his lights out too. I think I hit harder than those guys. We'll see what happens. Most of my finishes are by knockout and most of his losses are by knockout. The odds are going in my favor, but it doesn't always work that way. The best fighter doesn't always win in MMA. It's a tricky sport. Who knows, maybe he'll bring his chin that day and end up sleeping me. You never know. That's why we have these fights. It is what it is and he's going to get what he wants on the 23rd.”

In preparation for Schaub, Johnson is busy training with the top tier talent of American Kickboxing Academy in San Jose, California. Under the watchful eye of “Crazy” Bob Cook, who has cornered Johnson since the very beginning, he is steadily working on his MMA game against the best heavyweights one could find in former US Olympic wrestler turned Strikeforce heavyweight Grand Prix winner Daniel Cormier and UFC heavyweight champion Cain Velasquez. As everyone, including himself, often point out Johnson’s lack of jiu-jitsu expertise, “Big” does have one legit submission win via guillotine choke, so opponents do need to worry about the occasional sub when going for that necessary takedown.

“He was a really big guy, he went in there standing up, and the power was too much for him right away when I put hands on him,” remembers Johnson. “He didn't like it one bit, so he tried to shoot and I caught him in a guillotine. But he actually picked me up and tried to bump me over to the side of the cage and tried to throw me out of there. He tried to throw me out of the cage (laughs). The referee stopped that. He brought us back to the middle in the same position and I just cranked the guillotine on him. He was looking for a way out. He knew I was too much for him.”

This Saturday in Anaheim, heavyweights Johnson and Schaub will collide, and come hell or high water, “Big” will be gunning for the knockout. “People want to see the heavyweights swing for the fences and that's what I'm going to give them,” affirms Johnson, with 16 of his 17 wins coming by punishing punches, proving a striker’s duel with Johnson is guaranteed both bad for an opponent’s health and exciting to watch for fight fans. “I'm trying to come out and give them the best show that they can have. Win or lose or draw. I'm going to give it my all to swing as hard as I can.”