de Randamie: "All you have to do is believe"

Two decades ago, a 15-year-old Germaine de Randamie would make the walk for her first professional rules kickboxing bout.  She won. In fact, Germaine would make a habit of winning, extending her tally of victories to 46 without defeat while earning ten world titles in three different weight classes from seven different organisations. Oh, and she also knocked out a significantly heavier man in a boxing match.

2019 is, therefore, a benchmark year for Germaine, who has now been prize fighting for 20 years, but it has been in the last few years that she has faced her biggest challenges in life, and not just in the realm of combat.

I recently visited Germaine to produce a feature for the UFC.  It was the second time I had traveled across to Utrecht in the Netherlands; the first was just before she competed for the UFC featherweight title against Holly Holm.  My initial time with Germaine was very memorable.  Here was this tall, slender woman who wore a full-time smile and could not be more hospitable.  She exudes positive energy and that translates into her training. Never in all my years of visiting gyms and calling fights had I witnessed such masterful striking.  If you remove the martial from the arts, Germaine’s work draws parallels to that of Rembrandt; visually beautiful, captivating and innovative.  She effortlessly connects her upper and lower body in fluid motion to unleash attacks with such precision and efficiency that you see very quickly how she has a kickboxing record that few can rival.

But beneath the pugilistic excellence exists a very compassionate and loving daughter, one who told me during my first visit that part of her motivation for capturing the UFC title was to take care of her mother financially.  She is also a person who enjoys working to make the world a safer place by dedicating herself to the police force. 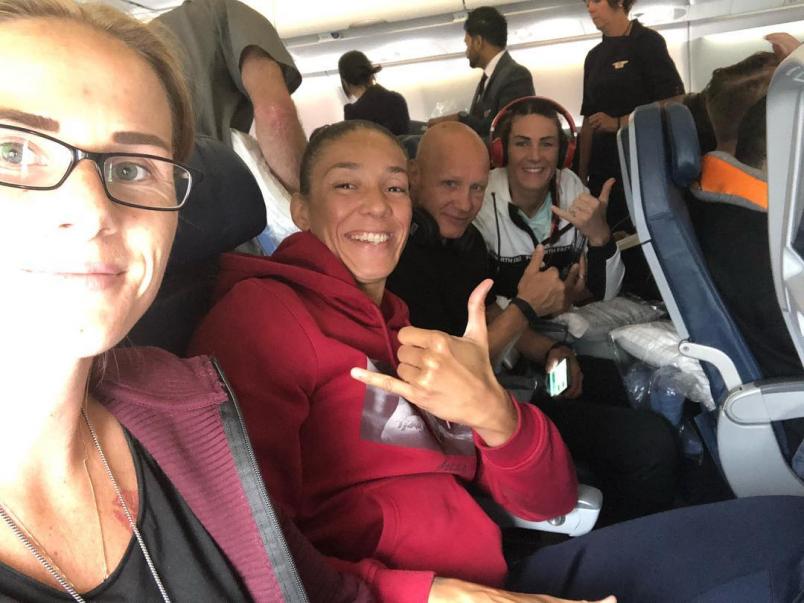 Much had changed since my first visit and Germaine had found herself being chewed on by the sharp teeth of fight fans following a controversial title win over Holm, and also for refusing to defend her belt against Cris Cyborg.  Needless to say, I returned to Utrecht with much anticipation to see how things had changed for the former UFC champion.

My trip began by watching Germaine train with famed striking coach, Said Badaoui.  In recent times my attention has been taken by jiu jitsu tutorials and wrestling study, but once student and coach started their work on the mats at SB Gym, I was transported back to where my love affair for fighting began – striking.  I almost forgot that I was sent to film sequences and ask thought-provoking questions as I fell into a transfixed state watching Germaine react to Said’s commands by angling her artillery to crash the pads, which resulted in a symphony of cracks and booms.  Conversations followed and that’s where I discovered the disturbing details surrounding what should have been the most significant and joyful achievement in an MMA fighter’s career.

Whilst sat on Germaine’s couch next to her girlfriend Samantha and their handsome American bully, Gerrit, I glanced around the walls of their home, being immediately drawn to the shiny gold UFC belt that sat on a high shelf in the middle of the sitting room wall, flanked by her title fight kit and signed poster. I pressed Germaine about the significance of this wall.

“The wall reminds me of a dark place, but also of a proud place.  Sometimes in life bad things happen, but they turn out to be the best in life to happen.  A lot of negativity came from this fight (against Holm). I’ve been to hell and back after this fight and if you ask me at this point when was the most horrible time of your life, it was when I was the UFC champion. It was a short time period, but at the same time I have learned so much about myself. I’ve learned so much about people around me and that I’m so thankful everything has happened so that I can look at it with a big smile and know where I’m at right now.  And I’m so much stronger.  It was an amazing lesson.” 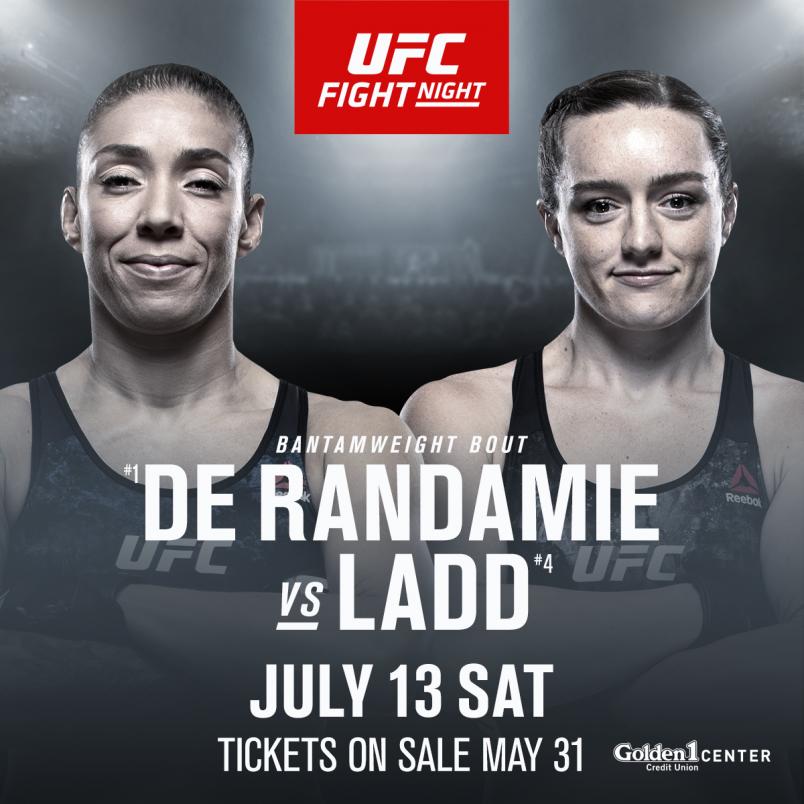 Germaine captured the inaugural women’s featherweight title at UFC 208, but it wasn’t without controversy. At the end of the second and third rounds, she landed punches after the bell had sounded. Holm, who had stopped fighting, was visibly hurt by one of the strikes in particular; however, the referee did not take a point on either occasion.  The fight went to the judges and Germaine took it by unanimous decision, a verdict which was challenged by some corners of the MMA media. The backlash continued for the ensuing few months and was then compounded after Germaine refused to fight Cyborg for the 145-pound title.

“I think that I won (the title fight) fairly no matter what people say.  In the fight with Holly I hit her after the bell.  I didn’t do that on purpose. Everybody thinks or say I did it on purpose and that I’m a dirty fighter. I’ve been fighting professionally for 20 years. I never had a foul in my whole career. I’ve fought a man, I have close to 60 pro fights, I’ve never made any faults in my career.  Why would I put myself at risk of being disqualified in a UFC title fight? But anyhow, it happened - my bad.

As a member of the MMA community, I had noticed the heat that turned up on Germaine following those unfortunate events, but I was sickened to hear the gory details.  However, I was relieved to learn that Germaine had emerged from those dismal moments and had found new motivation from these dark days. 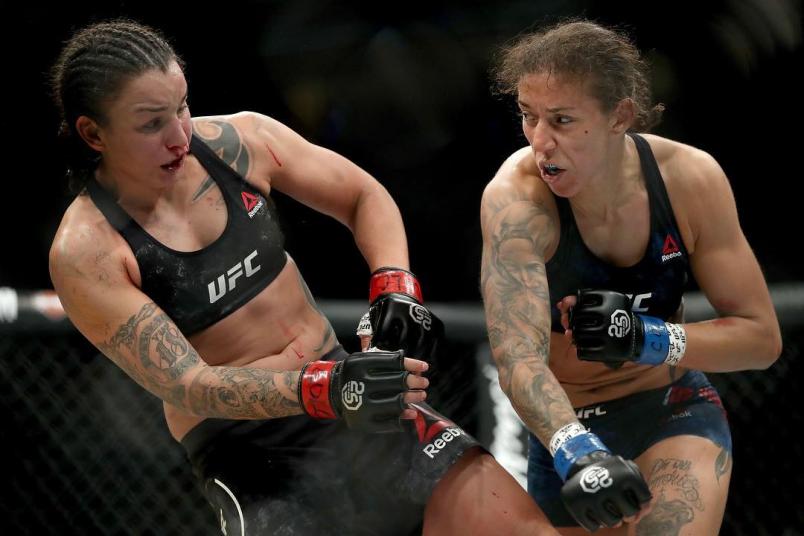 Catch GDR vs Ladd this Saturday on ESPN+

Last year, Germaine would face another terror, but this time it was not delivered via an anonymous hater, but by a medical professional.  She would learn that she wasn’t going to be able to fight any longer.  It was a devastating blow to a woman that is a fighter at heart, someone who sleeps and breathes fighting and lives by the bushido code of integrity, honor, respect and discipline.

“The doctors told me ‘you will never fight again,’” she recalled. “I cried like a little girl for maybe a week. Is this the end?  After everything I have been through: being stripped of the title, all the negativity surrounding my fight with Holly, I’m like, ‘Is this seriously how it’s going to end?  Is this it?’ And then I looked at Samantha and I looked at my mum and said, ‘I’m done crying. Watch me, I’m gonna come back’. And again, I did it.  I told the doctors, ‘I decide when I stop, I decide when it’s enough.’”

Mercifully, for Germaine and her fans, the show went on and she was medically cleared to fight former UFC title challenger Raquel Pennington in Denver last November.  Despite being absent from competition for 21 months, the former UFC champion shut down the gritty wrestling game of Pennington and at times pieced her apart with her well-versed striking.  The victory was a sweet one, but not perhaps for the reasons one would imagine.

“It was a rollercoaster of emotions because I was enjoying being back in that cage. I was enjoying it so much that I forgot I was in a fight and was facing someone that wants to rip my head off and you should have tried to rip her head off.  But I was enjoying being there so much that the fight went the way it went.  Afterwards I realized I did it again - I beat all the odds again.  There’s a lot of people that only see the UFC show. They see us walking out the tunnel, but backstage, when the curtains are closed, that’s where everything happens. That’s where all the build-up comes from.

“Nothing can stop me if I don’t allow it to.  The most important feeling for me was that I took control over everything.  I came back and it felt so good.  At times I doubted whether I was able to come back.  There were moments I asked myself, ‘Why do I do this?  Why do I take this?’  A lot of things have been said, a lot of other things have destroyed the legacy I have created for myself because people focused on the negativity instead of looking at the solution.  But at the same time, I wanted to prove to myself that I have still got it, that I was still strong enough to face any obstacle they have put in front of me.  It was a battle between me and me.  I had to enjoy this ride again and I did, one hundred percent.”

It is very encouraging to learn of stories where people have overcome adversity to prevail, but Germaine’s job is not yet done.  She isn’t about to spout strong words of title ambitions, but she would like to share her love for fighting with those that are willing to watch, and without question we should.  Thankfully, the wait is short as Germaine faces a new breed of MMA fighter who is at the opposite end of her fighting career - Aspen Ladd.  I touted Ladd as a real threat to the top of the division after I witnessed her dismantle Lina Lansberg in Poland under two years ago.  There is venom in her intentions once the Octagon door closes and you hear it as Aspen forces out a war cry whilst she delivers vicious ground-and-pound blows.   She is a fresh challenge for Germaine, who is hungry to entertain.

“Let’s bang it out, let’s have some fun, girl, let’s do this.  I’m a fighter, but I’m an entertainer, too. A lot of people spend a lot of money to see us fight, so let’s make it a fight.  I believe she’s a great athlete and she going to bring a great fight to me.  We’re going to make one hell of a fight.”

Aside from Germaine reveling in the thought of engaging in a brawling battle with Aspen, she has an overriding desire to share her love for martial arts and to also stand as a role model to those who don’t share the platform that he does and show first-hand that you can do anything you set your mind to.

“The only thing I care about in life is to bring joy to people.  And what hurt me also in the dark period is that I have never wanted to create hate. Never.  That’s not my intention when I fight. I fight solely because I like it.  I have a full-time job.  I am so busy with life. I make 11-hour shifts a day, five-six days a week. I do this because I really love it. It’s all about being an influencer, changing people minds, making people believe that no matter what, if you believe in something, anything is possible.”