This Day in UFC History

January 8, 1999. The UFC’s “Dark Ages” were approaching and the promotion’s future was in limbo. That didn’t stop those involved from putting on events and bringing in the type of talent that would keep it afloat, but the walls were closing in from politicians looking to ban the sport and television execs unwilling to give it the support it needed to get to the fans that wanted to see it.

Little did anyone know that in two years, Lorenzo Fertitta, Frank Fertitta and Dana White would purchase the UFC as Zuffa, LLC and resurrect the brand and the sport. But for now, the UFC was running a seven-fight card at the Pontchartrain Center in New Orleans, hoping to build excitement with the continuation of a tournament to crown a new heavyweight champion.

“There were times when I had my doubts, considering the way it was attacked by politicians and the athletic commissions, but I think everybody did their best to keep the faith, and things worked out,” said Pat Miletich, who defended his lightweight (soon to be re-branded welterweight) title against Jorge Patino.

Here’s how UFC 18 went down that night…

With the UFC heavyweight division thrown into disarray with the vacating of the title by champion Randy Couture, the hunt was on for a new star to rise to the top and claim the belt.  That star may have been found in the form of Holland’s Bas Rutten, who made his Octagon debut after a long career in Japan’s Pancrase organization with a hard-fought TKO win of Tsuyoshi Kosaka in the main event of UFC 18 at the Pontchartrain Center in New Orleans.

Rutten showed off some impressive takedown defense initially as he peppered Kosaka with strikes before finally getting brought to the mat. Rutten had some success getting back to his feet, but Kosaka was relentless about putting him on the canvas again. Nearing the six minute mark, referee John McCarthy stood the fighters, and Rutten got off some shots before the inevitable trip to the mat. After another standup, Rutten finished the regulation period strong, but he would need even more to pull ahead on the scorecards.

And he got it, as he battered the tiring Kosaka with strikes, eventually adding a knee to his arsenal that rocked the Japanese fighter. A series of straight punches finished the job, with McCarthy stopping the fight at the 14:15 mark.

“My corner said he’s not gonna shoot anymore, he’s gonna be too tired,” said Rutten, who scored wins over Maurice Smith, Frank Shamrock, and Guy Mezger in Japan. “So in this overtime I said give me the sign of one minute and I will explode on him. So that’s what I did.” 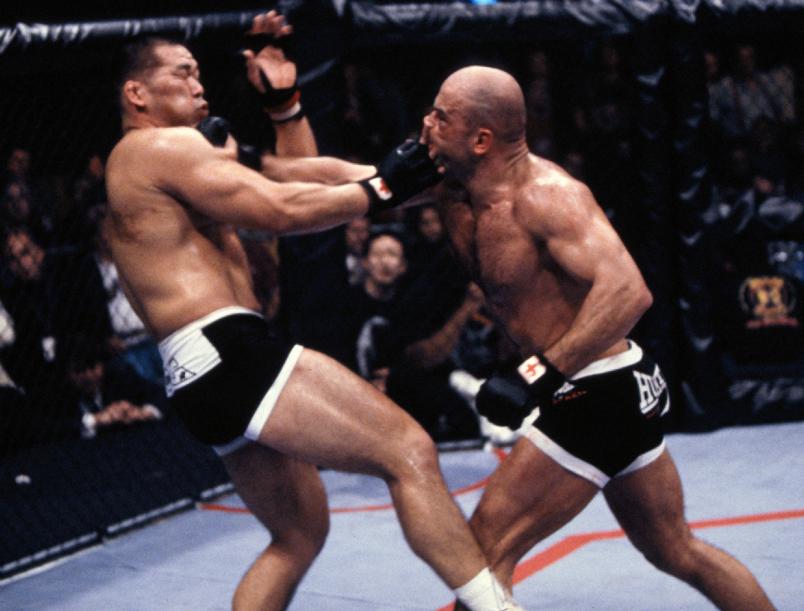 In the championship co-feature, UFC lightweight champion Pat Miletich continued to shut down all opposition, scoring a relatively uneventful unanimous decision over newcomer Jorge Patino in a 21 minute contest that, like the Miletich-Mikey Burnett title bout, didn’t sit too well with fans in attendance that were craving action. It does take two to fight though, and Patino didn’t exactly conduct himself like a fighter trying to win a world championship, and outside of a tight guillotine choke in overtime, Miletich was in little trouble as he waltzed to another victory. 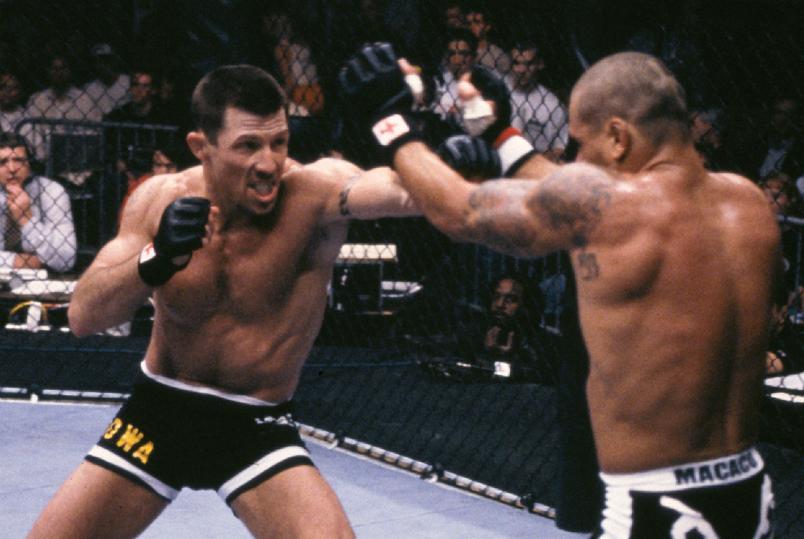 The slide of former heavyweight champion Mark Coleman continued, as rising star Pedro Rizzo moved closer to a shot at the belt with a split decision victory. The defeat was the third in a row for “The Hammer,” but this was one many viewers believed should have gone Coleman’s way.

Not surprisingly, Coleman was able to get the bout to the mat in the opening stages, and he kept Rizzo there effectively before a McCarthy restart. Looking winded already, Coleman was not forced to deal with his Achilles heel – his cardio – against a hard-hitting striker eager to make a name for himself. Rizzo began landing his devastating leg kicks, and Coleman was feeling the effects, but he was able to hit another takedown to catch a breather and score some more points before a final standup just before the end of regulation.

The overtime period was marked by Rizzo’s lack of aggression, even though he tagged Coleman almost at will, and it was apparently enough for the judges to award him the verdict.

Middleweight up and comer Tito Ortiz got a measure of revenge on Ken Shamrock’s Lion’s Den, using a well-rounded attack to dominate Jerry Bohlander before the bout was stopped in the overtime period due to a cut. Ortiz had lost a UFC 13 match to Guy Mezger via submission.

In other bouts, lightweight Laverne Clark defeated Frank Carraci via submission due to strikes, newcomer Evan Tanner submitted Darrel Gholar via rear naked choke, and Mikey Burnett bounced back from his disappointing loss to Miletich by decisioning Townsend Saunders. 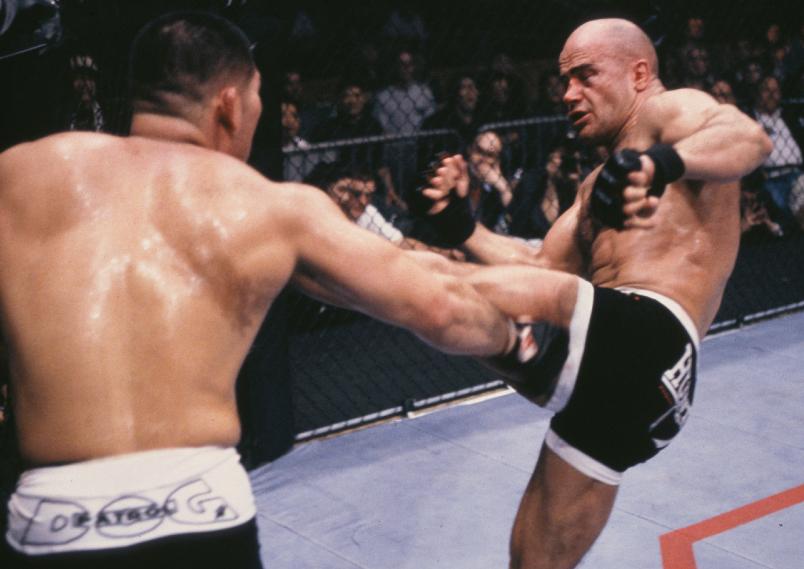 Look at that lineup for a second. On a card with just seven fights, four future UFC Hall of Famers (Miletich, Rutten, Ortiz, Coleman) all made the walk to the Octagon. Add in future middleweight champion Evan Tanner, and that was quite a night for the fans in attendance in New Orleans. It’s a reminder why diehard fans show up at UFC events for the first prelim bout to this day, because you never know what future star might be in action.

As for that night, Rutten lived up to the hype against the highly underrated Kosaka, an impressive feat given the quality of opponent and the fact that “El Guapo” didn’t exactly enter the Octagon at a hundred percent.

“I knew with Kosaka I was going to be in for something, and I had this crazy chest injury so I couldn’t really train my takedown defense and my ground. But once I started feeling him out and I could stop his takedowns, I knew I could pick my shots and go for the knockout.” 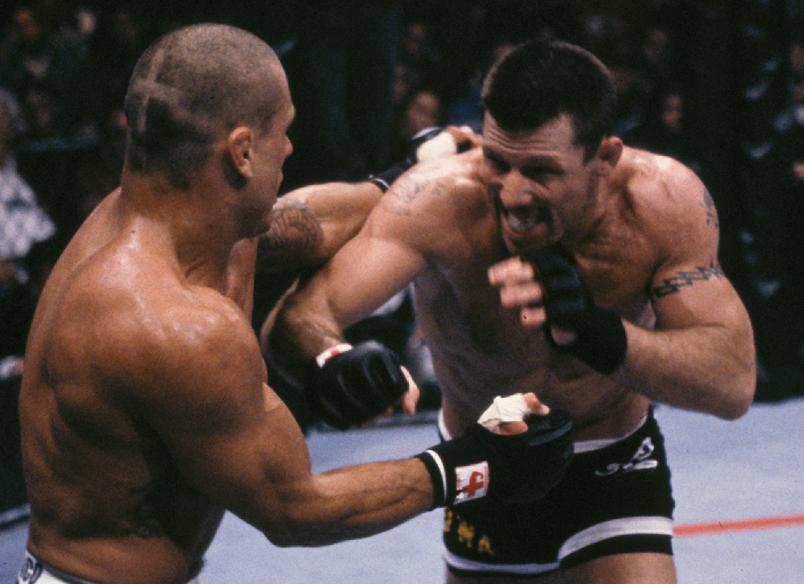 And while Miletich could have rested easy after defending his title for the first time less than three months after winning it, that wasn’t how the fight life was back then.

“I defended my title in the UFC (against Jorge Patino), then I fought a pro boxing match the next week, and the week after that I fought in Hawaii against Jutaro Nakao, a guy I didn’t even know of at the time. I was warming up for the fight, and I asked Frank Shamrock ‘how good is this Jutaro Nakao guy?’ He goes ‘you’re kidding right?’ ‘Dude, he’s the number one guy in Shooto right now.’ (Laughs) The fight was going great and I wasn’t having too many problems with him, but I was the guy that had to find out that he had an insane triangle choke.”

Two fights later, Miletich was back in the UFC, defending his title against another future coaching great in Nova Uniao’s Andre Pederneiras.