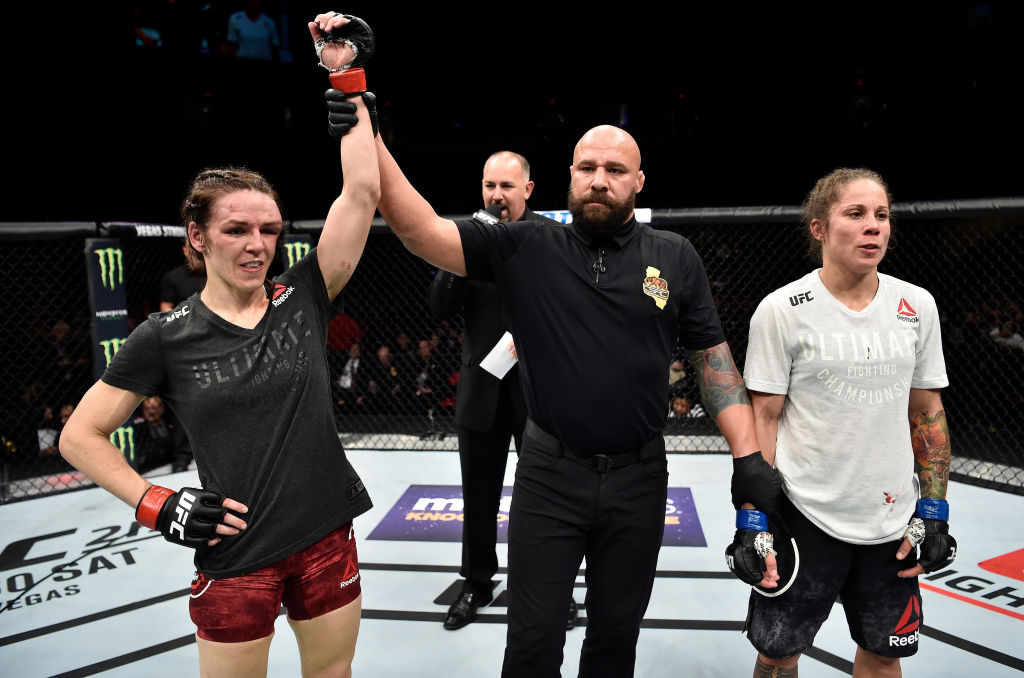 Alexis Davis made it two for two over Liz Carmouche in UFC Fight Night action at Save Mart Center in Fresno, taking a close split decision victory in the flyweight debut for both former 135-pound contenders.

Carmouche had success with her ground attack in the first frame, but late in the round, a takedown by the Californian was nearly a costly one when Davis locked in a tight armbar. Carmouche hung tough, though, with the horn sounding to give her another round to work with.

Davis used her striking to set up another visit to the mat early in round two, but this time it was the Canadian on top and in control. With 50 seconds left in the round, referee Frank Trigg restarted the action, and Carmouche finished strong with some strikes and a trip to the mat at the end of the frame.

A swelling over Davis’ left eye got progressively worse as round three got underway, and Carmouche took advantage with some hard punches before scoring a takedown. Davis nearly caught her opponent’s arm again, but Carmouche slammed her way out of trouble and retained control until the final 15 seconds, when Davis reversed position and fired off strikes until the fight’s conclusion.

After two split decision losses to kick off his UFC career, Andre Soukhamthath took the judges out of the equation in bout three, as he halted Luke Sanders in the second round of their bantamweight bout.

Sanders controlled the first round at distance and in the clinch, and he was keeping that pattern going in the second before a flush right hand by Soukhamthath changed everything. After scoring that knockdown, “The Asian Sensation” followed up with a series of unanswered strikes on the mat, with referee Josh Rosenthal stepping in to stop the fight at 1:06 of round two.

Soukhamthath, who stepped in on short notice for Bryan Caraway, improves to 12-5. Sanders falls to 11-2.

In a meeting of bantamweights, Lemoore’s Alex Perez made his home state fans happy with a second-round submission of the Philippines’ Carl Johns de Tomas

A graduate of Dana White’s Tuesday Night Contender Series, Perez showed off a slick grappling game in the opening round, threatening with submissions throughout, and in the second, he amped things up with a quick takedown followed by the D’Arce choke that produced the tap out at 1:54 of round two. 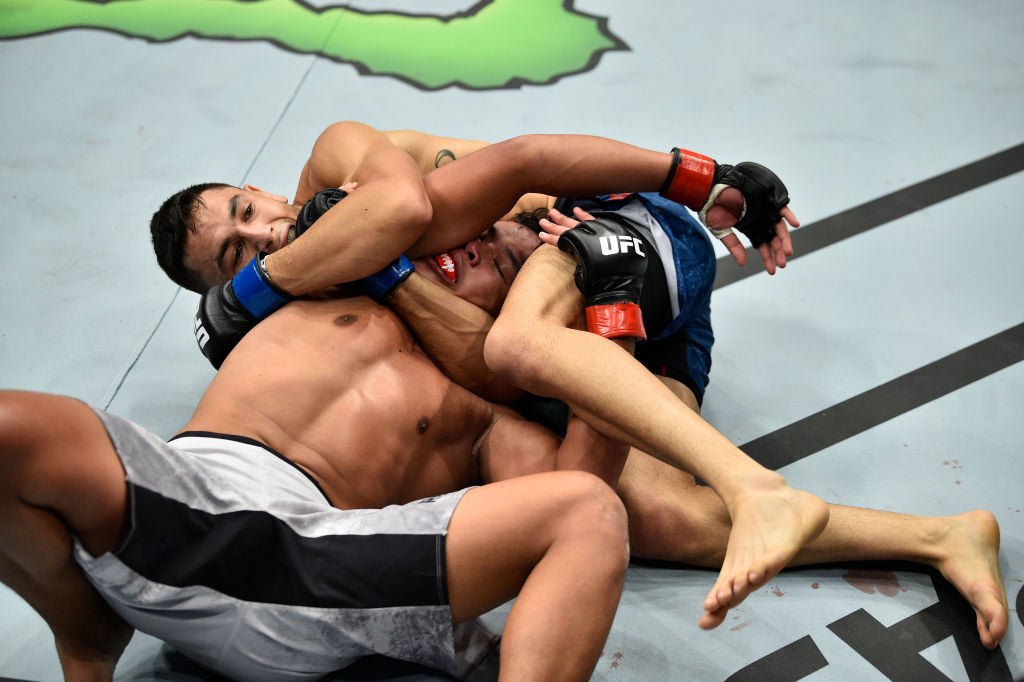 Dvalishvili had a solid first round, as he controlled the grappling exchanges and scored a pair of takedowns. Saenz got in a series of hard knees to the body, but it didn’t slow down the Georgia native, who kept the grappling hits coming in the second and third rounds. Saenz did stagger Dvalishvili with an uppercut in the closing minute, and those wins in the striking exchanges were enough for the Arizonan to pick up the win on the scorecards via tallies of 29-28 twice and 28-29.

The fight was a war of nerves more than anything, with neither combatant willing to push the pace. Each had brief moments of success, but there was no urgency to follow up, and while there was a late surge in the final minute, it wasn’t enough to make the crowd happy.

After a short-notice loss to Sergio Moraes at welterweight, Davi Ramos’ second trip to the Octagon came in his natural weight class at 155 pounds and it was quite a difference, as he submitted Chris Gruetzemacher in the third round.

Gruetzemacher (13-3) did a good job of keeping the fight on the feet in the first half of round one, but eventually, Ramos was able to get the action where he wanted it and he was able to keep the bout on the mat for over two minutes.

Ramos (7-2) scored a flash knockdown with a right hand early in the second, but soon the fight was back on the mat, with a subsequent stall bringing a restart by referee Mark Lawley. Ramos continued to have success on the feet, but Gruetzemacher got his shots in as well as Ramos began to tire. With 1:46 left, Ramos got a takedown, Gruetzemacher fighting his way to his feet almost as soon as he hit the deck, but the Brazilian pulled off another takedown before the horn sounded.

With the fight still up for grabs, Ramos made sure the judges wouldn’t get involved, as he took Gruetzemacher down and locked in a rear naked choke that forced a tap out 50 seconds into the third and final round.

Unbeaten middleweight up and comer Trevin Giles continued to impress in the opener, as he moved to 2-0 in the UFC with a third-round TKO of Antonio Braga Neto.

Giles got off to a good start with some crisp striking, but as soon as Neto was able to trip him to the mat with a little under three minutes left, the Brazilian ground ace kept him under control on the canvas for the rest of the frame.

Avoiding the mat in round two, Giles dominated behind a stiff left jab, bloodying Neto and keeping him at bay, with the occasional right hand jarring the returning vet as well.

Neto scored a takedown early in the third, but Giles got loose quickly and rose to his feet and the jab fest continued. This time, though, Giles added even more right hands, and when one put the Brazilian down, referee Frank Trigg had seen enough, halting the bout at 2:27 of round three.