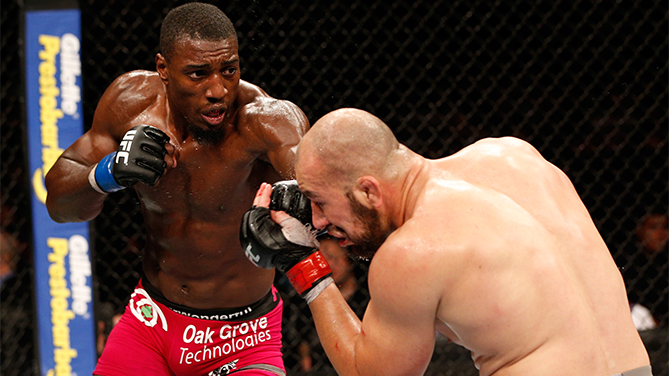 Scores were 30-27 on all three judges’ scorecards for Davis, who is now 5-0 with 1 NC against Brazilian opponents, leading “Mr. Wonderful” to call out former middleweight champion Anderson Silva after the bout.

Davis opened the bout with a takedown attempt that was effectively defended by Teixeira, but the former NCAA wrestling champ didn’t let it throw him for a loop, as he went to his stand-up and clinch game in response. Teixeira stalked, looking to land one of his bombs, but he wasn’t able to find the target. With two minutes left. Davis got Teixeira to the mat, firing punches with his right hand all the while. Teixeira got upright fairly quickly, but Davis kept him tied up before dragging the fight back to the canvas.

The second and third rounds played out like the first, with Davis dominating the action and Teixeira unable to get untracked. It wasn’t the most thrilling three-rounder, but in terms of having a solid game plan and implementing it, Davis was in top form, putting him back into the win column after a disappointing loss to Anthony Johnson in April. 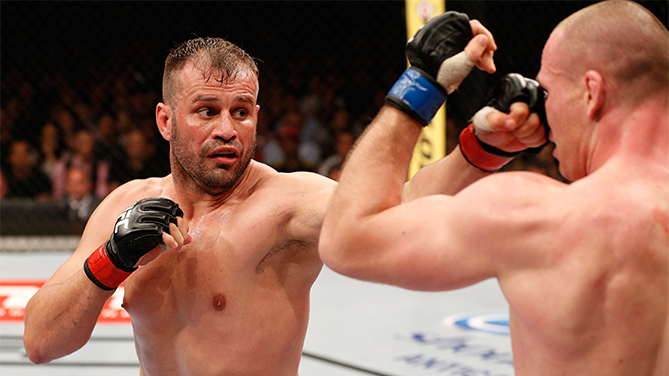 “Hillbilly Steel” was on full display in Rio Saturday night, as ever-resilient Brazilian Fabio Maldonado bounced back from a rough first round to stop the Netherlands’ Hans Stringer in the second round of their light heavyweight bout.

Stringer effectively avoided a stand-up war with the former pro boxer, taking Maldonado down as soon as the bout opened. Maldonado did his best to escape, finally getting upright with a little over a minute left in the round. Stringer took his blooded foe right back down though, keeping him on his back for the rest of the frame.

Clinching immediately to start round two, Stringer’s game plan was still working perfectly, as he gave Maldonado no room to operate. When they broke, Stringer showed off a crisp right hand, and in the second minute, it was back to the mat. After a scramble midway through the round, Maldonado got in the top position and was finally able to throw his punches to the body and head. Stringer showed no signs of fighting back, and after a warning from referee Marc Goddard, the fight was stopped moments later at the 4:06 mark, with a jubilant Maldonado joined by the legendary Anderson Silva in celebration after the bout. 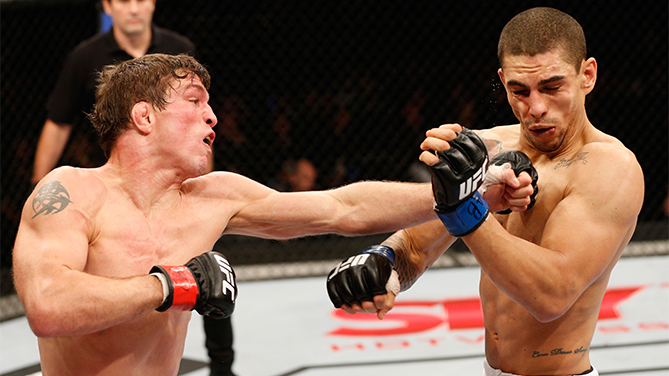 Darren Elkins was Darren Elkins in his featherweight bout against Lucas Martins, using his wrestling and clinch game to win a three-round split decision that was effective but not necessarily exciting.

Elkins took Martins to the mat within the first 30 seconds but the Brazilian rose quickly, cutting his opponent on the left cheek in the process. The Indiana native kept the pressure on as he continually looked for the takedown, but Martins’ defense was solid and his occasional strikes were effective in bruising up Elkins’ face.

Elkins’ mauling style continued to pay dividends in round two, but in the final two minutes, a head kick by Martins momentarily swung momentum back to the Brazilian’s side. It was only momentarily though, as Elkins locked his opponent up, cleared his head, and went right back to work against the fence.

Two hard knees to the head got the final round off to a good start for Martins, then the smothering continued, with Elkins pinning his opponent to the fence. With little action taking place, referee Osiris Maia restarted the fight twice, but Martins wasn’t able to turn things around.
> Watch: Darren Elkins Backstage Interview 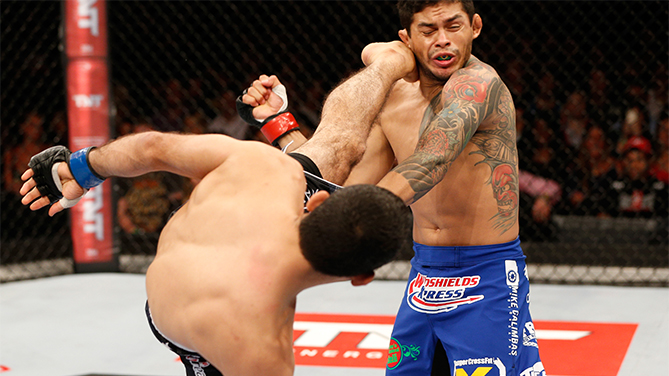 The decision of lightweight prospect Diego Ferreira to step in on short notice to replace the injured Alan Patrick against Beneil Dariush proved to be a costly one, as Dariush pounded out a one-sided unanimous decision win.

Dariush (9-1) had a good first round, with his striking game keeping Ferreira at bay throughout. Ferreira (11-1) did remind his opponent that he was still around by flurrying in the final minute and going for a leg lock later, but his striking timing was off in the opening frame, allowing Dariush to lock the round up.

The second was another solid one for Dariush, mainly fought on the mat, and even though the fans weren’t particularly happy with the action, California’s Dariush wasn’t complaining.

Hoping to turn things around, Ferreira came out firing in the final round, landing some good shots in the middle of his flurries. But once Dariush got a hold of Ferreira and put him on his back again, he was able to regain control of the fight and ride out the victory.
> Watch: Beneil Dariush Backstage Interview