Davie earns trip to the Hall on 25th anniversary

The Friday before a non-fight weekend may have seemed like an odd time for the announcement that UFC co-founder Art Davie was going to join the UFC Hall of Fame’s Class of 2018.

But April 27 was the perfect time for the Brooklyn native to get his call to the Contributor’s wing of the Hall, as it marked the 25th anniversary of the day Davie received a fax from SEG (Semaphore Entertainment Group) agreeing to produce the UFC’s first event on Pay-Per-View on November 12, 1993. 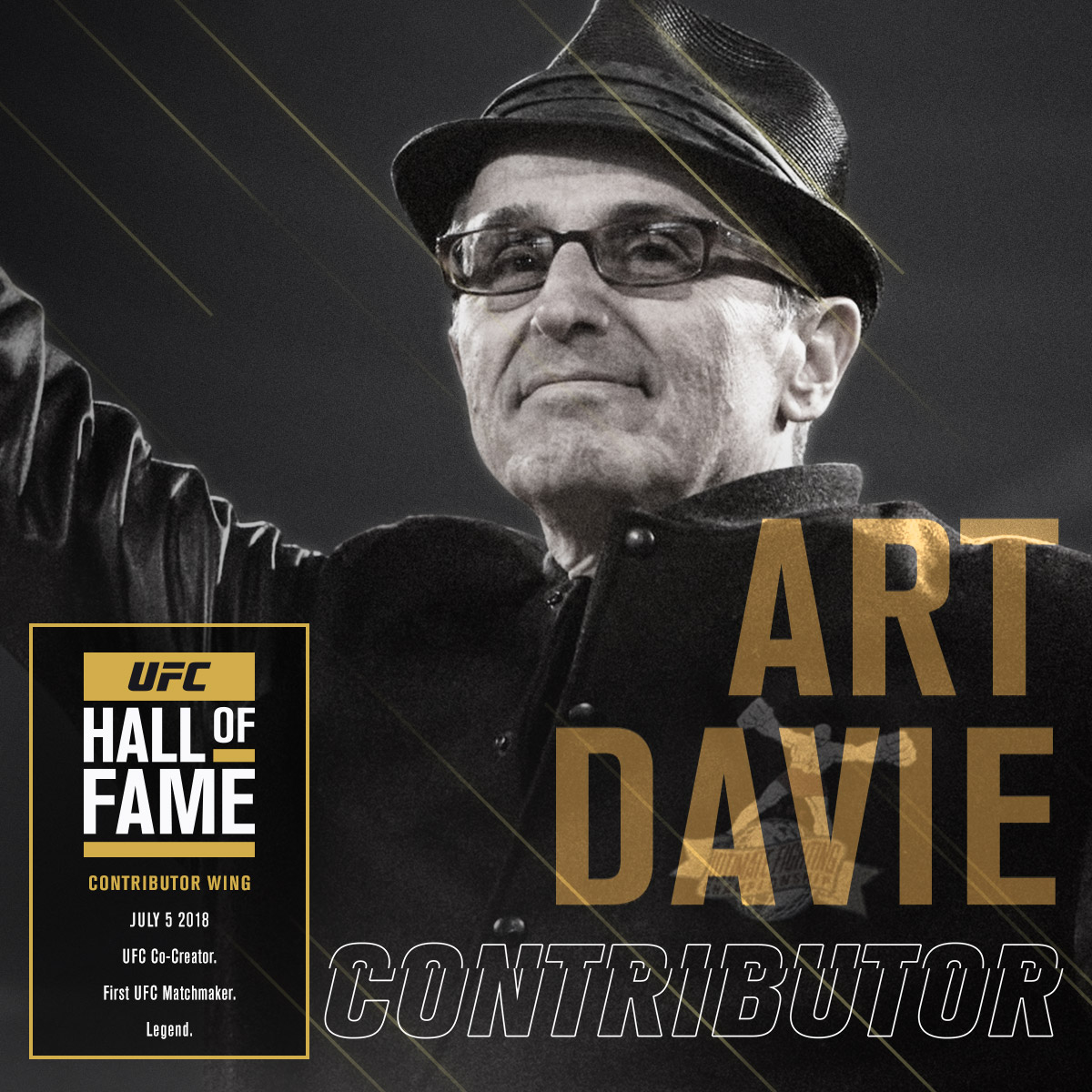 Little did he know where it all would lead.

“To see how far this has evolved and how far it’s moved, it’s real exciting,” said Davie. “When you look at what’s happened in the last 10, 15 years, Zuffa moved this into the mainstream, and it’s really a pleasure for me to see that there’s now an interest in educating the fan about the early years and how it all began. So it’s been a great opportunity for me, and I can honestly say that I’m real thrilled that they’ve extended this invitation to induct me on July 5th.”

Today, the UFC’s Octagon travels around the globe, attracting millions of fans as its stars have become a part of popular culture. Yes, Davie couldn’t have possibly predicted where the sport he helped create was going, but then again, don’t put anything past him, as he always had a vision that what would become mixed martial arts was something everyone could relate to. And always had been.

“(The first UFC’s creative director) John Milius and I used to talk about this in terms of what it was and where it was going,” said Davie. “And John knew that I had been inspired by pankration. My great inspiration for the UFC was not kumite in Asia, it was the fact that for more than a thousand years, the most popular sport and the only sport to rival it was horseracing, was something called pankration. And other than no biting and eye gouging, there was kicking and punching, throws, holds and chokes, grappling and striking, and it lasted for 1,041 years until the Roman Emperor banned it. So we used to talk about the fact that down the road, given the fact that maybe soccer and fighting are the two sports that young men and women would be interested in worldwide, in a way it’s not a shock to see how this has grown. And when I’m asked where I think it will be long after I’m gone, it will be bigger. You’ll be crowning the Ultimate Fighting champion and who knows how many people worldwide will be fascinated by that particular bout that night.”
DAVIE NAMED TO HALL OF FAME LAST FRIDAY

Twenty five years after that first event at McNichols Arena in Denver, we can now celebrate the history of the promotion and still have the opportunity to hear first-hand from those who created it, like Davie. But some of us have a theory that if Royce Gracie, the skinny kid from Brazil who found a way to make three opponents quit that night with a then-mysterious martial art known as jiu-jitsu, doesn’t win the first UFC tournament, maybe there isn’t a UFC today. Why? Well, Gracie was the least intimidating competitor in a field that included Ken Shamrock, an intimidating figure straight out of central casting who would one day earn his own spot in the UFC Hall of Fame. He was the favorite and he looked the part. If he wins, well, everyone’s predictions were correct: the big, imposing guy will always get his hand raised in a fight.

“I was eager to have Rickson (Gracie) be the Gracie athlete and (UFC co-founder) Rorion (Gracie), by July, had not made a selection,” recalls Davie. “In May, I’m getting people responding to my ads in the magazines and my faxes and my phone calls. And Rorion said, ‘You know, forget my political problems with Rickson; it would be better to have Royce.’ I said, ‘Why?’ And he said, ‘He looks like a little altar boy in that white gi. If he wins the event, it’s the Bruce Lee thing. A little guy with skill can beat a big guy.’ They wanted to see if the skill was going to be dominant. Ken Wayne Shamrock looked like Captain America. And with that name, it was a marquee name, he had that handsome face, that big jaw, the muscles and the red speedo. If he wins, I’m not sure we’d be talking today. I think you might be right about that.”

Gracie did win, and fans kept tuning in. It was a victory for Davie, who put in a lot of behind the scenes, thankless work, filled with rejection, to get the UFC off the ground.

“So many people seemed to have the same response,” he said of the recruiting process for the event. “They wanted to know if I was casting for a movie. What are you talking about? I’m talking about a no holds barred event. ‘You know, my guy looks really good in front of the camera. Is this a movie? Are you looking for someone to play the karate guy?’ I’m looking for a fighter. (Laughs) So that was an ongoing problem and it was exacerbated when I had to call Japan looking for a sumo wrestler. They would hang up on me.”

Even in the States, Davie ran into brick walls when looking for fighters. He recalls talking to the late, great boxing trainer Emanuel Steward about bringing in a heavyweight from his Kronk Gym in Detroit.

“He said, ‘You want a heavyweight boxer to fight one of these guys in karate pajamas. What are you smoking or drinking and how come you’re not sharing?’ (Laughs) I had the same problem at Joe Frazier’s Gym, but I got two cutmen out of that, the great Leon Tabbs and the great Sam Solomon, but no boxers.”

And before SEG joined the party, the likes of HBO and Showtime turned Davie down, saying that there was no way this concept would work. But Art Davie is a Brooklyn guy, and Brooklyn guys don’t go away without a fight.

“I said, ‘I’m gonna be the guy that’s gonna monetize the martial arts,’” Davie said. “They laughed. They thought I was nuts. But I was adamant and I had two things going for me. One, I wasn’t a fighter, but I was a salesperson and I was persistent. And once I had decided I was gonna do something, it was very tough to stop me because I would just keep coming. You couldn’t hurt my feelings.”

“This has really become what it needed to be,” he said. “Rorion used to say, ‘If you’re at a football game and a fight breaks out in the stands, everybody looks at the fight in the stands.’ (Laughs) It’s primal, we all want to watch it. So what the UFC did was take something and finally packaged it and presented it in such a way that it could really travel to where it’s gone.”