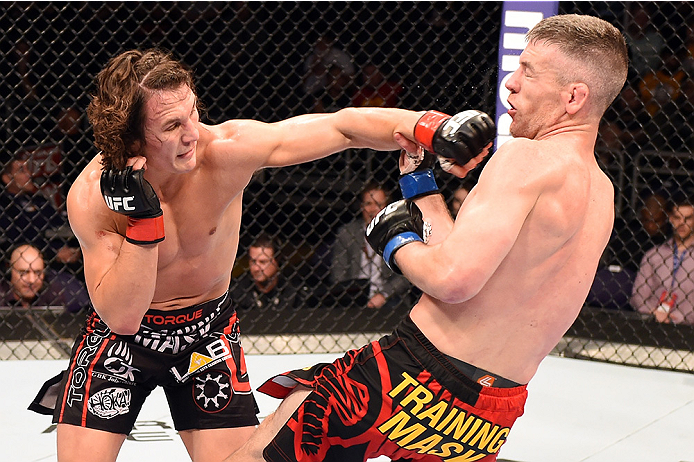 If you’re lucky in this life, you’ll have one place to call home. David Michaud has two. The current one is in Glendale, Arizona, where he plies his trade as part of the renowned MMA Lab team. The other is the one always close to his heart in Pine Ridge, South Dakota, and though he doesn’t get as much time there these days due to his day job as a fighter in the UFC’s lightweight division, when he does return, he tries to make the most of it.

“It’s usually three months to train, then home for one month,” he said. “So when I’m home, I try to do whatever I can to help out or work with kids and volunteer my time as much as I can, but I can’t do as much as I used to. It’s tough thinking that way, but on the other hand, when I do go home the kids are like ‘oh man, it’s BullDawg.’ I know I’m in the best place for me to be to further my career and I see how happy it makes everyone back home whenever I do good. So it’s kind of a balance.”

In Glendale, he’s rounded out his mixed martial arts game and picked up the knowledge necessary to earn his first UFC win last December over Garett Whiteley, and though the win was nice, the big takeaway for the 26-year-old was how he was treated in his adopted home state on fight night in Phoenix.

“It was all great,” he said. “I felt like mostly everyone was behind me in the arena. Maybe they weren’t David Michaud fans (Laughs), but maybe they were Lab fans or it was just the fact that I’m training in Arizona, but whatever it was, they sure seemed to be behind me and that was good. Getting that win was huge. Every journey starts with one step and that was the first step to where I want to go.”

Michaud made a good impression in his first Octagon bout, though he lost a close split decision to Li Jingliang in May of last year. And despite the pressure that comes along with being 0-1 in the UFC and fighting in a new weight class, he was calm, cool, and collected heading into the Whiteley bout.

“I wasn’t too worried about getting the win,” he said. “I know some other people who had lost their first fight in the UFC and they were worried. They were thinking ‘oh, if I lose this one, I might get cut, if I don’t have a good performance, I might get cut,’ But with how much work I put in and with my training partners, I had no doubt that I was gonna win. It (losing) wasn’t something that was in my mind. I was just worried about going out and fighting. I was just happy to get in the cage. I don’t put too much negative pressure on myself. I don’t really think about the bad things too much like some other people do. I just get in there and do my best.”

It’s a rare attitude in a sport where fighters are often looking over their shoulders after a loss or two, wondering if and when the axe will fall and send them back to the regional circuit to rebuild. Michaud is not that guy, making him more than unique among his peers.

“It’s my sunny disposition I guess,” he laughs when asked where he got that philosophy from. “I don’t like negativity, I don’t like people being down on themselves. Everyone’s got bad days. I’ll have days in training where I get roughed up – those are a lot of days (Laughs) – but you have to keep things in perspective. I know a lot of people who would give a lot to be where I am. I know a lot of people who are a lot less fortunate than me, I know tons of people who were not given the opportunities that I was given. So I just have to push myself to make the most of it for people who might not have been able to do what I do.”

That goes for his personal life as well, as Michaud’s trips home to South Dakota include volunteering with the Pine Ridge wrestling team that he graduated from before heading off to South Dakota State and then mixed martial arts. He’s even in the midst of a fundraiser to help send the team to off-season tournaments that he believes not only help the young people of the team athletically, but socially as well.

“During the season, the school takes them, but with the post-season tournaments, they’re a couple days long, and I’m trying to raise some money so they can actually go and get some hotel rooms or at least gas money,” he said. “I’m trying to help out and give back to something that really made me who I am today. I came from the same place as them and I know how good it is to just get away and go do something positive for even a weekend.”

Michaud’s fellow fighters have stepped up too, providing autographed items to be raffled off to those contributing to the fundraiser. And the funny thing is, it all started off with a pair of Michaud’s autographed gloves that he didn’t think would garner any contributions or notice.

“I was asking around, saying I’d like to raise money but I didn’t know what to do,” he said. “Someone told me, ‘Well, do a raffle for some signed gloves from you.’ I’m thinking no one’s gonna want to buy my gloves. (Laughs) So I put it out on my fan page and hundreds of people responded. It’s weird to think that I can make some kind of difference and help out some kids.”

It’s only going to get bigger from here for the promising 155-pounder, but first there’s the business of his UFC 186 bout with Olivier Aubin-Mercier in the Canadian’s backyard of Montreal. That could be an intimidating prospect for anyone, but don’t forget, Michaud doesn’t think like most fighters.

“I’d be worried if everyone in the Bell Centre could come in the Octagon and help him fight me, but whenever the gate closes, it’s me, him and the ref, so I’m not too worried,” he said. “The crowd does make a difference and it can help carry you, but I’m not going to let that in my head at all. I know what I’m there to do, no matter who’s cheering for me or who’s cheering against me. I’m gonna go in there and fight to the best of my ability and I’m gonna win.”