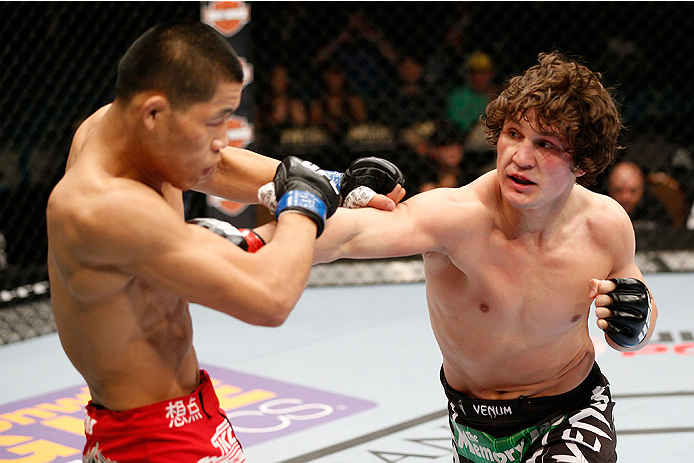 With a history that has seen him compete at welterweight, middleweight, and even light heavyweight, David Michaud definitely fits into that “anytime, anywhere, anyone” category of fighters. And though he admits to knowing his limitations - hence a drop to 155 pounds for his Saturday bout against Garett Whiteley in Phoenix – when it was jokingly suggested that he would probably take a bout against heavyweight champion Cain Velasquez on short notice if asked, he chuckled, but didn’t dismiss it either.

“If they were to offer me Cain Velasquez next week, it would have to be a helluva money deal for me to take it,” he said.

Those are the words of a fighter, and the 26-year-old fits the bill completely, but as an educated young man with a journalism degree from South Dakota State in his back pocket, he’s no fool either, so despite winning amateur titles at 185 and 205 and giving a solid effort in his late notice UFC debut against Li Jingliang in May, he knew that to give himself the best shot at making a run for a title, it would have to be as a lightweight.

“It's the first time I've been this light since I've been out of high school,” Michaud laughed, two weeks out from his biggest weight cut yet. “Even at 170, training with Joe Riggs I just felt that he was too big. If I was going to be at '70, I'd have to put on about 10 pounds of muscle because my height is just not there. It's tough. I know there are guys about my same size – (Johny) Hendricks, (Kelvin) Gastelum, Tyron Woodley - and they have a lot of success, but I felt like I'd have more success with my style at 155.”

At 5-foot-9, Michaud won’t be the tallest lightweight out there. In fact, he’ll be giving up three inches in height to Whiteley, but he will have the opportunity to face opponents that he can hold his own with strength-wise, and in a game where every advantage helps, that’s a big deal.

The move wasn’t a spur of the moment thing based on his split decision loss to Li though, as his last pre-UFC bout in January against Carey Vanier (which he won via first-round submission), was contested at 160 pounds. But when the UFC called with an offer for him to step in on short notice for the Li bout, 170 it was.

To get him ready for Saturday night, the Pine Ridge native has plenty of help, as his team at the MMA Lab in Glendale has a packed house of fighters competing on the Phoenix card, including Bryan Barberena, Joe Riggs and John Moraga.

“It's pretty awesome,” Michaud said. “Me and my buddy Bryan, he's making his debut, and we're both 155, both getting ready, and we've been going in there every day and just killing it. It's great having someone like that, and we've got Joe Riggs and John Moraga, two guys who fought for UFC titles, to see how they're preparing for their UFC fights, and it's great to have that support and see what everyone else is doing, so we push each other and try to work a little harder than each other every day in a good kind of competition.”

Michaud isn’t just pushing for the opportunity to get into the UFC win column for the first time, though that would be nice for the Ultimate Fighter 16 competitor. He also wants to win for the sizeable fan base he has at home on the reservation in Pine Ridge, one that has been behind him since his amateur days.

“I've had so much support, I don't even know how to explain it,” he said. “Ever since I first started fighting in high school, I had success right away, and in my amateur fights, we'd have fights where there were 2,500 people there, and in small town South Dakota, that's quite the crowd. We'd get 1,500 people just from the reservation up to watch us. We'd have five, six guys on the card, and they'd just go wild for us.”

That backing hasn’t stopped, but these days it comes with a twist, as the scrappy fighter dubbed “BullDawg” isn’t just some guy in the UFC; he’s an example to the kids in his community of what you can become with hard work and determination.

“I always try to go home as much as I can, I'm always around kids and stuff, and it seems like they look up to me,” Michaud said. “They're always asking me stuff, and if I can inspire someone to be a little better than maybe they think they could be or to strive for something they didn't think about before, then I want to try that. But I always try to live my life in a good way so that whenever people do look at me, they don't have anything negative to say. I know a lot of kids do ask about me fighting and me going to college and graduating, and I just try to give them something to emulate.”