"There’s still only one thing in my mind, and all I’m thinking about is getting this win against Roland." - Davey Grant 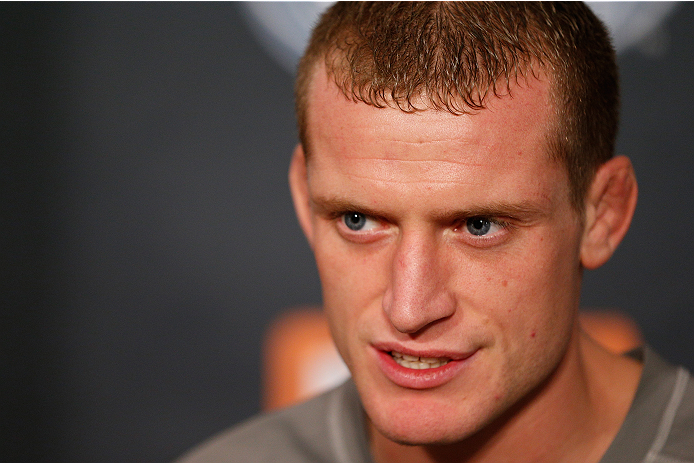 The tendency in fight coverage is to always look forward, but more often than not, the story begins by looking in the rear view mirror to see where someone has been before they arrive on site to fight a new opponent. That doesn’t mean looking at the last eight weeks of training camp, but sometimes a little, and sometimes a lot, further back.

For Davey Grant, a native and resident of Bishop Auckland, County Durham, England – population 24,392 (as of 2001) – we begin in the locker room at the Mandalay Bay Events Center in Las Vegas last November 30.

Moments before, Grant has lost his Ultimate Fighter 18 final bout to Chris Holdsworth. Grant was the underdog going in against the unbeaten submission ace, but you couldn’t tell the Brit that going in. He was quietly confident, but confident nonetheless, and when he was submitted via rear naked choke in the second round, he was inconsolable.

“I was truly distraught,” said Grant. “Especially when you feel that you just got caught and it was silly little mistakes that I should never have done. I felt like I threw the fight away. Everything was going all right and then you make just one little tiny mistake that you wouldn’t even usually do and then everything breaks away from you. I blame myself so much, and it was horrible. I felt like I let everyone down and let myself down, and I just wanted to get back in the gym and right all the wrongs straightaway. It was heartbreaking.”

Talking about the fight over three months later, you can still hear the hurt in Grant’s voice.

“I was devastated to have gone and lost the fight on the last hurdle,” he said. “But Chris is a great fighter and he took the fight from me on that night.”

Truth is though, Grant didn’t let anyone down. Not his teammates and coaches at home or on TUF, not his fiancée, not his two kids, and certainly not himself. He fought hard, competed, and in a sport where there is only one winner, he came up short. There’s no shame in that, and by the time the 28-year-old Grant got home, it was back to work as he sewed up the holes in his game and waited for the UFC to call. He didn’t have to wait long, as he got a fight with Canada’s Roland Delorme that will take place in London’s O2 Arena this Saturday.

Delorme wasn’t dismissing Grant after the loss to Holdsworth either. In fact, he was quite complimentary in a fighter to fighter sort of way, saying of his opponent in his official UFC bio update, “He's big, tough, and mean, and likes to be the bully in the cage, so I just gotta be the matador in this fight.”

“I wouldn’t say I’m exactly mean,” he said. “I like to think I’d be mean in the cage, but I’m not really mean outside of the cage.”

He did appreciate Delorme’s comments though, and the respect is mutual.

“I watched his last fight against Bruce Leroy (Alex Caceres), and he’s really aggressive and likes to push the pace. He’s got a really good ground game and he’ll use his standup a lot to get his takedowns as well. His strength’s in his grappling, as he seems really slick on the floor, but he looks as if he comes to fight, and he brings it every fight. I think it’s gonna be a helluva fight.”

And one Grant can only see one outcome to. Not in a cocky way, but in a way that after getting thisclose to the brass ring and not getting it, he’s not going to let that happen again. Not on Saturday, not at home, not at all.

“It (fighting in London) is going to be brilliant, but I’m just not gonna let it get to me,” he said. “I have to concentrate on the task at hand and really focus on the fight and not let that get the better of me. There’s still only one thing in my mind, and all I’m thinking about is getting this win against Roland. I’m not gonna let my emotions get in the way – it wouldn’t matter where in the world it was, to be honest. I’m going to go in there one hundred percent focused and get after that win.”