England's Davey Grant Has Battled Layoffs, Injuries And A Pandemic During His Initiation Into The UFC Bantamweight Division. His Next Test Awaits Saturday Night At UFC Fight Night: Edwards vs Muhammad
By McKenzie Pavacich, on Twitter @mpavacich_ • Mar. 11, 2021

An eight-month turnaround between fights usually isn’t anything to raise your brows at, but for Davey Grant, it’s the light at the end of a frustratingly long tunnel.

The product of Darlington, England has spent more time in his UFC career sidelined by injury than he’s had to showcase his skillset, something to which he says, “You just gotta roll with the punches, I suppose.”

So when “Dangerous” Davey sat down for his interview with the UFC.com ahead of Saturday’s UFC Fight Night: Edwards vs Muhammad bout against Jonathan Martinez and said he felt “great, but hungry,” it was pretty obvious that he meant more than just the literal hunger that’s accompanied by making weight. 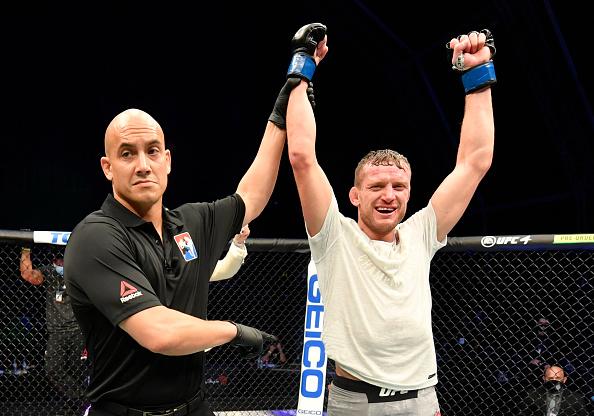 Davey Grant of England reacts after his knockout victory over Martin Day in their bantamweight fight during the UFC 251 event at Flash Forum on UFC Fight Island on July 12, 2020 on Yas Island, Abu Dhabi, United Arab Emirates. (Photo by Jeff Bottari/Zuffa

“I’m just happy to be here,” Grant said with a smile the size of a kid’s in a candy store. It’s easy to tell this statement carries a little more weight coming from him, as Grant has had to patiently overcome an insurmountable amount of adversity just to get here.

The bantamweight’s second UFC fight was delayed by two years after he suffered a torn meniscus the day before his originally scheduled fight in March 2014, and was followed by a slew of additional injuries. Grant finally made a splash in his return in February 2016 with a dominant decision victory over rising star Marlon Vera.

MORE UFC VEGAS 21: Fighters On The Rise | Fight By Fight Preview | For Charles Jourdain, It's Never Over | Significant Stats | Misha Cirkunov Plans To Make Up For Lost Time | Ryan Spann Must Win The Battle Of Wills

Later that year, Grant broke his arm in his submission loss to Damian Stasiak, which led to an additional 18 months away from the Octagon. He said at the time that he “felt [my arm] cracking when I was in the armbar, but I just didn’t want to tap, it meant too much.”

Grant’s next return to the cage was delayed by a few months due to a staph infection, but ultimately ended in a second submission loss in July of 2018. Another 16 months later, Grant made yet another reintroduction of himself with a split decision victory over Grigorii Popov in November 2019.

"I want to be in exciting fights."@DaveyGrantMMA discusses why his upcoming #UFCVegas21 fight with Jonathan Martinez motivates him, getting back into the Octagon after his recent KO win and more 🔊⬆️ pic.twitter.com/JgqCePCdcw

That preparation and perseverance was finally starting to pay off, as Grant was able to put his two-fight skid behind him, only to next be met by a pandemic that crippled every continent. But at this point, Grant had prepared for years to persist through the unthinkable, so when he was offered a spot on the UFC 251 card on UFC Fight Island, only a few small adjustments had to be made.

“Every fight week is a little different anyway, so you just have to take it as it comes. I like to just enjoy the surprises,” Grant said of preparing for a fight week with additional restrictions put in place. “Abu Dhabi was totally different than anything I’d done before.”

You’d never guess it, though, as The Ultimate Fighter 18 alum looked right at home at the inaugural UFC Fight Island event, knocking out Martin Day halfway through the third round.

It came at the cost of a jaw fractured in two places and a fractured nose, but Grant’s Performance of the Night showing against Day was exactly what he needed.

“I remember after the first round I just sat in my corner pushing my mouth together trying to get my teeth to go straight. But I just thought, ‘Well that’s all right, you’re still here.’ So you just gotta keep fighting, stick to your gameplan.”

That gameplan got the Brazilian jiu-jitsu purple belt a call just four months or so later to book another fight.

Just got back from the hospital. Jaw is fractured in 2 places and also a fractured nose! But thank you @danawhite @seanshelby @ufc for making this happen it’s everything I wanted and I’m so grateful to have had this opportunity 🙏🏻 respect to Martin Day true warrior 👊🏻 https://t.co/04mo7crGKm

“It’s great to get back in. This is probably one of my quickest turnarounds, and it’s not exactly a quick turnaround in the grand scale of it all, but it’s really good to get back in,” Grant said. “After the knockout, I was absolutely buzzing. Even my jaw didn’t keep me out for that long; I was straight back in training to get a fight again this quick.”

This time around, Grant’s biggest opponent isn’t a pesky lingering injury or the mythical ring rust, but yet another up-and-comer also looking to score his third-consecutive win in the American, Martinez.

“I think he’s a great striker, but to be honest, I think I’m better,” Grant said with a smile. “Honestly, not trying to be big headed or anything, but if I was looking at the tapes of both of us, I’d say that I’m the better, more technical one, so I’ll be looking to strike with him as well.

"A lot of my wins have come by submission, so a lot of people think I’m more of a grappler than what I am a striker, but the reality of it is that most people just try to take me down because they don’t want to deal with my strikes, and then I end up subbing them. That’s how a lot of early fights went in my career. But I’ll take anything; I like to think I’m a pure all-rounder, so wherever the fight needs to go, I’ll be fine.” 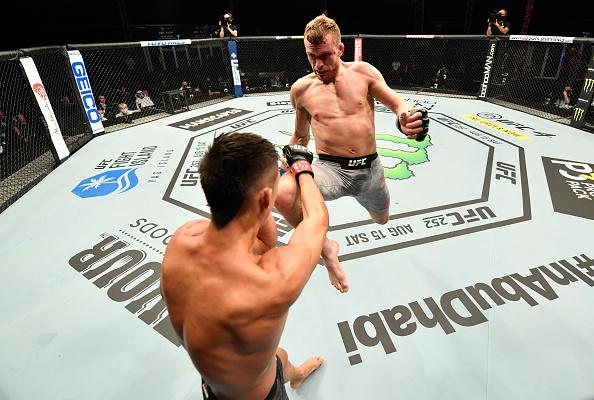 Whether the fight goes to the ground or stays on the feet, Grant is sure of one thing: he’s worked too hard and for too long to let anything get in the way of his success.

“I’m just really enjoying the ride at the minute,” Grant said. “It’s really nice to finally get some momentum behind my career. It’s been a bit up and down, but I know what I’m capable of, I know what my potential is, and I just can’t see him stopping me.”