Dave Shaw: "This Is A Big Week For Canada"

“This is a big week for Canada,” said Shaw. “The baseline of Canadian fans that continue to stick with us is something that we don’t take for granted for a second and we feel pretty grateful for all the support."
By E. Spencer Kyte • Jul. 24, 2019

A dozen of the 19 events remaining on the UFC’s 2019 fight calendar between now and the end of the year are international affairs, beginning with UFC 240 this weekend in Edmonton, Alberta, Canada.

While August includes domestic dates in Newark, New Jersey and Anaheim, California and there are a handful of other stops throughout the United States dotting the home stretch, the final five months and change also include return trips to Moscow, Russia; Kallang, Singapore; and Sao Paulo, Brazil, as well as a six-week run of events where the Octagon won’t touch down Stateside, beginning with UFC Fight Night: Andrade vs. Zhang in Shenzhen, China and culminating with UFC 243 at Marvel Stadium in Melbourne, Australia, headlined by the middleweight title unification tilt between Robert Whittaker and Israel Adesanya.

“September is going to be pretty busy with Abu Dhabi, Vancouver, Mexico City and Copenhagen, with Shenzhen on the front end and Melbourne on the back end,” said David Shaw, UFC Senior VP of International and Content, while in Vancouver for the on-sale event for the September return to Rogers Arena, where all-action lightweights Donald Cerrone and Justin Gaethje collide in what has universally been heralded as a Fight of the Year contender on September 14.

In addition to being internationally heavy over the next several months, one of the other interesting pieces of the UFC schedule in the coming weeks is that championship fights will headline five of the next six events, which includes the debut fight cards in Montevideo, Uruguay and Shenzhen, as well as the promotion’s return to Abu Dhabi on September 7 for UFC 242: Khabib vs. Poirier.

Although championship fights are a fixture of pay-per-view shows regardless of where they’re being held, it’s rare that title fights take place on non-pay-per-view events, but the twin August debuts presented unique opportunities for the organization to make a serious splash with its first events in those markets.

“With Montevideo, you had this scenario where all of a sudden Valentina Shevchenko was like, ‘Yeah, I’ll fight right away,’” Shaw said of the UFC flyweight champion, who took no damage while successfully defending her title against Jessica Eye in the co-main event of UFC 238 at the beginning of June in Chicago.

But with the lineup for the next several pay-per-view events already set and the next realistic opening not available until November, the UFC recognized a chance to pair the ultra-talented titleholder with South American ties against the first woman to defeat her, veteran Liz Carmouche, in the main event of the company’s maiden voyage to Montevideo.

“She speaks Spanish, has a well-documented history in Peru and there was a fight to make with Carmouche,” Shaw said of Shevchenko. “But the most defining reason I would say (things came together the way they did) is that she wanted to fight and we had a fight for her.

“(As for) Shenzhen, (UFC President) Dana (White) was pretty vocal about the fact that you don’t get situations like this that often, where we have a Chinese athlete competing for the belt and we’re really making a concerted effort to grow the business in China,” he said of the strawweight title fight between newly minted champion Jessica Andrade and challenger Weili Zhang, the surging 29-year-old who has extended her winning streak to 19 with three straight victories inside the Octagon, including a unanimous decision win over Tecia Torres back in March.

”I think he thought it was a tremendous opportunity to bring something special to China and really help accelerate the growth.” 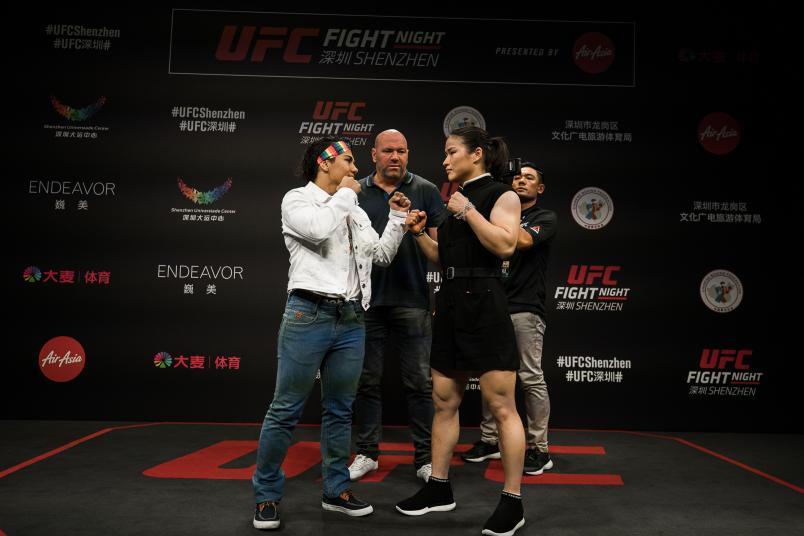 Growth and sustainability are two of the most important considerations for the Shaw and the UFC as they continue to break new territories and help existing markets continue to flourish, but neither come easily because the process of determining where to go and when, as well as how to stock each individual fight card so that it has both local and global appeal are all elements that need to be considered and don’t always mix well.

“Everywhere we go, people are always like, ‘When are you going to come back?’ and ‘Why did you choose here at this time of year?’ We don’t have the luxury of choosing the best city at the best time of year because every country has got their programming schedules and their sports seasons and their political events and all these different things that make it really tough.”

Doing anything in Canada in April, May and June is a challenge because of the NHL’s Stanley Cup Playoffs, just as there are certain periods where it’s difficult to gain traction with an event in Australia because of the NRL Grand Final and the AFL season.

The other piece of the puzzle is putting together cards that are both appealing to the local, ticket-buying public and the audience watching around the world. While it’s difficult to always please everyone, every card — whether international or domestic — is crafted with the same general premise in mind: give the UFC fans the best fights possible in the present, while always keeping an eye on the future.

“We have a perpetual view that the long game is the most important game,” said Shaw. “I don’t know whether we can always appease everybody and we’re fine with that, and I mean that in a very respectful way.

“Saint Petersburg is a great example,” he continued, referencing the company’s debut in the Russian city in April. “We come to Russia and you’ve got Russia proper; you’ve got the former Soviet countries and then you’ve got places like Dagestan and Chechnya that are hotbeds of MMA and you’ve got to blend (the lineup) to make sure we’re delivering to what we understand is our audience at that time. 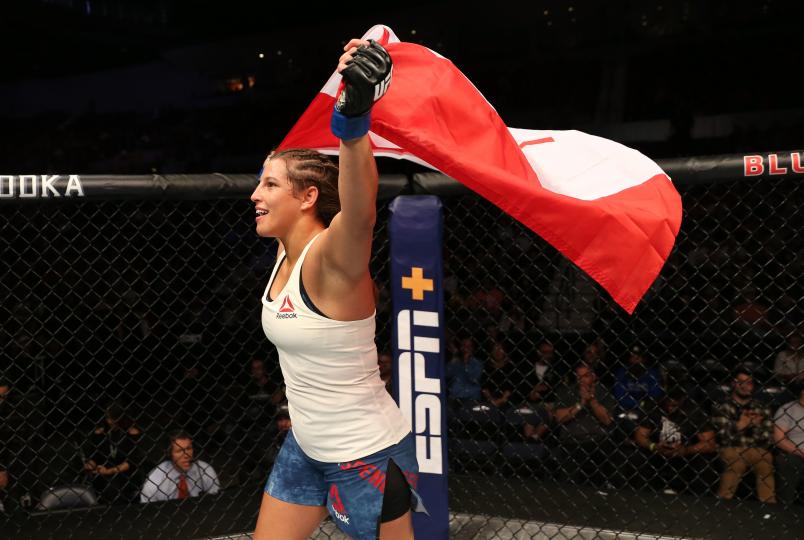 ROCHESTER, NY - MAY 18: Felicia Spencer of Canada reacts after her victory over Megan Anderson in their women's featherweight bout during the UFC Fight Night event at Blue Cross Arena on May 18, 2019 in Rochester, New York. (Photo by Michael Owens/Zuffa LLC/Zuffa LLC via Getty Images)

ROCHESTER, NY - MAY 18: Felicia Spencer of Canada reacts after her victory over Megan Anderson in their women's featherweight bout during the UFC Fight Night event at Blue Cross Arena on May 18, 2019 in Rochester, New York. (Photo by Michael Owens/Zuffa L

“Does that jibe with what a North American audience wants to see? (Maybe not), but if you’ve got someone in Vancouver or Orlando or Sydney and they’re MMA fans, you want to see the best talent, and that’s what we’re trying to find. We’re okay seeing maybe smaller numbers with TSN or Globo or Fox Sports/ESPN in Australia if we know that over the long run, we’re going to find the next Khabib (Nurmagomedov) or the next Zabit (Magomedsharipov).”

Which brings things back around to both this weekend in Edmonton and September in Vancouver, two strong Canadian markets that will host quality events headlined by outstanding main events.

“This is a big week for Canada,” said Shaw. “The baseline of Canadian fans that continue to stick with us is something that we don’t take for granted for a second and we feel pretty grateful for all the support.

“Dana really has a soft spot in his heart for Canada and he understands and never forgets what Canada has meant to the growth of the sport.”

Which makes it fitting that the UFC’s extensive international schedule to close out the year kicks off in the Great White North this weekend.