Dave Herman - Right on Schedule, His Own

"That first year I’m trying to learn all this new stuff, and you don’t realize how little you know until you get taught." - Dave Herman 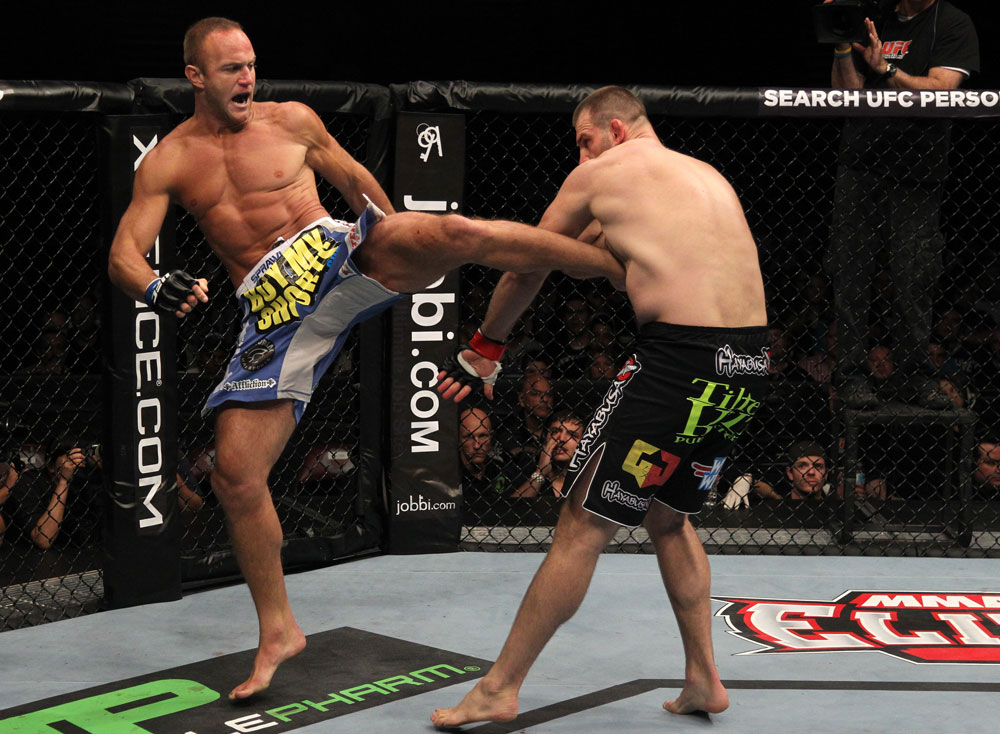 There are a lot of perks to being in the UFC. Heavyweight Dave Herman is kind of partial to one in particular: when he gets a contract to fight, he fights.

Sounds simple, but for Herman and any of his peers who came up on the local circuit, just having someone to show up when they’re supposed to isn’t always a given.

“There were many times when I was literally in my car driving to the fight, and I get a phone call, ‘hey, your opponent backed out,’” he said, “Or I show up and I’m at weigh-ins, the dude’s right there, and he’s like ‘I ain’t fighting that guy.’ Sometimes opponents changed that night.”

Well, Herman’s opponent in this Wednesday’s UFC on FUEL co-main event, Stefan Struve, has joined him in Omaha, Nebraska, and it’s safe to say that he’s going to be there on fight night as well. That’s good news for Herman, who is looking to rebuild the momentum he had after stopping John-Olav Einemo in his Octagon debut last June. The Indiana native was scheduled to return against Mike Russow at UFC 136, but a pre-fight drug screening saw him test positive for marijuana, a charge he vigorously denies. Nonetheless, he wasn’t licensed in Texas, keeping him on the sidelines until the call came for the Struve fight.

“The day I found out it was a rough day,” said Herman of not getting licensed. “But then I accepted it and said well, there’s not anything I can do about it, so I just moved forward. But right when I heard the news, it was heartbreaking.”

What added to the disappointment was that fans were intrigued about seeing the 27-year old back in action thanks to his Fight of the Night win over Einemo, his 21st win as a pro and clearly his biggest. But it was not to be. Yet in a cloud with a silver lining scenario, the Struve fight has the potential to be even more exciting than a scrap with Russow would have been.

“I think Russow actually was a pretty good stylistic matchup for me, but not necessarily from an entertainment standpoint,” said Herman. “I think this guy (Struve) will be way more entertaining, and way more fun to watch, so hopefully we’ll be able to put on a good show.”

And nab another Fight of the Night award?

“I wouldn’t say I’m counting on it, but it’s definitely a goal and one I plan on working very hard towards,” he said. “That’s what it’s there for – fight harder, make sure you come out ready to go and give the people what they want to see. It’s not guaranteed, so if you come out expecting and you don’t get it, you’re setting yourself up to be let down. But it is something extra to work towards, a little extra incentive to win.”

To win against the 6-foot-11 “Skyscraper,” the 6-foot-4 Herman will have to deal with the unique matchup difficulties any Struve has to address. So is it possible to even replicate an athlete of Struve’s size in the gym?

“I haven’t really tried to replicate it all,” he said. “You can try to get tall people in, but I haven’t actively looked for anyone. Obviously he’ll have a reach advantage and advantages on everything that being longer can help you with, but at the same time, there are disadvantages, so it’s whether you can take advantage of them or he can.”

At least now, when it comes to preparing yourself for opponents of all different shapes, sizes, and talent levels, Herman has Dan Henderson and the Team Quest squad in Temecula, California to get him ready. Back through the first 15 fights of his pro career from 2006 to 2008, he was just winging it, and it goes back to the whole Wild West feel of the local fight scene, where a bout on Wednesday may not be a bout on Friday.

“Let’s say I’ve got a date, and I’m doing cardio,” he explains. “‘Okay, I’m gonna work hard and get ready for this date,’ and then I’m on my way there and they say it’s not happening. I just worked out for two or three weeks for nothing. I put in all this work and it’s disappointing. That happened to me like eight times.”

So in response, Herman just adapted.

“I just cut out the one aspect of it,” he said. “I just won’t get ready. Now I won’t get the disappointment.”

Strangely enough, it worked, as the former Indiana University wrestler went 15-0 in those first 15 bouts. But in bout 16, he got stopped in the second round in Japan by Choi Mu Bae, and it was the sign he needed that changes were required. And it’s been a successful switch for him, considering his 6-1 record (the only loss coming via disqualification to Rameu Thierry Sokoudjou in 2010) since deciding to actually train for fights. He’s made it look easy, but it was far from it.

“The first year of training was the hardest one,” said Herman. “It turned from ‘man, this is fun, I don’t really have to do much, I’m getting paid, this is awesome,’ (Laughs) to work, and I had to actually show up every day. That first year I’m trying to learn all this new stuff, and you don’t realize how little you know until you get taught. And then you’re like ‘wow, I was doing everything wrong.’ So I was overthinking everything that first year. Prior to that I never had any trouble, I never had any problems, I didn’t have a thought or care in the world, and it didn’t matter that I was doing it wrong. ‘I hit the guy, did I hit him right? It doesn’t really matter, he fell asleep.’ That was a little rough, and getting the technique into habit and getting rid of all the bad habits I came up with on my own was the hardest part, and I’m still working on that now, but I feel a lot better about it.”

And here he is, in the UFC, in a co-main event slot against Struve, and a star on the rise in the heavyweight division. Looks like all the puzzle pieces fell into place, eh? Well, he definitely wouldn’t have changed a thing.

“On one hand in hindsight, if I had started training sooner, I could be more advanced in my training and my career, I could be making more money and be a much more skilled fighter, but at the same time, I was having fun, I was being me, and I haven’t traditionally been known for making the best decisions (Laughs), so it’s a work in progress and I wouldn’t change anything.”