Dashon Johnson: An Opponent No Longer 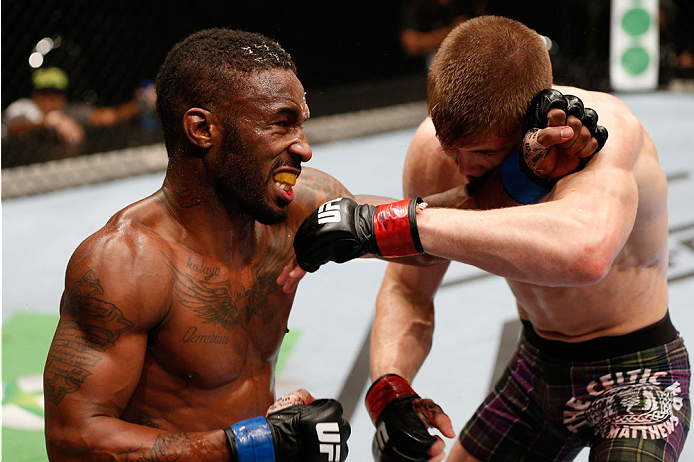 Dashon Johnson normally fights at featherweight, but when the UFC called earlier this year to see if he was interested in a lightweight bout against Jake Matthews, the Fontana, California native jumped at the opportunity.

“The UFC calls, you have to take the fight,” Johnson said.

That response is mimicked by every fighter who has received interest from the biggest promotion in mixed martial arts, and that will likely be the case for as long as those three letters grace Octagons around the world. But where Johnson differs from the rest is that in his combat sports lifetime, it may be safe to assume that he’s said yes to every fight offered to him.

Before he entered the Octagon in June to face Australia’s Matthews in Auclkland, New Zealand and put his 9-0 MMA record on the line, most of his fighting experience came in the boxing ring, where he compiled a 15-15-3 pro slate. It’s not a pretty record or a glossy one, but it’s one he earned in the toughest way possible – as an opponent.

Of course no one starts in the business with the goal of being the B-side. Everyone has dreams of championships, big fights, and even bigger paychecks. Johnson, who turned pro in 2008 and built a decent 11-2-4 record to start his career, was no different.

But when his trainer / manager moved to Oregon, Johnson, then living in Escondido, California, was basically on his own and calling his own shots.

“That was pretty much how I was making a living, so I was getting these calls and it was either fight or don’t get paid at all,” said the natural welterweight. “I was fighting middleweights and super middleweights and getting calls on two days’ notice or a week at the most, but I was taking these fights.”

And losing most, but even though he dropped bouts to top unbeaten prospects Dominic Wade, Jermell Charlo, Julian Williams, and Glen Tapia, as well as contenders like Joshua Clottey, on the right night Johnson could capture lightning in a bottle and beat the highly-touted Craig McEwan or 11-0 Adam Trupish.

A .500 record in boxing wasn’t going to get him anywhere though. He knew it, and the boxing establishment knew it.

“If you’re in that blue corner, you’re pretty much not going to win,” he said. “You’re already down three rounds going into the fight.”

Enter MMA, and the opportunity to get a fresh start. The sport wasn’t completely foreign to Johnson, who had wrestled growing up, so he was able to move into the new realm fairly quickly, turning pro in 2012 with a 21 second TKO of Tommy Franklin. And as the losses piled up in boxing, the wins in MMA were coming just as fast, and his loyalties began to shift.

“When I first started catching a few losses (in boxing), I was already transitioning to MMA because it was just something I wanted to do for a long time.”

By the time Johnson had made it to 9-0 in MMA, the UFC came calling, and even though he was a newcomer facing another newcomer on the undercard of the show in Auckland, he saw a difference immediately when he arrived on fight week.

You may wonder why that affects a fighter, but as the 26-year-old Johnson points out, being appreciated for your work and your sacrifice to do that work is something we all crave at some level. To be called names on social media or dismissed as an afterthought can wear on you after a while. In MMA, Johnson knows that fans can be just as cruel at times, but for the most part, they’re going to judge you on your performances, not the perception of who you are as a fighter.

“To me, the MMA fans are a lot more diehard,” Johnson said. “They give you a lot more love, and when I started getting a couple wins, I started getting a huge following in my hometown, and I was getting Tweets from around the world and messages on Facebook, and it’s a good feeling. It makes you want to go out and perform, and I knew that’s where I wanted to be. At the same time, going into MMA I knew that most guys wouldn’t have the experience I had in boxing and wouldn’t be able to match my level as far as fists and stuff like that. I knew when I started transferring over that I was going to have a fresh start and I was going to be able to make a name for myself.”

To complete that fresh start, Johnson put his money together and relocated to Las Vegas, and while you couldn’t see the benefits of the move in the Matthews fight, where he was submitted in the third round, with a new team at Xtreme Couture and a move back down to featherweight, Johnson is ready to show what he can do this Saturday in Brasilia, Brazil against Godofredo Pepey.

“Now I’m able to get my career where it’s supposed to be and actually show my worth,” he said. “And when I walk away from it all, I’ll be able to know I did it to the fullest and wasn’t a victim of circumstances.”

Walking away is far off at the moment, yet with his new beginning comes a familiar scene – being the bad guy in an opponent’s hometown. But you have to assume that being booed by Brazilian fans won’t be an issue after all he’s seen.

“No sir,” Johnson laughs. “I’ve been thrown to the wolves and I’m still here and still standing.”

And fighting, though not in the boxing ring anymore.

“I’ve hung it up,” he said of his boxing career. “I’ve gone to bigger and better things.”