Darren Till knows what he was put here to do

Maybe Darren Till just got tired of the weather in Brazil.

“I got tired of the sun and wanted to change it for the rain,” he laughs, referring to his return to his native Liverpool late last year after four years living and training in Brazil. It was a stretch in which he learned Portuguese, became a father and also earned a spot in the UFC after winning 12 consecutive bouts, 11 in Brazil, and eight by knockout.

But home always beckoned, and eventually it was time to make it back to England and to his coach Colin Heron and Team Kaobon.

“Being such a long time away from my family, friends and coaches back here in England, I just wanted to switch up a bit and get back to my striking ways with my coach and my master Colin, and that was mainly the reason, to be totally honest with you.”

And though one would think it would take some adjusting to get back to the British way of life, Till believes he can settle into any situation anywhere. 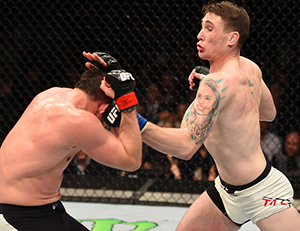 “I've really moved about a lot and I traveled the world a lot, so I've never really considered one place home,” he said. “I consider the world my home. I just adapt to wherever I am. I think the biggest problem was leaving my daughter behind. That was probably my biggest thing. I definitely want to bring my daughter to see my family and see my way of life in England. I'm not with her mother anymore, she's my ex-girlfriend, but we're still on good speaking terms and she'll always have a home with my family, so that's always good to keep the peace.”

At 24 years old, peace is good for the personal life of Mr. Till, especially since there is plenty of war to be waged in his day job, starting with this weekend’s main event against Donald “Cowboy” Cerrone in Gdansk. Heading into 2017, it’s not exactly where Till expected to be spending this Saturday night, but a pair of wins over Jessin Ayari and Bojan Velickovic turned a rebuilding year after a 19-month layoff into a year in which he makes his move into the welterweight top 10.

“I just wanted to get back and prove that I'm one of the best fighters in the world, and that was the first step to it all, obviously getting my first fight in,” he said of his New Year’s resolution. “I would never have thought in 2017 that I'd be main event against such a top guy like Donald Cerrone. I knew it was gonna come and I knew I was gonna be a top ten fighter and a titleholder, but 2017 was supposed to be about getting back on track. Obviously, I've done it in quick time. I just beat two top competitors in Europe and now I'm moving on to the American scene, fighting one of the best fighters who's ever lived in Donald Cerrone. So, for me, 2017 was planned, but it went a hundred percent better than planned.”

But is it a bridge too far for Till at this point? Some believe the No. 6-ranked Cerrone has too much world-class experience for the Brit, who enters the fight with a 15-0-1 record. But as the saying goes, “Who dares wins,” and Till is daring to be great, a destiny he saw as his from his first days in the gym.

RELATED: On The Fly - Darren Till | Cerrone - Till Needs A Reality Check | Watch Fight Night Gdansk Exclusively On FIGHT PASS

“I want to be totally honest,” he said. “I think from my first early days of sparring and my first amateur fights in Muay Thai, I just knew I wasn't like the rest and I knew that my fighting brain and my fighting IQ was special. I was always very confident as a kid. Nothing could bring me down. Getting beat up in sparring by the older guys or anything like that, nothing ever got to me. I definitely think that from when I was a kid I thought I was a special fighter. That is something I truly believe and I've known it for years now.”

On Saturday, he gets his big chance to prove it. Yes, an opportunity like this has raced up to Till, but he’s not an impatient young man. He just believes things happen when they’re meant to, and right now, he’s not only ready for Cerrone, but for everybody. 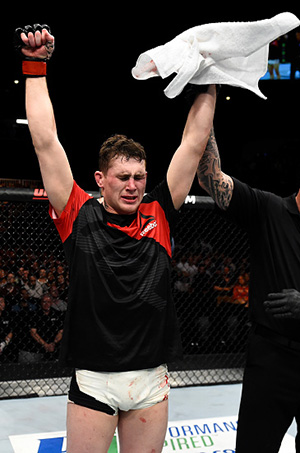 “At the end of the day, not just in fighting, but in life, no road worth going down is ever gonna be easy,” he said. “It's a long path, and it's hard and there's sacrifices to be made, and there are setbacks and you can never think that you're just gonna jump in the UFC and just get a shot or get a top ten fighter or get a guy like Cerrone. You've got to work hard, you've gotta believe in yourself and you've got to beat people to get there. Basically, that's what I've done. I'm unbeaten and people can say anything they want about me, but if you put anyone in front of me - it can be a welterweight, it can be a middleweight, a light heavyweight, I don't care. I'll go in there and I'll beat them. So talk about my record all you want, but every time I go in that Octagon, I am very, very confident that I will beat anyone put in front of me. And that is a true belief I have in myself.”

He’s not kidding either. You can hear the doubt in some fighters’ boasts. Not in Till’s.

“I fight guys and I can just see already that they're not on my level,” he said. “I don't know where it comes from. I just don't know. But I do know that I truly believe in my potential and myself a hundred percent. I believe now that you can put me in front of the heavyweight champion and I will go in there believing I can beat him. And you can't buy that. People can knock me for it, and people try to knock Conor McGregor for it, but look what that guy's done, and I'm a guy like that. I believe in my potential a hundred percent.”

It almost sounds like Darren Till is having too much fun with all this. He laughs.

“That's accurate. The buildup is great, the s**t talking, the weight cutting. It's all good and the same parts that we don't like to do are horrible. But once I step in that Octagon and I land the first punch and I get hit myself, it feels like home. This is what I was put on the planet to do, so I enjoy every five minutes of that round. That is my drug. I don't need to take drugs or anything like that. My drug is in the Octagon, and that is me speaking a hundred percent truth.”