Darren Till: Here to Stay 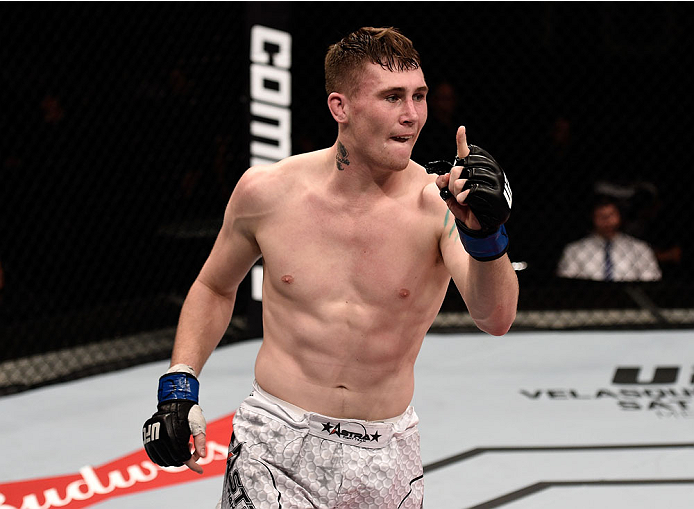 Fighting didn’t save Darren Till’s life, but the unbeaten welterweight prospect is well aware that his daily existence might have looked quite different if he hadn’t packed his bags and moved to Brazil, far from the distractions of home back in Liverpool, England.

“I would say that if I didn’t come to Brazil and didn’t fight, I would be in a pretty s**tty situation right now,” Till said. “I’m not gonna say I’d be dead or I’d be in jail, but I’d be in a different kind of situation in different circumstances, and maybe those circumstances wouldn’t be so good for me. So I’m really happy that I fight. I appreciate it, it’s done me a lot of good in my life.”

Despite being only 22 years old, Till can make a statement like that because he’s done a lot of living in a short time. These days, he’s a member of the UFC roster preparing for a Saturday bout in Dublin against fellow unbeaten Nicolas Dalby, a proud father of a daughter, and the rarest of rarities – a Brit who is fluent in Portuguese.

Till, who makes his home in Balneario Camboriu, Santa Catarina, will have spent three years in Brazil this December. It was supposed to be a six-month trip to get him out of Liverpool and focused on his budding career as a prizefighter.

“I got myself into a lot of trouble back in Liverpool,” Till recalls. “At one point I got stabbed in the back twice at a party in a nightclub, all the time fighting in nightclubs and doing bulls**t, and I came to the decision with my coach Colin (Heron) that it would be best to move to Brazil for six months to stay with Marcelo (Brigadeiro). Obviously, Marcelo’s considered one of the top ground coaches in the world, so I’d be learning a good ground game with him, and as soon as I got here and I seen the city…”

Till didn’t need to say anything more than that. He had found a place he could call his own, away from the craziness, away from the distractions, away from everything that was going to keep him away from what his coaches believed was his destiny – to be one of the best mixed martial artists in the world.

“It was really peaceful for me,” he said. “I was alone and I could just focus on one thing. Then on the fourth month of me being here, my girlfriend told me she was pregnant, and it sort of all came together and I decided to live here. If I wouldn’t have done this, I don’t think I’d be in the UFC today, so every choice I’ve made, it’s all come down to this choice right now.”

For such a young man, Till has an intense focus on what he’s doing to support himself and his family. That was evident in his UFC debut in May, a punishing second round knockout of Wendell Oliveira. It was a performance that dropped jaws around the MMA world, and the fact that he did it on less than two weeks’ notice made it that more impressive.

“It all came so quickly,” he said. “I got the call ten days before, so I didn’t have time to be nervous, I didn’t have time to think about my opponent. The only thing to do was cut weight and fight, so it was a good thing to have so much pressure, but anytime I fight anyway, I don’t really take a lot of emotion in. I always try to stay really cold-blooded. I focus on the job and I’m a very confident individual. I believe a hundred percent in myself, and I believe everything that I do is always going to go toward the better of me, so any obstacle, I always come out on top.”

From most mouths, that kind of confidence is mere bravado. From Till, it’s the voice of someone who has had to feel that way about himself to succeed. Otherwise, he could have become just another casualty. And along the way, that confidence matured him.

“Growing up I was a very independent person,” he said. “I left home at 15 years of age to pursue my career and my dreams. It’s a rough road, and I’ve had a lot of fights and I’ve got a lot of experience. I’ve lived on the street, I’ve had money, I’ve had no money, I’ve had food, I’ve had no food, and what life’s thrown at me has matured me a lot at a young age. And I’d say the experience of fighting has really matured me because I’ve traveled all over the world fighting. Obviously moving to Brazil at such a young age and creating a family, that’s matured me even more. So every obstacle in my life up until this point has really made me the man I am today.”

That man is a dangerous one in a dangerous division, a combination that will undoubtedly make for great matchups over the coming years, with Saturday’s fight against Denmark’s Dalby, a fighter with an equally intriguing upside, just the first. Till isn’t really interested in Fight of the Night bonuses though.

“Every time I fight, people can expect a show because what I do, a lot of people can’t do,” Till, owner of nine knockouts among his 13 pro wins, said. “I go for the kill all the time, so anytime I’m fighting, it’s gonna be a knockout or some kind of show. In my first (UFC) fight I got to show a part of my game, I got to show some talent, and I showed the people that I’m no joke and a very mature person for only 22 years of age. I was happy with my debut, but I want even more this time.”

And even more than that after Saturday night. For Till, all that matters is being the top fighter in the world, and he’s willing to make any sacrifice to get there.

“Any obstacle that’s thrown to me in life, I’m just gonna take it as it comes and use it to make myself stronger, because I’ve got one goal and that’s just to be the best,” he said. “It’s not about money, it’s not about fame, because when you’re the best, fame and money come with it so you don’t have to worry about those two things.”

Does he see the finish line yet?

“No way,” Till said. “I’ve got a long road ahead of me still. Even before getting to the UFC, it was a hard road. It was difficult, but I always knew that when I would get to the UFC, it would get even more difficult. I didn’t prepare myself to get here and take my foot off the accelerator.”

So it’s full speed ahead for Mr. Till?