Darren Elkins: Under the Radar No Longer

"I got a finish, it felt good, and it lifted some of that weight off of my shoulders." - Darren Elkins 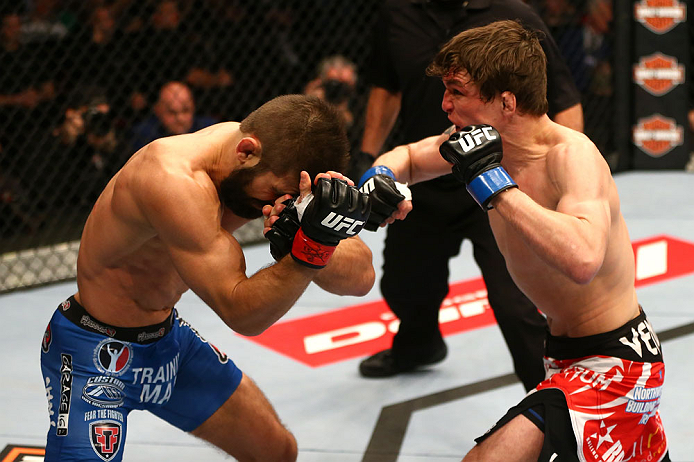 After five consecutive wins at featherweight, some healthy buzz thanks to a first round finish of Antonio Carvalho at UFC 158 last month, and overdue recognition as a legit 145-pound contender, Darren Elkins wanted to keep the party going.

No, not that kind of party, the one where you finish a fight, get out of shape and overweight, and consider the gym a distant memory until the next training camp a few months down the line. For Elkins, his goal is to strike while the iron’s hot, so when Clay Guida was forced out of his UFC on FOX 7 bout against Chad Mendes this Saturday, Elkins was only too eager to step up to the plate.

“I came out healthy (against Carvalho), it was kind of a quick fight, and it was a great opportunity to fight one of the top ranked guys in the featherweight division,” he said. “So when they asked me, I sat down, I thought about it, and it made sense to me.”

It makes sense to everyone else too, simply because a win over a former world title challenger like Mendes will do even more for Elkins’ growing profile among UFC fans, something that started in earnest with the win over Carvalho.

“I do feel like people are starting to pay attention more and more,” he said. “Each fight the streak’s a little bit longer, and in the last fight I finally got a finish, and that helped a lot, so I feel like I’m starting to make my rise now.”

1-1 in the Octagon, with an injury-induced stoppage of Duane Ludwig and a submission loss to Charles Oliveira, both in 2010, Elkins decided – like many of his lightweight peers – that a trip south to the UFC’s new featherweight division would be the key to unlocking his potential. That decision hasn’t worked out too well for many of those making the ten pound drop, but it has for the 28-year-old from Portage, Indiana.

“I think there are a couple things,” said Elkins of his success at 145. “One is that I’m more athletic in this weight class, it’s more of a natural weight, and I’m stronger than almost everybody I fight. The other part is that in the beginning when I fought in the UFC I was working full-time. I was doing 40 to 60 hours, and now that I’m a journeyman, I can take time off and all I do is fight now. It makes a difference when you’re trying to train around a job. Now this is all I do. I get to train two and sometimes three times as much, and it really makes huge improvements in my camp, and it’s really paying off.”

At featherweight, Elkins has scored wins over Michihiro Omigawa, Tiequan Zhang, Diego Brandao, and Steven Siler. The only problem? All four wins were by decision. In victory number five though, that all changed as he halted Carvalho via strikes at 3:06 of the first round.

“The last couple fights I’ve been really trying to work on getting a finish, and in training camp I was working on my power and my striking and my submissions and my ground game, so it felt good when it finally paid off and I got one,” he said. “I got a finish, it felt good, and it lifted some of that weight off of my shoulders.”

Now all he has to deal with Mendes, a tough task any way you slice it. The Team Alpha Male standout has won two fights by knockout since his lone pro MMA loss to featherweight champ Jose Aldo, and a win will keep him on track for a second title fight. Elkins has no problem playing spoiler though.

If that person is Darren Elkins, that would be six straight wins in one of the sport’s toughest divisions. You can figure out what should come next.

“I stepped up and took a last minute fight against Chad Mendes when most people won’t take that fight,” said Elkins, “and if I win that fight, I’ll be at six in a row at 145, so I figure yeah, that’s what I deserve, a title shot.”