Darren Elkins Has His Priorities Straight

"I had to build more of a winning streak because I wasn’t flashy, but
when you win a lot of fights, people start respecting you a lot more." - Darren Elkins 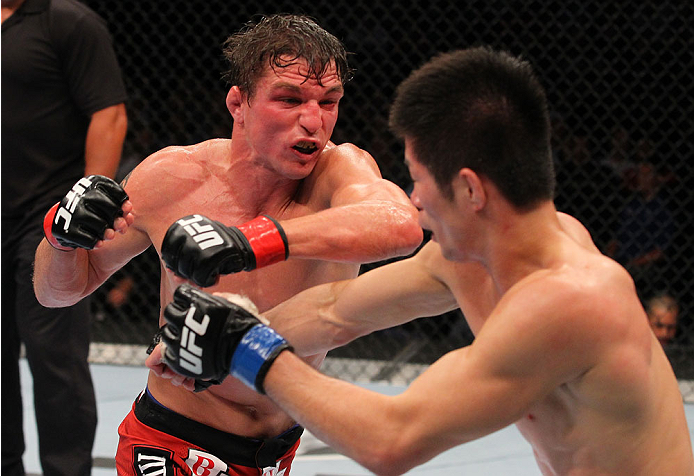 Featherweight contender Darren Elkins is like most of us when it comes to mixed martial arts. If there’s a spinning back kick knockout or a submission with the word ‘flying’ in it, he’s there.

“I enjoy them and I’m a big fan,” said Elkins of the spectacular finishes that fill UFC highlight reels. “It’s hard not to be.”

But while the Indiana native can appreciate the skill that goes into producing one of those moves, he makes it very clear that you’re not likely to see him mimicking them anytime soon, if ever. And that’s okay, because the former college wrestler has turned his brand of no nonsense, blue collar fighting into seven UFC wins, including six in his last seven bouts. Such a run of success has put him in the top ten at 145 pounds and in a prime main card slot against Jeremy Stephens on this Saturday’s FOX card in Chicago. But if you think he’s gone Hollywood, wife Connie is there to step in.

“My wife reminds me all the time and she definitely keeps me grounded,” he laughs. “So as soon as I start talking myself up a little bit, she’ll put me right back in my place.”

Not that you would expect such behavior from Elkins, who is as far from a spotlight-seeking pro athlete as you will find. There are no Ferraris in the driveway, no entourage hanging on his every word. And while he admits that life has changed since his Octagon debut in 2010, it hasn’t changed who he is.

“People are starting to notice me more, I’m starting to get a bigger name, obviously I had that win streak going on, and the more you win, the more money you make, so I’m starting to make more money fighting,” he said. “When I first started out I used to be more of a pipefitter and then fight, and now I’m mostly a fighter and I pipefit some.”

Yes, he still works as a member of Local 597, keeping his union gig and doing pipefitting work when he’s between fights. Is it a grueling grind at times? Of course, but Elkins has never been afraid of hard work, and the way he sees it, the harder he works now, the easier he’ll make life for Connie and their two kids.

“I hope this lasts for a long time and I hope I make a ton of money doing this,” he said. “But if I don’t, and something does happen, I’ve got something to fall back on. My life is going to still be secure anyway. Between me and my wife, we’re good with money and planning our future. I’m not thinking just in the moment; I’m thinking of when my kids are older, and when they have to go to college I can still provide for them.”

That’s a man with his priorities straight, and that goes back to his fighting style as well. Yeah, flash is nice sometimes, but often it’s steady that pays the bills and gets the job done. And as the years have gone by, more and more fans have come to appreciate what Elkins does in the Octagon.

“I’m not the most flashy fighter,” he said. “I consider myself well-rounded, but I’m not going to do the most flashy kicks or hit flashy submissions like most people. But my overall skills are high-level, I’ve just combined everything, and most people are on board with it nowadays. They enjoy the fight, the pace of the fight, and I’m having more and more people come around.”

It wasn’t always that way for the 29-year-old, but wins have a funny way of bringing fans around to your side.

“I think for a while I’ve been under-appreciated,” said Elkins. “I come from a little Indiana town and I’m not training at the big gym and not finishing all my fights and doing these flashy things. So yeah, that hurt me for a little while. I had to build more of a winning streak because I wasn’t flashy, but when you win a lot of fights, people start respecting you a lot more.”

And perhaps even more than his winning streak, people respect his attitude, and that was never more evident than when he took a fight with Chad Mendes last April, only a month following his previous bout with Antonio Carvalho. Elkins got stopped in the first round by Mendes, snapping his five fight winning streak, but he says he would do it all over again if asked.

“I don’t look at it like I shouldn’t have taken the Mendes fight,” he said. “Let’s face it, he’s the number one contender, he’s got all these wins right now, he’s only lost to (champion Jose) Aldo, and if I win that fight, I just beat the number one contender and that puts me right where my goal is, which is to be the champion. That was the fast track, and it was a fight a lot of people were turning down, but that was the fight I was waiting for. I wish I had more time, I wish a lot of different things; I wish I didn’t get knocked out that fast. But you’ve got to take advantage of the opportunities because that’s when great things happen in life. So I was glad to take the opportunity and I’d still do it.”

Saturday is the next opportunity, a nationally televised fight with Stephens that will put him in everyone’s living room. If he wins there, that number ten ranking will undoubtedly transform into a higher one, and after that, well, you know what Elkins is shooting for.

“I want to make a run for the title,” he said. “It starts with this fight and an impressive win, and I’m looking to get a great win streak and I hoping it leads me to the title this year.”