Darren Elkins: "Grimy Fights Are The Way I Win"

It used to be a running joke in boxing circles that some fighters were so prone to cuts that they started bleeding during their walk to the ring.

“I never really had any broken bones or major injuries outside of a little bit of knee stuff,” said the Indiana native. “But cuts are my one weakness.”

Some would say they’re his strength, because once “The Damage” sees crimson, his opponents need to start worrying.

“It's time to turn it up once I start bleeding, I guess,” he laughs.

And turn it up he has in his last two bouts, as he snapped a four-fight losing streak with finishes of Eduardo Garagorri and Darrick Minner. Along the way, he’s reinforced his standing as the UFC’s resident cult hero, a must-see for diehard fans who know that he’s going to bring it every night. It’s a surprising development for the humble Elkins, who isn’t interested in the trappings of fame. He’s just a family man who likes to fight.

“I didn't think it was gonna be like this, but it is what it is,” he said. “The way I fight and the style I have, it's an entertaining style, but these grimy fights are the way that I win, so I'm not afraid to get in there and mix it up like I have been.”

That means Elkins is a specialist in producing the equivalent of the home run in the bottom of the ninth or the last second buzzer beater. Get him down on the scorecards or bloody him up, he just fights harder. And while his come-from-behind wins are the stuff of legend by now, there has to be some moment in some fight where he’s doubting himself, right?

“I don't have doubts,” he said. “I have a sense of urgency once in a while, like I gotta get going now. But I know that my pace and my cardio is really good and I can change a fight in a moment if I keep the pace up. So I know I can't stop scrambling, I can't stop working, I can't stop putting the pressure on a guy. As far as mentally, I know that I can get through it. I know how mentally strong I am. When I go do my mental training, it's like, okay, I know I'm gonna probably be bleeding, I'm gonna probably get some kind of cut, and I just need to focus and not worry about it and just keep on doing me.”

It’s been a good run for the 37-year-old, who will make the walk to the Octagon for the 25th time this Saturday against fellow veteran Cub Swanson. It’s a fight that remarkably never happened before, despite the pair’s longevity in the promotion and their reputation for fighting all comers at 145 pounds.

“I just think it's crazy that after all these years we're fighting this late in our careers,” said Elkins. “This is a fight I've always seen happening, I think we've been close to fighting each other a couple times, but it just never happened. Now we're here and we're finally making this happen.”

And if Elkins makes it three straight by beating “Killer Cub,” he will likely return to the featherweight rankings to begin 2022, and from there, who knows what’s next for one of the division’s most respected competitors. Elkins doesn’t know, either, but he doesn’t really think about matters such as title shots anymore. 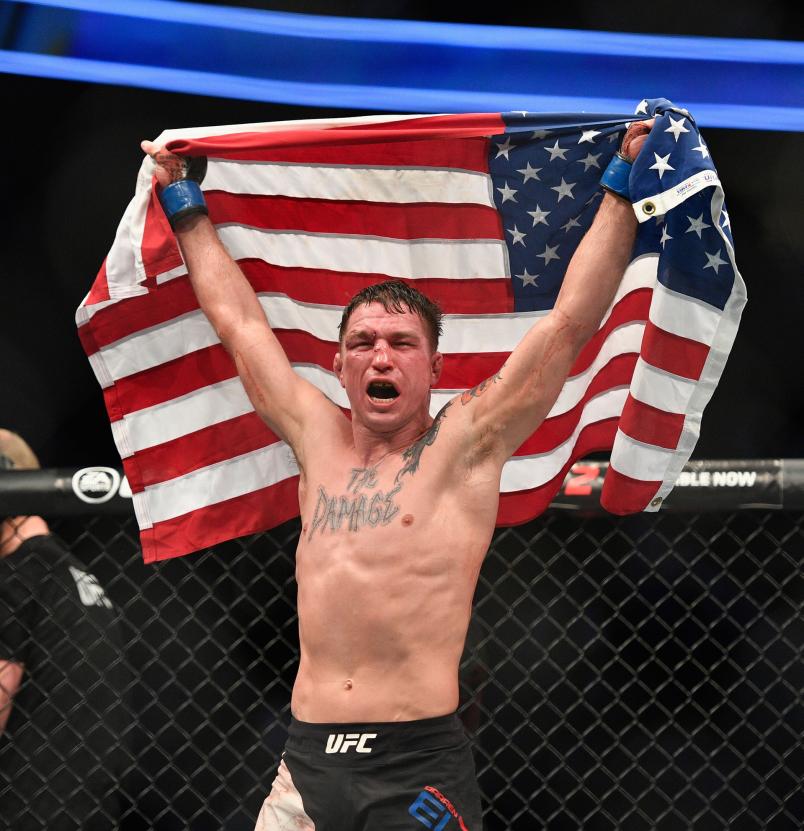 Darren Elkins reacts to his victory over Mirsad Bektic at UFC 209 on March 4, 2017 in Las Vegas, NV (Photo by Jeff Bottari/Zuffa LLC)

“I'm in a different mind frame right now,” he admits. “Things like that are still not all the way gone for me, but I want to make sure I'm having fun in these later fights. This is probably the last chapter of my story, so I put pressure on myself a while back and I just want to have as much fun as I can. Let's just have fun, we're gonna take one fight at a time, I want to put on performances that I'm satisfied with and make sure I'm getting better as a fighter. I do believe that even late in my career I'm getting better as a fighter, so I'm more focused on that right now than going after a title or getting back in the Top 15. I'm just taking one fight at a time and I'll reevaluate my career after every fight now.”

I remind Elkins of Michael Bisping and how he put together a stellar career but wasn’t likely to get a title shot at 37, only to see him jump in as a short-notice replacement, beat Luke Rockhold, and win the UFC middleweight title. Could this be a realistic scenario for the veteran featherweight?

“I fought a lot of guys in the division,” said Elkins. “So it's one of those things where it's like, hey, if I put on some good fights like I have been, put on some good shows, there’s one thing about my wins I've been doing too is I've been finishing fights instead of just winning by decision, so I think that makes me more exciting. I think I can turn the corner any moment, but I'm just staying focused on one fight at a time, and if it happens, let's do it. That would be the dream, the perfect ending to the story.”