Darren Elkins gets Back to the Grind 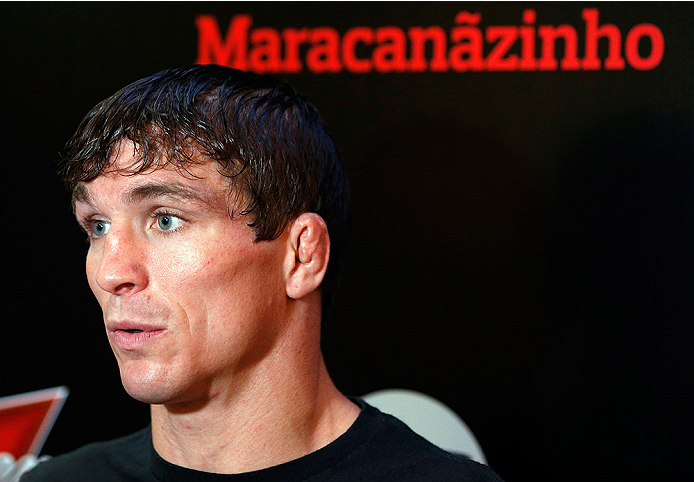 In a sport where fighters are often described as dynamic or members of the new breed of mixed martial artist, Darren Elkins remains a throwback. That doesn’t mean he can’t handle himself wherever a fight happens to go, because no one earns seven UFC wins being one-dimensional. But at his core, the Portage, Indiana native is wrestler whose sole goal on fight night is to win, and the way he does that is by making his opponent miserable for 15 minutes or less.

There are no spinning back kick finishes or flying armbar submissions on Elkins’ record, but there are plenty of quality fighters who just couldn’t keep up with “The Damage” for three rounds.

But when you train and fight like Elkins does, eventually your body intervenes and lets you know that it’s time to take a break, even when you don’t want to. So after a grueling three-round decision loss to Jeremy Stephens in January, Elkins took a needed break, not just to heal his body, but to refresh his fighting spirit.

“I had those crazy back-to-back-to-back fights, which was fine, but it started taking a toll on my body,” Elkins – who fought Antonio Carvalho, Chad Mendes, and Hatsu Hioki within five months in 2013. “I had some injuries and my ribs were kind of beat up. I got a stinger in my neck that I wanted to heal up as well, so there were a lot of nagging injuries and I was just trying to get healthy again.”

To keep Elkins out of the Octagon for an extended period of time, the injuries had to be bad, but the Local 597 pipefitter didn’t stay idle during his time off. When able, he would be in the gym, working around his healing injuries, and more importantly, he finally had an extended period of time to reconnect with a family that didn’t get to see him much while he went through training camp after training camp. And in the process, he disconnected from the fight game.

“I was training all the time, and even when I was hurt I was working on stuff, but it was at a pace that wasn’t grinding and beating up your body,” he said. “It was just going as hard as I can, putting in good days of work, and that’s it, nothing beyond that. I shut off for a while, didn’t watch fighting, and I took a break and enjoyed my family. I’ve got two younger kids, and when I was doing everything I get so busy that I didn’t get to enjoy my time with them, so I did a lot of things with my family and I really enjoyed that.”

The break was good for everyone, from Elkins and his wife, to their seven-year-old daughter and four-year-old son. And when his body got back to normal and he started to get that itch to fight again, it was with a renewed passion for the game.

“I think it was really important (to get away),” he said. “It’s one of those things where you go through the grind and you grind over and over again and you forget about the little things. And when you take a little time off, you find what you enjoy again. It’s not just being a job, and I enjoyed it again. I had no pressure, and the main thing was just getting better and having fun with fighting again. Now I feel better than ever. My body feels strong, my mind is strong, I’ve found that motivation again and it was nice to take a break and miss the game.”

He missed a lot in terms of the featherweight division. Jose Aldo still rules the roost, but below the champion, Chad Mendes is getting ready for his rematch with Aldo this week, Conor McGregor emerged as a star, young gun Dennis Bermudez keeps winning, and veterans Cub Swanson and Frankie Edgar are knocking on the door for a shot at the belt. Elkins has been doing his homework though.

“I started to pay attention to the division again,” he said. “I would say the last couple months I’ve been back, paying attention, watching who’s who and kind of seeing who they’re going to give me. The division has changed a lot since I fought last.”

One thing hasn’t changed, and that’s that every fight at 145 is a tough one. Elkins’ UFC 179 date this Saturday is no different, as he will take on Brazilian standout Lucas Martins in Rio de Janeiro. And yeah, Elkins is a heckuva nice guy, but that’s not going to stop the Brazilian fans from screaming for his head, in a patriotic, not literal, way of course.

“Mentally I’ve put myself in those positions,” he said. “Obviously it’s going to be different, but luckily with most of them I’m not even going to be able to understand what they’re saying, so that’s going to help. (Laughs) And I don’t know what it is, but I like the negative energy better than the positive energy most of the time. I like to be the guy that performs under pressure when everybody else wants me to lose. That’s when I think I’m the best.”

As of earlier this week, oddsmakers see Elkins as a slight favorite, and a lot of that likely has to do not just with the American’s greater level of UFC experience, but the style that can smother a striker in the time it takes you to say “double leg takedown.”

“He has good stand-up,” Elkins said of Martins. “He has that one-shot, put you to sleep power. He puts a lot of people away and he does it a lot of times in the later rounds, and most people don’t keep that power for that long.”

But has he ever faced a wrestler like Elkins?

When you fight Darren Elkins, you’ve been in a fight. Not the kind of fight where you pick up a bonus check at the end of the night, but one where the only thing you’re picking up is an icepack and some Advil. Elkins would probably smile at that description of his fighting style, and while he enjoyed his break earlier this year, he’s not planning on taking one next year because he’s happy to be back on the grind.

“If I stay healthy after this fight, I want to fight frequently,” he said. “I’m hoping three to four times next year. That would be a realistic goal for me if I’m healthy. I want to stay busy. I’m 30 right now, I’m running out of years and I just want to get up there and have fun with this the next few years.”