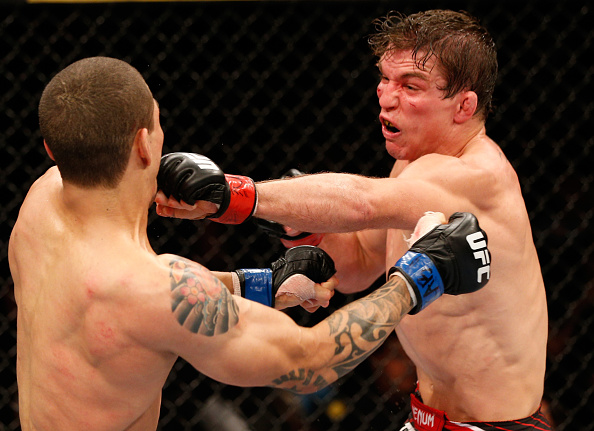 Midwest tough, all the way down to his Local 597 union card as a pipefitter in his native Indiana, Darren Elkins is probably the last person you would expect to join up with “No Shirt Nation,” aka Team Alpha Male, in Sacramento. But after a disappointing loss to Hacran Dias last December, Elkins felt it was time to shake things up a bit.

“I’m at the point right now where I need to evolve my game some and work with some different guys this time,” the featherweight standout said, and after a call to former opponent Chad Mendes, he spent some time preparing for his October 24 bout against Rob Whiteford in northern California.

“I thought Alpha Male was the best fit for me because I’m a wrestler and most of these guys are wrestlers,” he said. “I get along with them, and they’re not going to change my whole style; they’re just going to add on to my style. I got a hold of Mendes and talked to him and he hooked me up, and once I got a fight, I decided I was going to come out here, and here I am.”

The 31-year-old is happy he got to work with Mendes and company, yet if not for his wife Connie, the union may have never taken place.

“I probably wouldn’t be out here if it was only up to me,” Elkins said. “Being a father is what comes first to me, but my wife understands. She’s been with me since high school, she’s been with me through wrestling stages and all that, and she’s been with me my whole athletic career. She’s also an athlete herself. She does triathlons and I think that helps out because she knows where I’m coming from. She definitely wants to see me go after my dreams, and wherever it goes, she goes, but she wants me to be happy with it.”

Admittedly discouraged by the loss to Dias, a defeat that is the fifth in a string in which he’s alternated wins and losses. Before that stretch started with his 2013 loss to Mendes, Elkins ran off five wins in a row, and this is the kind of streak he wants to get back to, beginning with next week’s bout in Dublin. And Connie and the couple’s kids are all in when it comes to doing whatever is necessary to get there.

“It’s very important to me,” he said of his family’s support. “My wife was really pushing me. I was down for a little while after the last loss, and she’s the one that said ‘listen, I know it’s hard, we’ve got the family, but you need to go train with some other people for a little while and get a different look and a different feel.’ It would be really hard without her in my corner through these years. We’ve been through some tough times and she’s always been there to pick me up.”

Times are good these days though. Elkins has a big fight coming up, he’s raised his children properly as Star Wars fans, and while the highlight of the tail end of 2015 is the release of the new Star Wars film, for now, “The Damage” is all about October 24 and showing off some of the new wrinkles in his game. Note this though; Elkins is not about to upend what has gotten him to the show already. That blue collar style will never change.

“I never really thought about changing my style; I’m thinking about adding on to my style, maybe making my striking better, getting more power behind my punches, and not just going for submissions but pulling them off,” he said. “But the grinding style is what got me here. I’m not a great athlete. I’m not one of those guys that can do flips everywhere. I’m not that type of athlete. So I have to take my athletic ability and what my strengths are and use them. I have cardio for days and I can keep going forever. Why would I go against what I’m best at? I’m fine with where I’m at; I’m just trying to make things better with what I’ve got.”