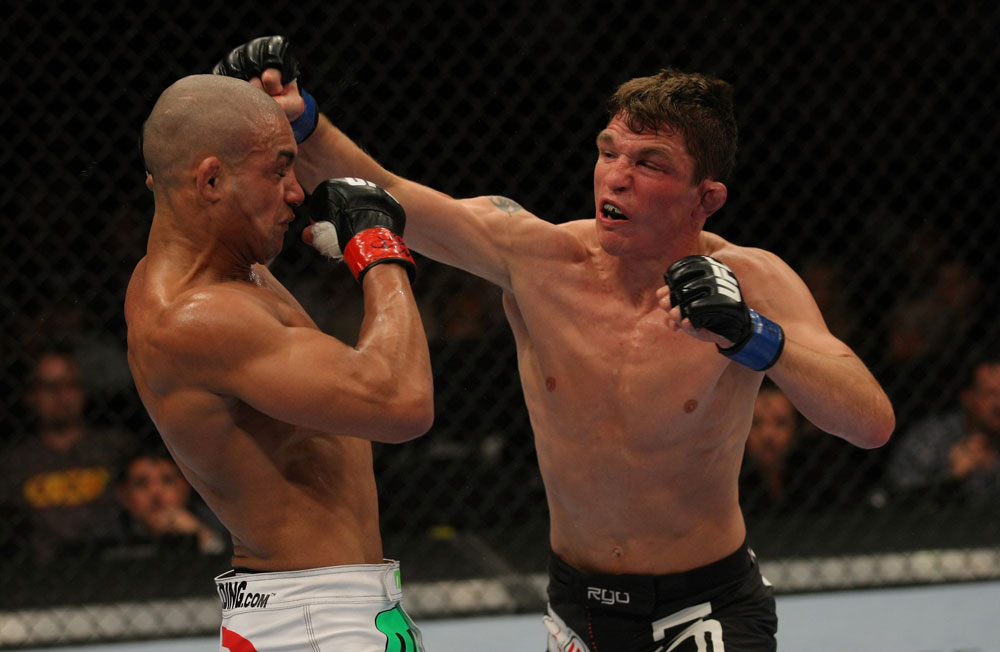 If you’re a fan of the aspects of pro sports that reveal and display character, then you’re probably a fan of UFC featherweight Darren Elkins. And if you’re not, you should be.

No, he will probably never end a fight with a flying armbar or a spinning backfist, but as he’s quietly put together a streak over the last three years in which he’s won six of his last seven bouts, including three in a row in the 145-pound weight class, he’s done the little things that don’t show up on highlight reels, but that win fights.

“You keep fighting for the little stuff, fight for every inch, and don’t panic,” said Elkins of his attitude in the Octagon. “If you’re in there saying ‘oh man, I’m getting my butt kicked,’ it’s going to wear mentally on you and maybe you’ll give up a little easier. But if you keep focused on saying that you can still win the fight, you win little fights, and in an instant the fight can change. And that’s what I wait for. I keep pushing hard, trying to change my fortune.”

His fortunes have changed ever since moving from lightweight to featherweight in 2011. Successful throughout his career on the local circuit at 155 pounds, where he compiled a 10-1 record, he decided after beating UFC vet Gideon Ray in 2009 that he was ready for a change.

“When I first got into the gym, I was a little bit heavier and ’55 was a good fit for me,” said Elkins, who trains out of the Duneland Vale Tudo school in Indiana. “But after training for a while, I started losing some muscle and naturally losing some weight and I felt like 145 would be a pretty easy cut, but right around then is when the UFC called me.”

Looking for someone to replace Spencer Fisher against striking technician Duane “Bang” Ludwig in March of 2010, the UFC rang up Elkins, who wasn’t going to turn down that offer, even if it was at 155.

“I had success at 155, they didn’t have 145 in the UFC at the time, and the UFC was always my dream, so I just decided to go at ’55 and go from there,” he recalled, and it was a good decision, as he won in the first round after a freak leg injury while being taken down forced Ludwig out of the fight.  Elkins’ next trip to the Octagon didn’t go so well, as he was submitted by Charles Oliveira five months later. But when it was announced that the UFC was bringing in the featherweights and bantamweights from the WEC, Elkins had the opening he needed to drop 10 pounds and continue his career in the promotion.

“When they added 145, I thought it was time to actually make that jump,” he said. “I like being bigger and stronger than most of my opponents, so I think I would have dropped to 145. It’s more of a natural fit for me because the ‘55 pounders are getting bigger and bigger, and with me not carrying the extra weight, my cardio’s better, my conditioning’s better, and I think it helps with my flexibility too.”

Since then, Elkins has gone three for three in his new division, turning back Michihiro Omigawa, Tiequan Zhang, and Diego Brandao. And though his Saturday fight with Steven Siler (who has an impressive three fight winning streak as well) sits on the preliminary portion of the UFC 154 card, diehard fans are looking forward to the bout and seeing who emerges with the victory.

The winner is also likely to get propelled into a much loftier position both in the rankings and in card placement, both of which are just fine with Elkins, even if he’s staying focused on what he can control, not what he can’t.

“I’m under the radar and I definitely want to get in bigger fights and be on the main card, but I just take one fight at a time, focus on that, and I think each fight I win I’m moving myself a little bit closer, and that’s all I can really focus on,” he said. “The other stuff is not really anything I can control as much, so I just focus on fighting my fights and trying to go out there and win.”

It’s the attitude that led him to 191 wins in 200 high school wrestling matches and two years at Division II University of Wisconsin-Parkside. When it was over, he picked up the family business as a union pipefitter, assuming his athletic career was done.

“I think for most wrestlers, college is the end,” said the Portage, Indiana native. “The alternative is coaching. A lot of people become coaches after their wrestling careers, and that’s the closest to being competitive that they used to have before mixed martial arts came around. After college, if they’re not going to the Olympics, which is a chosen few, then coaching’s the other option, and it’s not the same as competing for yourself. And I was thinking of getting an education and maybe becoming a coach, and then MMA came around for me and I decided that I still wanted to compete and not coach.”

Turning pro in 2007, Elkins has taken his blue collar background and attitude into the Octagon with him every time out. And he’s proud to admit it.

“I’m definitely blue collar to the bone,” he said. “My whole family’s pipefitters, and I come from a hard-working family where everything that we get, we earn, and you get out of the work what you put into it. We’re not going out there to showboat or tell everybody how good we are – we’ll go out there and prove how good we are.”

He’ll do it again this Saturday.

“An advantage for me is the mental toughness,” said Elkins. “You go through that grind, you train for everything, and you can’t always be winning every second of the fight, but you’ve got to find a way to win no matter what, and that’s the ‘never give up’ attitude I’ve had in my life, and it usually pays off for me.”