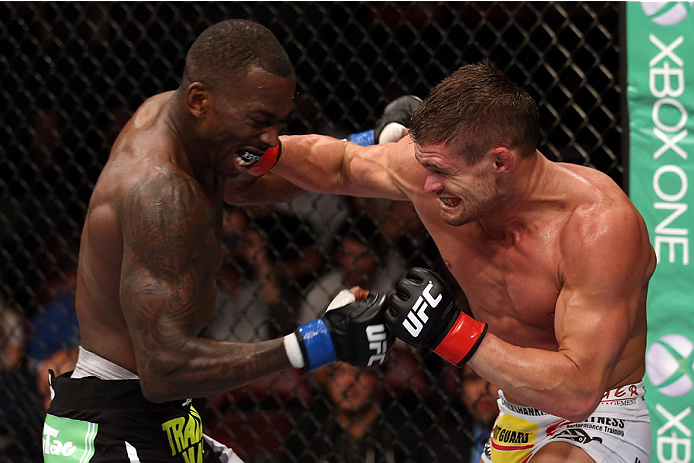 Friday night will mark the fifth time this year Daron Cruickshank has fought inside the Octagon.

Thus far, “The Detroit Superstar” has compiled two TKO wins stemming from gorgeous head kicks against Mike Rio and Erik Koch, a tough decision loss to Jorge Masvidal and, most recently, a unanimous decision win over Anthony Njokuani in October.

Although fight fans may have seen a lot of him in 2014, Cruickshank believes his best is always yet to come.

“I’m constantly getting better,” Cruickshank asserts. “The fans out there haven’t seen the new me since my last fight. I’m working on all my skills and reactions and all my attributes. I’m constantly learning. You’re always going to see a better and new Cruickshank. You should see a faster and stronger Daron Cruickshank coming into this fight.”

If the UFC faithful haven’t figured it out, the only thing the Michigan native likes doing more than referring to himself in the third person is fighting inside the Octagon.

Since appearing on The Ultimate Fighter 15, Cruickshank has competed nine times in the UFC, compiling a 6-3 record that includes three highlight reel head kick finishes and five knockdowns, which ties him for ninth in UFC lightweight history. At UFC Fight Night: MacDonald vs. Saffiedine, he did go toe-to-toe with the vaunted skills of “The Assassin” in the stand-up, but, more so, Cruickshank dusted off his NCAA Division III wrestling credentials to earn six takedowns on 12 attempts to net 30-27 scorecards in his favor by all three judges.

“Anthony Njokuani was a good matchup for me as far as testing my kickboxing skills against a guy who has more kickboxing experience than I have ever had,” Cruickshank said. “I felt like I definitely came out on top in that fight. I didn’t just strike with him, I pressed for takedowns. That gave me the ability to strike with him because he was always worried about the takedown.”

It’s been a busy year for Cruickshank outside of the Octagon as well, as he opened his own gym: Michigan Top Team. Just outside “The Motor City,” Cruickshank has planted his flag in Dearborn. Previously, Cruickshank wasted hours “chasing workouts” by driving to a series of gyms up and down his home state. Now, he can get all his training in under one roof without having to sacrifice time with his family, friends, his cat named Cat or his dog named Banshee.

“As far as the gym, one of the reasons why I didn’t want to leave Michigan is because I have a great support system,” Cruickshank explains. “Without that support system, I would not be able to take five fights in a year. I wouldn’t be able to train as hard as I do and wouldn’t be able to focus on my goals at hand. Everybody knows my father is my striking coach. I have a great jiu-jitsu club - Detroit Jiu-Jitsu Academy - on the first floor of my building and they beat the crap out of me daily. My partners Jason Fischer and Cody Stamann, when those guys have fights I help them out and when I have a fight they help me out.”

Up next, Cruickshank is headed for a shootout at The Ultimate Fighter 20 Finale against fellow knockout artist KJ Noons. In April, Noons scored a 30- second knockout of Sam Stout in a welterweight bout, which earned the Hawaiian a Performance of the Night bonus. With back-to-back UFC wins, Noons is proving the striking skills that made him star in Strikeforce and EliteXC are still alive and well inside the Octagon.

“I think just like Anthony was, KJ is another great matchup for me and for the fans,” Cruickshank said. “He’s predominantly known as a boxer who is tough and in your face and never backs away. I enjoy fighting people like that. I don’t necessarily enjoy fighting someone who wants to take me down and lay on me. I want to fight a guy who wants to bring it to me, so I can give it back to them. I’m hungry. This guy is going to come after me and he’s going to try and hit me, so I’m going to have to hit him a little harder than he does. It’s a good fight for the fans. They should probably bet some money on me (laughs).”

On paper, this strikers’ duel will be a bonus-getting firefight. Cruickshank owns nine of his 16 career wins by KO and Noons owns nine of his 12 career wins by KO. In the gym, Cruickshank sharpens his wide-array of punishing stand-up techniques like he always has with his father Dean, who began with karate in the early 70s and never stopped studying martial arts. It’s been seven and a half years since Noons was knocked out in competition and The Detroit Superstar believe it’s his task to reacquaint Noons with the sensation.

“Knocking someone out is the best feeling I have ever had,” Cruickshank said. “Everybody has their button. I believe everybody can be knocked out. He’s been knocked out one time on record. It can happen. I’m not counting out that he’s tough, but I know I hit hard. If I hit him hard and in the right spot, he’s going to go down. I think he goes for it and he’s a little reckless. I think that is going to be his downfall in this match. I think he’s going to come in at me with his hands down and kind of moving his head, he’s going to get in my range and I’m going to take his head off.”

Tune-in Friday night on FOX Sports 1 because there are going to be fireworks.