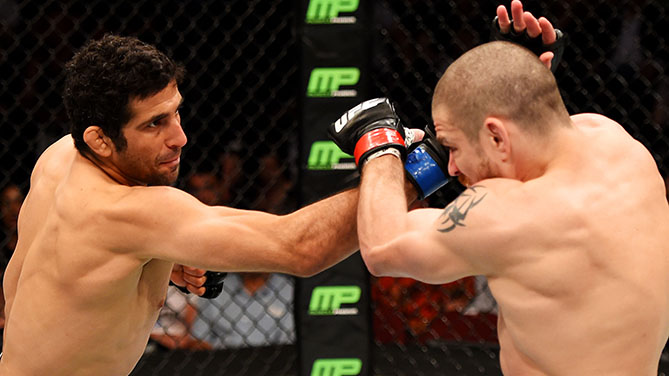 The lightweight division has been one of the most competitive collectives under the UFC banner for the better part of a decade. While there are no easy fights up and down the roster, the upper tier of the 155-pound fold is a veritable shark tank of dangerous finishers and elite-level talent who are all hunting for a shot at the lightweight crown.

As is the case in any shoot ‘em up division, making ground of any sort is an achievement of sizable proportions, but when a fighter manages to work his way up the divisional hierarchy to reach a coveted top 10 ranking, that is something special to behold. And while Beneil Dariush isn’t one to rest on his laurels, he takes pride in the obstacles overcome on his journey thus far.

“I truly believe we are in the biggest and best division in the UFC,” Dariush said. “There is just so much talent. Being able to climb like I have in a division this stacked gives 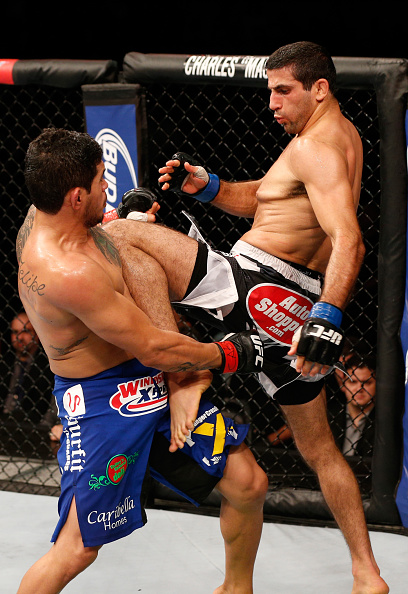 Diego Ferreira of Brazil in their lightweight bout during the UFC 179 event at Maracanazinho on October 25, 2014 in Rio de Janeiro, Brazil. (Photo by Josh Hedges/Zuffa LLC)" align="right" />me a sense of pride. To be able to go through the division and do it as fast as I have is an accomplishment. It just shows all my hard work I’ve put in is proving fruitful.”

While the 26-year-old stumbled in his second fight under the UFC’s promotional banner in what resulted as the only loss of his professional career, “Benny” has bounced back strong to establish himself as one of the fastest rising talents in the lightweight division. The Kings MMA representative has done so by finding victory in each of his past four showings inside the Octagon, with his most recent win easily registering as the biggest of his young career.

The well-rounded lightweight defeated divisional staple Jim Miller via unanimous decision during their tilt at UFC on FOX: Rockhold vs. Machida back in April. Dariush stepped up on short notice to face the gritty New Jersey-born veteran, and outworked the younger half of the fighting Miller brothers to pick up the win on the judges’ scorecards.

Even though Dariush’s efforts weren’t enough to put seasoned scrapper away, besting an opponent with the resume and name recognition Miller possesses proved to be the caliber of opportunity the up-and-coming lightweight envisioned it would be.

“It was a lot of emotions all at once,” Dariush said. “It was a short notice fight and before I could really think about anything a win in the fight could bring me, I needed to get over the nerves. Usually I’ll get nervous for like a week when I start camp for a fight, but I didn’t have the chance to do that against Miller. Once I got the nerves out of the way it was already fight week. That was really different for me, but I kind of liked it. Things all moved very fast and it turned out well for me.

“I had just fought five weeks then went on a little vacation after. Even then I was still in the gym helping my teammates but my diet wasn’t the best. I gained a lot of weight and wasn’t really even thinking about fighting. Then I got the call to fight Miller and took it on two weeks’ notice. There was a lot to do in a really short amount of time, but it was a cool experience for me, and one I’m glad I went through.” 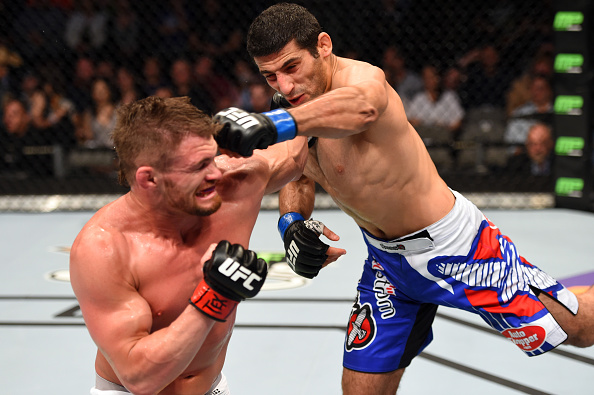 Daron Cruickshank in their lightweight bout during the UFC 185 event at the American Airlines Center on March 14, 2015 in Dallas, TX. (Photo by Josh Hedges/Zuffa LLC)" align="left" />The current nature of the UFC’s hectic schedule enables fighters who stay ready and healthy the ability to move quickly up the rankings by capitalizing on the windows that open up for them. Dariush’s win over Miller was his second successful trip to the Octagon in less than five weeks as he submitted Daron Cruickshank slightly more than a month earlier at UFC 185 in Dallas, Texas.

Following his victory in Newark, Dariush fielded even more opportunities to face top-level competition who had suddenly become available, but back-to-back scraps left him in need of a break from the grind that comes with a consistent string of training camps. Dariush took a small vacation to enjoy the fruits of his labor, and when the time came to jump back into the fray, his manager called Joe Silva and told the matchmaker his fighter was ready to go.

And while Dariush ultimately passed on the initial offers thrown his way, those phone calls provided a realization to the California-based fighter that he had officially crossed over into elite tier of the 155-pound division.

“After my fight with Jim Miller I went on vacation to Israel,” Dariush recalled. “While I was there I got called three times for three big fights. I was called to fight Bobby Green, Donald Cerrone and to replace Anthony Pettis against Myles Jury. At that point I realized I’m now in the shark tank. I’m in deep waters and every fight from here on out is going to come against the best in the world. Every fight is going to be incredibly difficult and is going to test me.”

He knew he would land another one of the division’s best in his next go, and that notion was quickly validated when a bout against Michael Johnson landed on the table. Much like Dariush, “The Menace” has also been wrecking shop in the 155-pound ranks, as The Ultimate Fighter alum has racked up four straight wins over some of the toughest competition the lightweight division has to offer.

With their respective standings in the current divisional picture, a tilt between Dariush and Johnson made perfect sense, and they will both come into their co-main event bout 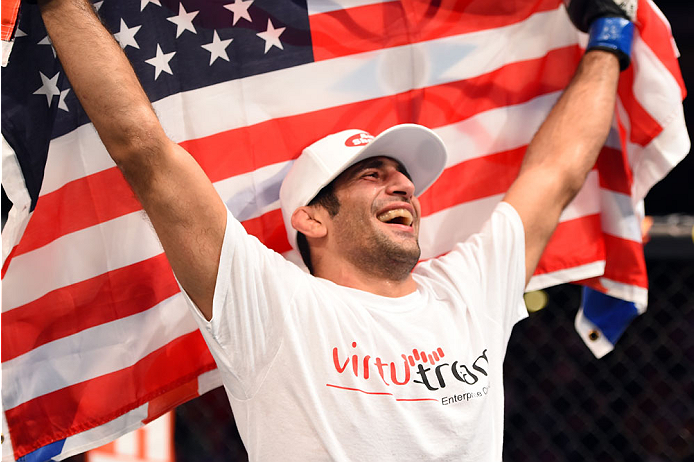 at Fight Night: Teixeira vs. Saint Preux looking to take the next step toward title contention. In Dariush’s mind, his upcoming fight is another perfect opportunity to make strides toward the top of the weight class, and he believes a victory over Johnson will serve as further proof he’s a force to be reckoned with.

“I’m pretty excited to fight Michael Johnson. He’s a good fighter and he’s solid everywhere. The fact he’s ranked No. 5 is a bonus. I’m looking forward to this fight and it is going to show a lot of people what I’m capable of. I think I’ve stayed under the radar and this fight is going to allow me to break out.”