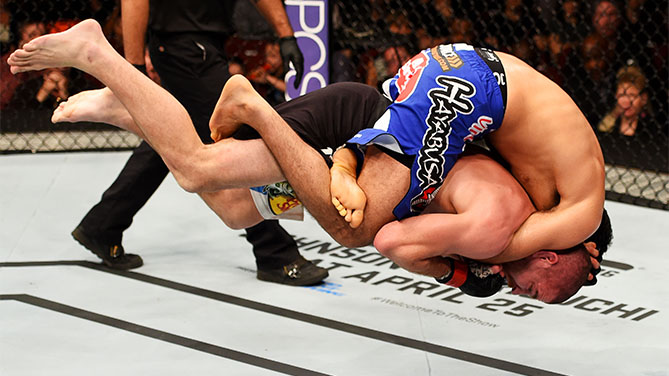 NEWARK, NJ April 18 - It wouldn’t be fair to call lightweight veteran Jim Miller a gatekeeper at 155 pounds, but if hot prospect Beneil Dariush needed a measuring stick to see if he was ready for prime time, he got it Saturday night at Prudential Center, and with his unanimous decision win over the hometown favorite, he proved that yes, he’s ready for the next level.

Miller was sharp with his stand-up as the bout opened, particularly with his leg kicks, prompting Dariush to get in close and try his luck in the clinch. He was able to land with some knees, but Miller quickly reversed, nearly locking in a triangle choke as they went to the mat. Dariush got loose, but Miller kept working from the bottom, keeping Dariush from getting too aggressive.

Dariush took the bout back to the mat early in round two, Miller reversing once more and almost securing a guillotine choke. Dariush smoothly escaped and got into the mount before taking Miller’s back and then going back to the mount. With under two minutes left, Dariush took Miller’s back again and went for a rear naked choke that the Whippany native defended well, but it was a clear round for the Californian.

Winning the position game once again in the third, Dariush’s swarming attack kept Miller locked up for much of the round, which wasn’t pleasing to the fans, but it did lock up the win for rising star Dariush, who upped his record to 11-1; Miller falls to 24-6 with 1 NC. 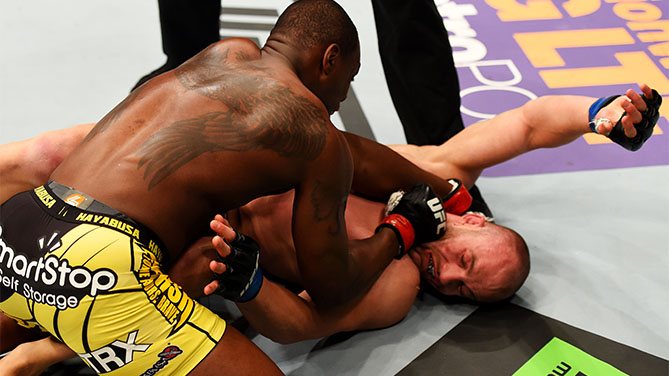 It looked like it might be a long night for number seven-ranked light heavyweight contender Ovince Saint Preux against 12th-ranked Patrick Cummins, but instead it was a short night, as OSP halted his opponent with six seconds left in the first round.

Saint Preux picked at Cummins, waiting for the inevitable takedown attempt, and they came in a set of three, OSP going down but bouncing right back up. After the third, Cummins bulled his foe into the fence for a spell until the two broke and went back to the center of the Octagon. Another thudding slam by Cummins followed, OSP getting to his feet rapidly once more. Saint Preux shot for his own takedown in the closing minute, and while he was turned away, the Tennessee product kept the pressure on and clipped Cummins with a flush left uppercut. Cummins fell to the mat, and Saint Preux finished the bout with a series of strikes, referee Dan Miragliotta stepping in at the 4:54 mark. 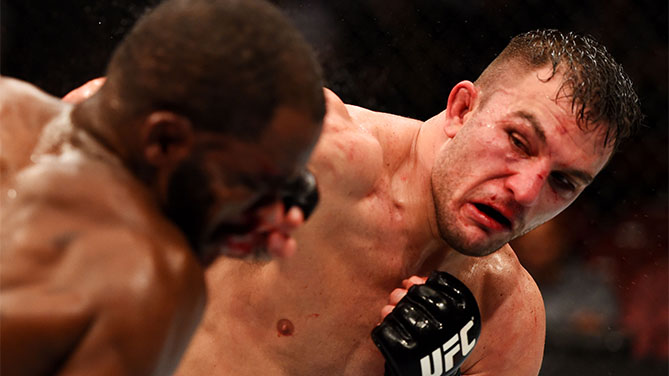 An exciting back and forth brawl between light heavyweights Gian Villante and Corey Anderson ended suddenly late in the third round, with Villante removing Anderson from the ranks of the unbeaten via knockout.

The first round was a fast-paced and interesting one, with Anderson starting fast but Villante (13-5) soon getting his opponent’s timing down, allowing him to land sharp counters and leg kicks and avoid the Illinois native’s takedown attempts. Anderson rallied back though, and the two engaged in some solid exchanges down the stretch.

There was no let-up from either light heavyweight in the second round, with the cardio of both obviously not in question as they slugged it out, Villante taking a slight edge again thanks to his thudding leg kicks.

Anderson (6-1) mixed things up a bit in the final stanza, throwing spinning back elbows and kicks, while Villante stuck to the basics, simply because that was working for him. The Ultimate Fighter season 19 winner was busier than the New Yorker though, as fatigue finally seemed to be setting in. But a single right hand from Villante changed everything, as Anderson took the shot, dropped his hands and staggered. More right hands followed, with referee Liam Kerrigan halting the bout at 4:18 of the third round.
At the time of the knockout, Anderson led 20-18 on one scorecard, with the other two judges seeing it 19-19. 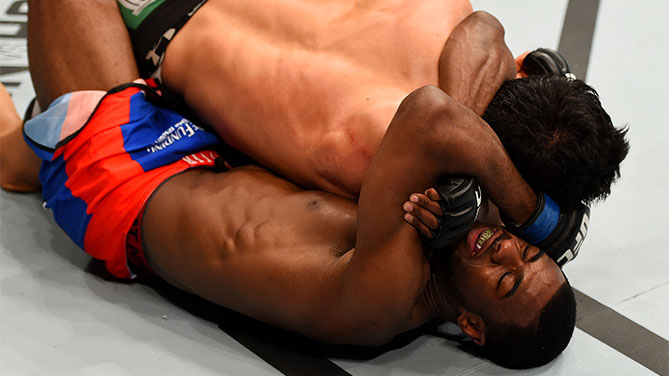 Unbeaten bantamweight prospect Aljamain Sterling likely locked up a spot in the top 15 at 135 pounds, as he scored the biggest win of his career, submitting the number six-ranked Takeya Mizugaki in the third round.

The first round was a battle of wills, but not a particularly action-filled one, as Sterling mauled Mizugaki against the fence for much of the frame in an attempt to score a takedown. He got two late, but Mizugaki bounced right back up both times.

Switching stances to throw Mizugaki off, Sterling was able to find an opening for a quick takedown early in round two, but against Mizugaki was up almost immediately. What the Kanagawa contender wasn’t able to do was shake free from his opponent’s grasp consistently, and when he did, his striking game wasn’t paying any dividends at all. Midway through the round, Sterling got Mizugaki to the mat and was finally able to keep him there for more than a few seconds, taking his back in the process, where he stayed until the bell.

There was more of the same in the third, but this time, Sterling saw what he wanted to see from his opponent and he pounced, catching Mizugaki in an arm triangle from the bottom position, with the Japanese contender tapping out shortly thereafter at 2:11 of the final round.