Danny Roberts: ‘The Most Dangerous Underdog’

Time Away From The Octagon Just Made Danny Roberts Stronger And More Excited To Release His Potential At UFC Fight Night: Ladd vs Dumont
By Maddyn Johnstone-Thomas • Oct. 15, 2021

For the first time in almost two years, Danny Roberts will step into the Octagon. It’s time away where he encountered fight postponements, a positive COVID test and, most of all, growth. While some might struggle to accept the time on the sidelines, Roberts chose to view it as a humbling experience.

“It was hard, but it wasn’t a case of necessarily looking at the long road and the big picture, but just taking it each day as it goes, sometimes each hour by hour,” Roberts told UFC.com. “It would be enough to make most people crumble, but again, I can say the trials, the tribulations and adversity that I’ve faced in life only built me for moments like these.”

Saturday will be a moment that the welterweight hasn’t encountered before — being able to fight in the UFC APEX in Las Vegas, Nevada. Since joining the UFC in 2015, the Liverpool native has fought all over the world, from Canada to Scotland to Russia.

But there is something about the silence in a small venue, such as the APEX, that excites Roberts.

Standing across from Roberts in the Octagon on Saturday will be 34-year-old Ramazan Emeev. “Gorets” comes into the bout with a two-fight win streak after earning victories over David Zawada and Niklas Stolze.

Since joining the UFC in 2017, Emeev has registered a 5-1 record, with all his victories in the Octagon coming by decision. Even though he has been to the judges’ scorecards for all his UFC victories, that doesn’t take away from the wrestling skills that he is going to bring to the fight.

So, why does Roberts believe he will be the one to shut Emeev down?

“I’m probably one of the most dangerous underdogs you can put in the cage with someone like that,” Roberts said. “I think stylistically it makes for a fantastic fight, but I think everything that I bring to the table is above and beyond what he is capable of in a sense that it is going to be hard for him to hold that still. I’m really looking forward to be able to showcase some skills.”

Roberts is as eager as ever to make the walk to the Octagon and feels it will be a very nostalgic moment. He embraces the underdog role and thinks that often people underestimate him and his abilities.

“I don’t think for one second that he’s going to underestimate me, but I think with what I bring to the table offensively, he will not be able to control it and that’s the issue,” Roberts said. “That is the issue he will have.”

RELATED: Norma Dumont Ready For Anything | The Wait Is Almost Over For Aspen Ladd

For “Hot Chocolate,” the time away was exactly what he needed to advance his career to the next level and make a crack at the Top 15. Roberts undeniably believes that everything happens for a reason. He knows that whatever happens on Saturday is supposed to happen.

When he looks back at his life and UFC career, he points to the things he has persevered through. His time is now. 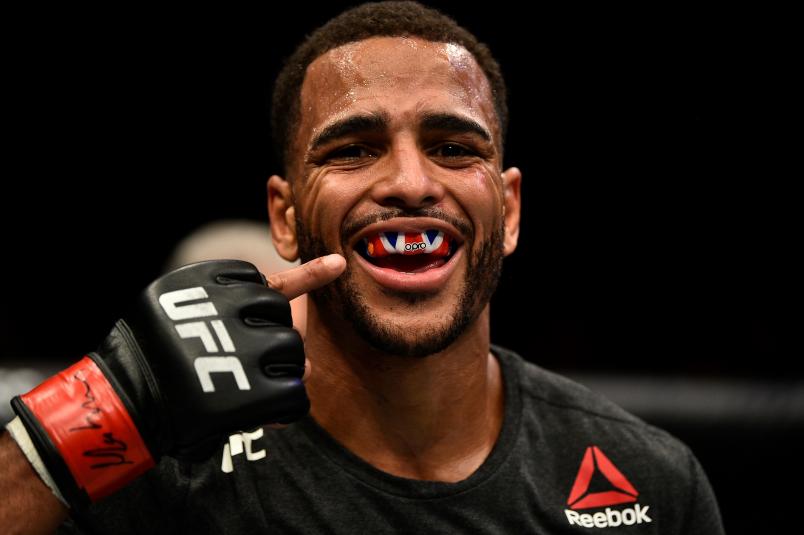 LONDON, ENGLAND - MARCH 17: Danny Roberts of England celebrates after defeating Oliver Enkamp of Sweden by knock out in their welterweight bout inside The O2 Arena on March 17, 2018 in London, England. (Photo by Brandon Magnus/Zuffa LLC/Zuffa LLC via Getty Images)

“The trials and tribulations that I’ve faced since being in the UFC and being a UFC vet, for me they (trials and tribulations) don’t define you,” Roberts said. “If anything, they help push you into the great potential that you haven’t released. For me, I’ve gone from strength to strength to strength. I haven’t been someone that has been on the decline. If you look at my performances, I’ve only gotten better. I’m always evolving, always getting better, always growing. For that reason, I have so much self-belief and self-confidence it is unreal.”