Danny Martinez: His Shot is Coming 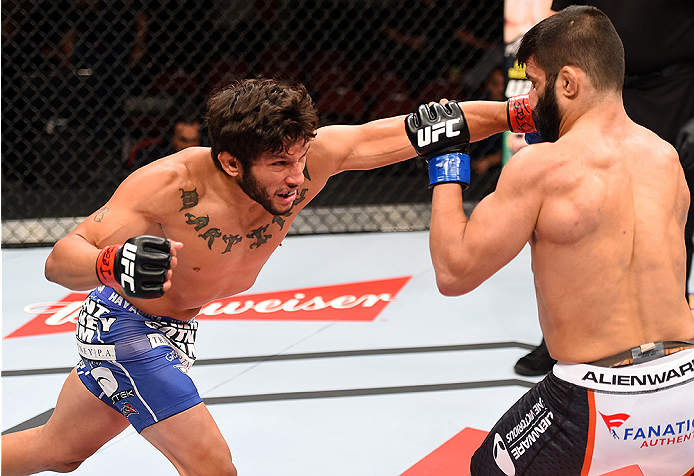 Danny Martinez hasn’t had the easiest run in the Zuffa organization, but the San Diego flyweight is far from finished. So despite three consecutive UFC losses, as he approaches his UFC 193 bout against Richie Vaculik, he finds confidence in something his coach Eric DelFierro told him earlier this year.

They’re words of wisdom that hit Martinez so deeply that he wrote them down and made nearly two dozen copies to place on mirrors around his home and to bring with him to Melbourne, Australia.

Martinez refers back to the days when he trained in Arizona with the likes of UFC vet Fickett, Anthony Birchak, Seth Baczynski, Efrain Escudero and Yaotzin Meza.

“When I used to train with Drew Fickett, he was my first coach, and he really knew how to build people’s mentality up to where you would never be broken,” he said. That’s something I’m grateful for. And that’s one thing we all carried, the confidence to finish a fight by just going and being hard workers. Eric recognized this when I first moved to San Diego, and he wanted me to keep this as long as I can.”

So with that attitude, the odds of Martinez showing up on Saturday night and trying to lay and pray his way to his first UFC victory are zero. It’s just not the way he’s built, and Del Fierro doesn’t want to change him.

“He never wants me to play it safe,” Martinez said of the Alliance MMA boss. That doesn’t mean they’re not aware of what’s at stake at Etihad Stadium.

“I think it’s always a must-win situation, especially with me being 0-3 in my first three fights and losing on The Ultimate Fighter,” he said. “Two of those fights were at 135 and they were all short notice except for the Scott Jorgensen fight. That was a nine-week camp and I prepared for that and we received Fight of the Night and I was grateful for that. And now, I’m prepared more than ever now and it’s always a must-win situation. When you’re fighting with the UFC, there’s a whole world trying to be in this organization and be in the limelight, and a single loss or even a win that the fans don’t approve of can also get you cut.”

What is the hump that Martinez hasn’t been able to get over though? He’s never been blown out in the UFC, he’s been in every fight, and as he mentioned, the loss to Jorgensen earned him Fight of the Night honors. Has it just been bad luck, or is there something that can be tweaked to avoid these defeats in the future?

“Being an MMA fighter, you have to put everything together, from striking to your wrestling,” he said. “I’ve been wrestling for 20 years – I can wrestle. I can strike too, but I can’t put them both together at the same time, and I’ll lose a fight. It’s a long road to do that. It’s gone up another level in the UFC, and that’s what I’m really concentrating on.”

Tough used to be enough for the 30-year-old Martinez. Now he knows it’s not nearly enough, and he’s fine with that, because he’s ready to take his game to the next level against Vaculik and get back to the win column.

“I think he matches up really well with me,” he said of Vaculik. “We both love to throw hands and we both want to go out there and get a Performance of the Night victory, so I think it’s going to be the best fight of the night.”

And a new beginning for a veteran who isn’t just a good fighter, but a good man. A father of two daughters, Martinez makes a concerted effort to give back to his community through his Gremlin’s Kids program, which sees him speaking at schools about bullying and how to combat it. It not only helps the children he speaks to, but it reminds Martinez that despite all the tough days that go along with being a mixed martial artist, the fighting life opens the door to do things like this for his community and be there to watch his girls grow up.

“I get the opportunity to do things that people have never been able to do,” he said. “I’m grateful that I get to do what I do, because I’m in the lives of my kids and in the lives of the community. I get to give back to the homeless and to the kids. I go to the schools and talk to them about bullying. I have the Gremlin’s Kids organization. My time is my time, I believe, and MMA has given me the gift to have my life and to do great things with it.”

That’s more than enough motivation for anyone to win.