While the pandemic has affected Danny Henry's ability to work, it's led to fighting full-time and more time with his son
By Thomas Gerbasi, on Twitter: @TGerbasi • Jul. 6, 2020

The COVID-19 pandemic has affected everyone around the world in one way, shape or form. In the case of UFC featherweight Danny Henry, he’s been able to take a negative situation and turn it into a positive in the lead-up to his return to the Octagon this weekend against Makwan Amirkhani.

“As much as this time has been terrible and it's awful - a lot of people have suffered and stuff - it's almost been a blessing for me,” said Scotland’s Henry. “I've got a young son now, he's just turned one, and I've been off work for two, three months so I've got to spend a great deal of time with him and just reevaluate what's important in life. And on the fighting front, this will be the first time I've had a sort of consistent fight camp where I've not had to work full-time. I'm usually doing 40-50 hours a week, even when I am running up to a fight, so five weeks of getting to bed at the same time every night and proper sleep and rest, it's gonna make a big difference, I think.”

There’s no better “glass half full” outlook than that for the 31-year-old, who has put together a 2-1 slate in the Octagon since making his debut in 2017. If you’re keeping score, that’s one fight per year, a streak Henry wants to snap in 2020.

“I've had no luck, man,” he said. “I was matched in August and was supposed to fight on the Copenhagen card, then about two weeks before the fight I got injured. And then I was matched in April in Lincoln, Nebraska, and obviously that got canceled for COVID, so I've been pretty unlucky the way things have panned out.”

The fans have been unlucky as well, as Henry has shown himself to be an intriguing addition to the UFC roster thanks to a Fight of the Night debut win over Daniel Teymur and a 39-second submission of highly touted Hakeem Dawodu. As for a quick submission loss to current featherweight contender Dan Ige in his most recent bout in March of last year, there are no excuses from “The Hatchet,” it just wasn’t his night.

“My last fight was pretty short and sweet with Ige,” said Henry. “He came out, he clipped me and he caught me early. I was ready for that fight, I was in great shape. I've definitely improved since then, too, but I was in peak condition for that fight, I just got clipped, and that's the nature of the beast. That's the nature of the sport, it happens.” 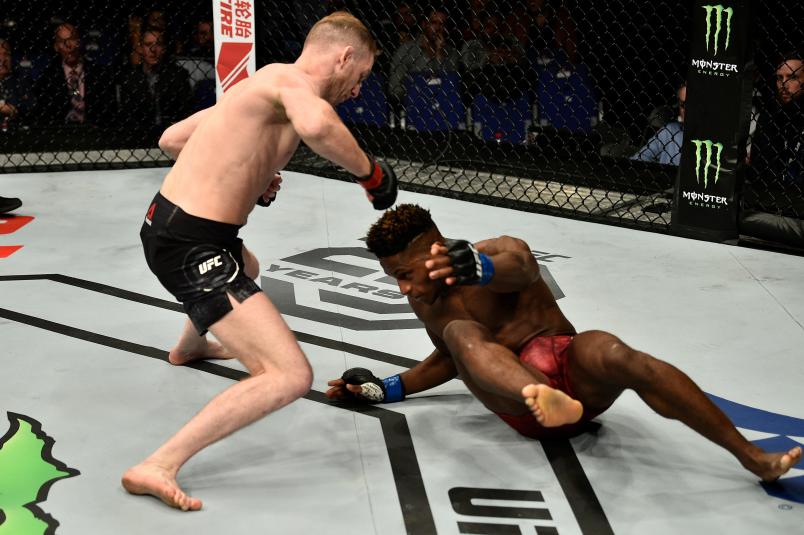 It’s why Henry has wanted to get back to work as soon as possible, and while that didn’t happen, he is coming back this weekend with a top-notch matchup against Finland’s Amirkhani that oddly wasn’t one on his radar as the two came up the ranks. That may have to do with Henry fighting his last seven fights leading up to his UFC debut in South Africa and not Europe.

“I've never really looked at European guys and thought, ‘I'll end up fighting him,’” said Henry. “We weren't really mixing in the same circles on the way up. I'm not even sure what promotions he fought in. But I actually quite like watching him fight. He's always pretty entertaining and he's talented, a good grappler with strong wrestling, dangerous in that first round. But he's never been someone who I've been like, 'Oh, I would like to fight him.' The matchmaker sent me the match and I signed the agreement. That's what it is.”

Henry is as no nonsense as they get when it comes to life in and out of the Octagon, but that doesn’t mean he won’t get a little excited when the topic of competing on the UFC 251 card on Fight Island comes up.

“It's a historic event and the card that I'm on, I don't think I'll be on a better card in the rest of my career,” he said. “The lineup is stacked from top to bottom and some of my personal favorite fighters are on it, so I'm really excited just to share a card with these guys. On top of that, fighting behind closed doors with no crowd I think is going to bring out the best in me, as well. Not that the crowd gets the better of me or anything, I just think I'll perform better if I can listen to my coaches and their instructions. It will be more like a glorified sparring session as opposed to a high stakes shootout.”

“Definitely,” Henry says without hesitation. “A number of my friends have been like, 'Oh, I can't believe you're on that card.’ (Jose) Aldo and Petr Yan's on it, and (Kamaru) Usman, and they say they’re definitely gonna stay up and watch it no matter what time it is.’ Everybody's gonna do it. These guys are the elite of the sport, so, for me, even though I know it's gonna be closed doors when we're over there and we'll be sort of in our little bubbles, it's just gonna be nice to be almost face-to-face with these guys and see how they react during fight week. I'm gonna go over there and take it all in. The featherweight title fight's there with Max (Holloway) and Volkanovski and it's gonna be interesting just to see how it all pans out. I'm relishing all of it.”

Most of all, Henry is relishing his opportunity to put the gloves on and fight again.

“I wouldn't say so much it's a fresh start,” he said. “In the last 14-15 months, nothing's really changed and I've still been training pretty consistently. But it's a fresh opportunity and I'm certainly going to make the most of it.”