“I always tell people I’m either stupid, arrogant, or confident in my abilities, and it’s probably just a combo of the three.” - Danny Downes 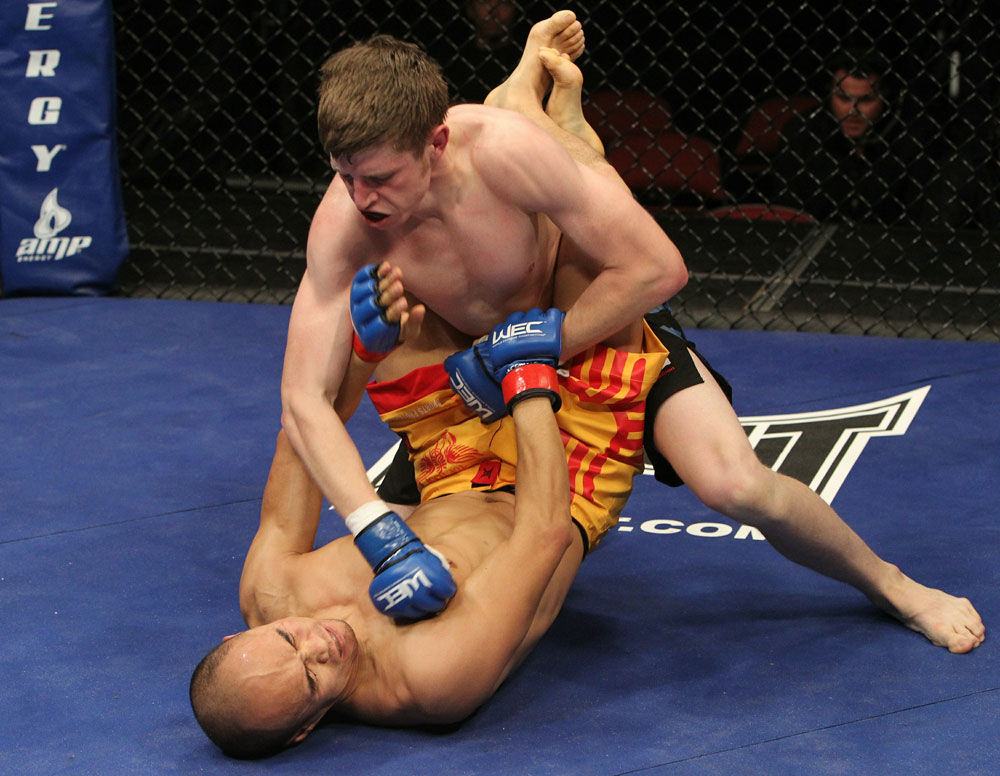 The rear naked choke was sunk in tight by Tory Bogguess, but in the interest of space and time, we’ll only reprint a couple of the thousand thoughts running through the mind of the recipient of that choke, UFC lightweight Danny Downes, who was seconds away from possibly losing the “UFC” in front of “lightweight” if that May 6th submission attempt was successful.

“I have to put my arm here, relax, control your breathing, listen to your corner.”

“You idiot, you did it again, you’re caught in something.”

Downes had been here before, nearly a year earlier, when he faced Chris Horodecki and lost his WEC debut and his perfect pro record via rear naked choke. Since that bout, he decisioned China’s Tiequan Zhang and was gearing up for his UFC debut. But while waiting, he wanted to stay sharp with a local fight in Milwaukee against the 5-4 Bogguess.

This wasn’t what he bargained for. But you never know what you’re going to get in a fight, another lesson learned for “Danny Boy,” who calmly looked for an escape hatch.

“I gave myself a little mental lashing with a couple expletives, but I just stayed composed, and once I got out, I was like, all right, let’s get back to work.”

Downes escaped the rear naked choke, but a guillotine was waiting for him. He escaped that one as well, and finally, at the 3:39 mark of the first round, he finished Bogguess via triangle choke.

“Hindsight’s 20/20, and obviously it worked out, so it’s like ‘oh yeah, it was a brilliant move,’” he laughs. “But then if I lost, it would have been the dumbest thing ever, so I suppose the result skews how it went. But all things aside, it was worth doing to stay sharp and it also put more attention on me than I would have gotten for other things. You can spar, you can train, you can do as many pushups as you want, but even if you’re fighting someone no one’s heard of, a fight’s a fight and the experience of being in the cage, you just can’t replicate.”

That’s fighting talk from a real fighter, but maybe not what you would expect from a Marquette University graduate who double majored in International Affairs and German and interned for the United States Secret Service. And that’s the hook isn’t it? The unlikely prizefighter battling it out in the Octagon when he could probably be doing whatever he wanted to in life.

“It’s like the Rocky story,” said Downes. “I’m just a little more well-spoken than him. If you see Brock Lesnar go in a cage and beat up a person, well, yeah, look at him, he’s a beast. People see me, and through my whole career, I’ve had people telling me, ‘yeah man, when I saw you walk in the cage, I thought you were gonna get your ass kicked.’ (Laughs) There’s that part of it, and I also get the ‘you don’t seem like a fighter thing.’ People ask me ‘what do you do?’ I’m in the UFC. ‘No, but seriously, what do you do? Don’t lie to me, we just met.’ No, really, I promise you. And if I may be bold, I’m charismatic to a certain extent. It’s something different. There were guys on the (Chicago) Bulls like Jud Buechler and Bill Wennington, and they were kinda unathletic, slow white guys, but they were always the fan favorites, and every team has those guys.”

Yet as self-effacing as the 25 year old Chicago native may be, he isn’t here for his personality. There are plenty quick-witted folks out there, but few get invitations to fight in the WEC or UFC, and Downes, while a work in progress, does have the raw talent needed to take his game even further. But with just nine fights, two on the big stage, is he ready for his opponent this weekend, Jeremy Stephens?

“I always tell people I’m either stupid, arrogant, or confident in my abilities, and it’s probably just a combo of the three,” said Downes, who took the bout on short notice when Jonathan Brookins was forced out due to injury. It’s not the first time he’s answered a Zuffa call with ‘yes’ before the question was asked, and you have to admire his chutzpah and impatience.

“If they said ‘would you want to fight BJ Penn?’ obviously that would be a big opportunity, but that’s not really the best thing for my career,” said Downes. “So it’s just picking and choosing. Stephens has been there a while, he’s big and strong and not a pushover by any means, but I like the way I match up against him, I like the opportunity, and I think it’s the right move for me.”

And he probably would say yes to a fight with Penn now anyway.

For now though, it’s Stephens, and a fight for Downes which “Lil’ Heathen” himself admits is a no lose situation for the Roufusport team member. If he wins, it’s gravy; if he loses, well, the oddsmakers said he would. Downes doesn’t quite look at it that way.

“You’ve got a lot to lose besides brain cells from getting punched by Jeremy Stephens,” he said. “If you look at it honestly and look at oddsmakers and who they’re picking and how the majority of the people think this is gonna play out, if I win, it’s an upset. And if you view it as an underdog / favorite thing, I guess he has more to lose, but I have a lot to lose too. The UFC is competitive and you’re always risking something, and not just your health. Especially at lightweight, it’s such a competitive thing, and you can’t take fights haphazardly and just get in there and lose, because you never know if you’re gonna have another one. So I wouldn’t say I have nothing to lose. I would say that this puts me in a better position than him, and I definitely plan on playing the spoiler.”

That’s as bold as he’ll get when it comes to calling the fight, and frankly, it’s refreshing, because trash talk and callouts become a dime a dozen after a while, so to hear some witty humor and honesty in place of bluster is a welcome change. Downes is smart enough to know it too.

“Everyone likes big, strong athletes, but people don’t want meatheads,” he said. “If I walk out there and say ‘I’m gonna kick your ass,’ or ‘I’m gonna knock you out,’ people are gonna be like ‘well, that’s not gonna happen.’ So it’s like Biff and Marty McFly from “Back to the Future.” You can’t go up there and threaten Biff. It doesn’t make any sense and no one would buy it; they’d laugh at him. So I try to use the weapons I have.”

And those weapons are getting sharper with each fight, leading to the obvious question: with everything on your side outside the Octagon, why step inside of it to fight? It’s a generic query, but if you’ve been reading so far, you know you won’t get a generic response.

“You know how they talk about Freud and the tri-part division of the mind?” he asks. “It’s all Id. When I’m in the cage, I don’t have to worry about if I paid my bills or all the other stuff in the back of my head. I’m just there, and I’m singularly focused on one objective. It centers you. I call it primitive, but not as a negative connotation; I mean it in a good way. It’s you against another guy and you’re fighting for supremacy. It’s not who can hit a ball a certain way or throw something in a basket, it’s two guys going in there and it’s that innate desire to win. There are violent aspects of it, but it’s not for violent people. It’s that test. That’s why people run marathons. I think that’s stupid; I wouldn’t want to run for five hours, I think that’s a terrible idea. But people do it because they’re trying to push themselves to that limit. You want to see how far you can go. If you can get punched and then come back, my coaches say you find out a lot about a guy in a fight, and that’s why I do it. It’s that challenge.”

Can you get more real than that? Probably not, but Downes will try, giving a glimpse not only into his own psyche but that of most of his peers.

“People appreciate the honesty, and if you reveal part of your vulnerability, I think that endears you more to them,” he said. “A lot of guys go ‘yeah man, I’m not scared at all.’ I have no problem saying oh yeah, I get scared. I’m just being honest. That doesn’t mean I’m terrified, that doesn’t mean I’m gonna go out there and fight to not get hurt. But any fighter that says they go in there and they’re not worried or don’t have nerves is being disingenuous, and I think people recognize that.”