"In every fight I feel like, win or lose, I've come back stronger, and in this fight with Brenneman I feel like I've got a lot to
prove." - Danny Castillo 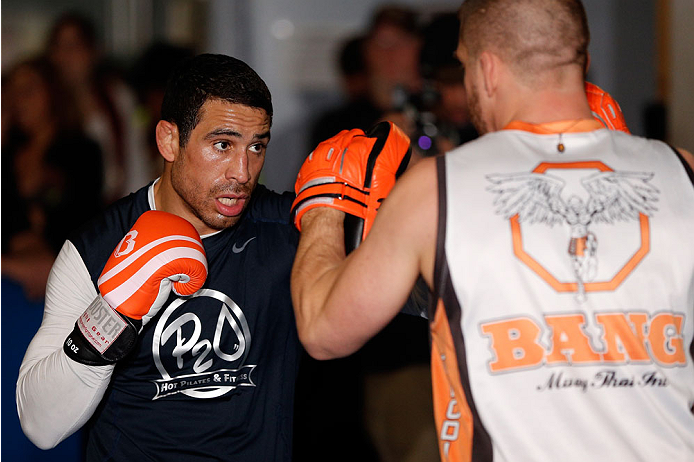 Danny Castillo is known for his trademark retro-style headband.

He is also known for being handsome. Just ask him. In fact, he and Ramsey Nijem once had an ongoing debate on Twitter over who was the more handsome of the two.

That’s not to mention being known for his hilariously formal weigh-in outfit. If you haven't seen it, do yourself a favor and check it out the day before he fights Charlie Brenneman at UFC 172 on April 26.

But more than anything, "Last Call" is known for his work ethic. It's something wrestlers tend to pride themselves on and Castillo is no exception.

"I'm a workhorse. I feel like I'm one of the hardest workers on the team."

That wrestling background has been supplemented in the last couple years by his work with UFC veteran Duane "Bang" Ludwig. Ludwig's striking pedigree is top of the line, but don't expect Danny to fall into the familiar trap of a fighter who learns a new trick and abandons his core skill.

"I'm not the brightest guy in the world," Castillo says "but about certain things I am and I see that all the time - where a wrestler falls into that. Wrestling is what got me here and I was wrestling before I could ever even throw a punch. I'm a wrestler and I'll always be a wrestler."

He goes on to explain that he and his coach are on the same page in that regard, "If you have a fight against someone with weak takedown defense, he [Ludwig] will have you expose it but he's also gonna have you use striking to open up those takedowns"

The evolution of that striking was on display in his last fight against Edson Barboza. It was evident that Castillo was comfortable standing with Barboza - a man renowned for his striking and, in particular, his vicious kicks. It was a back-and-forth and extremely close, competitive fight that ended in a majority decision win for the Brazilian.

I ask Danny if he feels he should've won and if his losses haunt him or he just learns from them and moves on.  "A lot of people come up to me and say 'I had it as a draw' but to me a draw is still a loss. A draw's not a win. I try not to dwell on the negative with anything in life but yeah, I'm still upset," he admits "Not about Barboza grabbing the fence or the judging, but just upset with myself. There were times where I could have pushed more, and that was my fault. I didn't execute the plan in the third round and kept pressing forward...I take responsibility for that."

If anything, Castillo feels like the mistakes that cost him the decision are motivation for the upcoming fight. "In every fight I feel like, win or lose, I've come back stronger," he insists "and in this fight with Brenneman I feel like I've got a lot to prove."

The change of opponent from Isaac Vallie-Flagg to Brenneman doesn't seem to have phased Last Call much either. "I was looking to stand up with Vallie-Flagg and I'm looking to stand with Brenneman. The only difference is that he's a better wrestler than Ike so I have to watch out for that, but I think I'm better than him in every aspect of MMA," Castillo says. "I'm happy with the fight. I'm happy just to have a job, man. It's a rough sport and if you're not performing, you're gonna have to find another job and I don't wanna do that. I'm happy with the UFC. I fought with them since Zuffa had the WEC. That’s nearly my whole career."

If the frequency of his fights are any indication, his job is secure. "I stay ready and I don't take any time off. So I'm able to take those fights if someone gets injured," he says. There's that wrestler's work ethic again and it's something Castillo always brings to the table in all his fights.

Before I let Danny head to his jiu-jitsu training, I ask him if there's anything else he'd like to mention and he handsomely says: "Whatever you do, make me sound handsome."