“I swing for the fences and I try to end fights. I don't like fighting 15 minutes. In the end, I want the UFC fans to say that guy ‘Last Call’ brings it and I can't wait to see him fight again.” - Danny Castillo 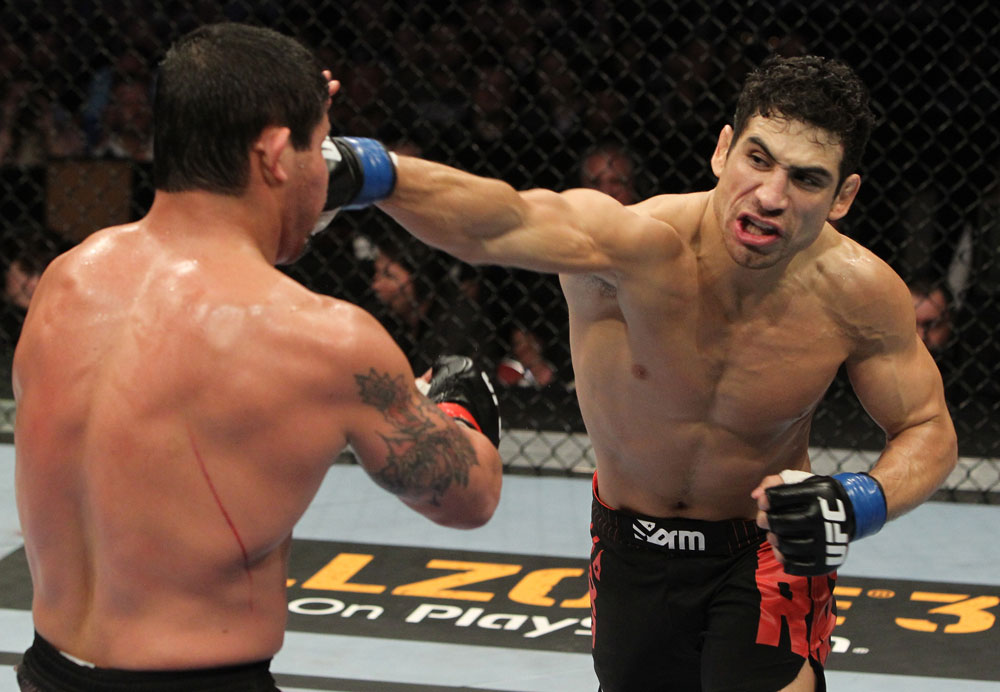 The UFC “jitters”. They can affect the best and the brightest, vaunted rookies and seasoned veterans alike. When it’s that first time in the Octagon, fighting on the biggest stage in the world and that cage door shuts, even the toughest of fighters have gotten a taste of the jitters. Simply defined, they’re just good, old fashioned nerves and they come because, honestly, there is nothing that compares to fighting for the UFC.

On March 3rd in Louisville, Kentucky, the jitters got to Danny “Last Call” Castillo... and he still won.

“I think the jitters really hit me,” admits Castillo. “I don't think it was a sellout crowd, but wearing those black gloves and hearing Bruce Buffer and it was my first fight against a solid UFC opponent. I think I was off to a slow start, but I don't necessarily think I even lost the first round. He had a big takedown, but after that I think I won that round on my feet.”

After going 5-3 in the WEC, Castillo is candid that he felt that nasty performance anxiety bug in his Octagon debut against The Ultimate Fighter season 2 winner Joe “Daddy” Stevenson.

“I don't think that I performed to my highest potential, but I came away with the win against a tough opponent and I'm happy about that,” says Castillo, who faced a high profile challenger in his first fight and walked out with a unanimous decision victory. “After watching the fight and reliving the fight, I felt that I was a better standup striker and better on the ground as well. It was really unfortunate to not be able to really compete. It sucks to know that you are better than how you perform.”

It makes sense that the jitters did strike the soon to be (August 25) 32 year old, because Castillo knew exactly how important this fight was for his career. No matter what notoriety and fame that “Last Call” gained while being under the WEC banner, it would certainly pale in comparison to any success Castillo could earn fighting in these new black gloves and inside this new black cage. The lightweights are easily the most talent rich and bloodthirsty division there is to be offered in the UFC and he knows that better than anyone. This was the biggest moment for his career and at the weigh-ins for the Stevenson fight, Castillo dressed accordingly in a tuxedo.

The victory over Stevenson makes it a three fight win streak, improving the Californian’s record to 11-3, and adds more confidence going into Castillo’s next fight.

“I feel with each win I start at a higher level as opposed to a loss,” said Castillo, asserting that he uses each win as a jumping off point to improve in training, which in-turn will make him better in the cage. “I started at a higher level for this camp than I was at when I started three camps ago. With each win I have, everything that I did well in that win and everything that I did well in that camp continues to the next camp. After I win this fight, I'm looking to grow as a fighter and looking to fight someone who is in the top 20.”

On August 14th at UFC Live in Milwaukee, Castillo’s next challenger will be the three-time NCAA All-American from the University of Minnesota, Jacob “Christmas” Volkmann. With an overall record of 12-2, Volkmann has been enjoying a three fight win streak of his own since his move down to lightweight. Volkmann trains at the highly regarded Minnesota Martial Arts Academy with many notable fighters like fellow UFC lightweights Nik Lentz and former champion Sean Sherk. Regardless of his nice resume, an infamous interview where Volkmann jokingly mentioned he would fight President Obama has become his claim to fame.

“It kind of sucks because Volkmann's a really tough fighter and I know that,” tells Castillo. “He's a talented guy and I know that, but no one else knows that because the only thing they know about him is that he wants to fight Obama. When I told people who I was fighting, I would say I'm fighting Jacob Volkmann. They would say, who is Jacob Volkmann? And I would say, you know the guy that wants to fight Obama? Ooooh that guy. It's kind of annoying, but I don't really care what other people think. I only care what I think and I think I'm going to win. I'm hyped up for this fight.”

Pseudo-politics aside, this is a solid matchup of two rugged wrestlers, but Castillo believes it his other strengths that will get his hand raised.

“I think my standup is going to be showcased and I think I'm going to surprise a lot of people with my strength and conditioning program,” declares Castillo, who sees himself as a well-rounded fighter whereas Volkmann is fairly one-dimensional. “I don't care how long he has had to prepare, I think we've had 10 weeks or so for this fight camp, I don't think he will have turned himself into a dynamic fighter. I feel like if all I have to worry about is his wrestling, then I'm a happy man. I can really let loose in this fight and really showcase what I have to offer.”

To prepare for this fight, “Last Call” trains with what he believes is the best lighter-weight camp in the world: Team Alpha Male.

“It means the world to me to have these awesome world-class training partners that are all ranked in the top 10,” says Castillo of his friends and teammates Chad Mendes, Joseph Benavidez and, head honcho, Urijah Faber. “I surround myself with champions and I surround myself with winners and that definitely comes to play in my fight game as well. There are things that can't be taught, like confidence and the mental aspect of the game, and with these tops guys, I call them consultants; anytime I have a problem I can talk to them about anything. When you have a lot of guys around you who are motivated and determined, your focus is even stronger.”

In Milwaukee, Wisconsin at UFC Live, Castillo wants to dominate Volkmann and showcase all his abilities as a fighter. “I have good jiu-jitsu, good Muay Thai, good wrestling, and I'm strong as [expletive],” he said. The Californian also wants to make the statement with his second fight in the UFC which he feels he didn’t do in his debut. “I swing for the fences and I try to end fights. I don't like fighting 15 minutes. In the end, I want the UFC fans to say that guy ‘Last Call’ brings it and I can't wait to see him fight again.”

As for those pesky jitters, Castillo already has that first win under his belt plus he has a veritable army at his back helping him on his road to another victory.

“After I beat up Jacob Volkmann, that's not just for me, that's for so many people: my friends and family, my teammates, my massage therapist, my chiropractor, my hypnotherapist, my sports psychologist. There are a lot of people who invest a lot of time and energy into me, and when I win on August 14th that is going to be my thank you to them.”

And with all those people on Castillo’s side, there will be no room for the jitters.