If you’ve been watching the sport of MMA for any length of time, you already know there’s a certain intangible electricity, an aura, an extra thrill when two Brazilians step into the Octagon to square off. The pride of winning on behalf of an entire nation in their beloved martial arts results--more often than not--in incredible contests of pure tenacity. Danilo Marques doesn’t disagree, but he doesn’t exactly enjoy it, either.

“I don’t like to fight against another Brazilian. It splits the fence in Brazil, for sure. I can see it in comments and interviews and everything. But like I said, it is what it is. So we have to fight. That’s the show.”

Luckily for us fans, that is the show, and it figures to be quite a spectacular one when Marques returns to the Octagon this weekend in hopes of spoiling the UFC debut of countryman Jailton Almeida on the prelim card of UFC Fight Night: Hermansson vs Strickland. It’s a rebooking of an anticipated matchup that was slated to go down last November.

“I had a little problem with my elbow and I had to do a surgery,” explains Marques. “I did. Perfect recovery. We’re here today.”

Indeed, we are. As he sits in the UFC APEX a couple days out from showtime Marques exudes a loose, cool confidence. If anything it bothering him, it’s impossible to detect.

“Yeah. It’s a special moment for me to be here. It’s my fourth fight in the UFC. I’ve enjoyed it day by day. Doing my work step by step. I just want to do my job. I’m ready. I’ve been working a lot in my camp, studying timing. Everything’s perfect. I cut weight. I’m feeling good.”

When we last saw Marques, he was suffering an uncharacteristic loss—his first in the UFC and only his third in 14 professional fights—to Kennedy Nzechukwu last June.

“I worked a lot for that fight,” he sighs. He reflects that maybe his mentality took a hit when he didn’t get the first or second round finish he was certain he’d get. The next thing he knew, the referee was stopping the fight. But there isn’t a trace of bitterness or regret in his voice. He seems to accept it with the same ease that you’d accept a restaurant being out of iced tea. 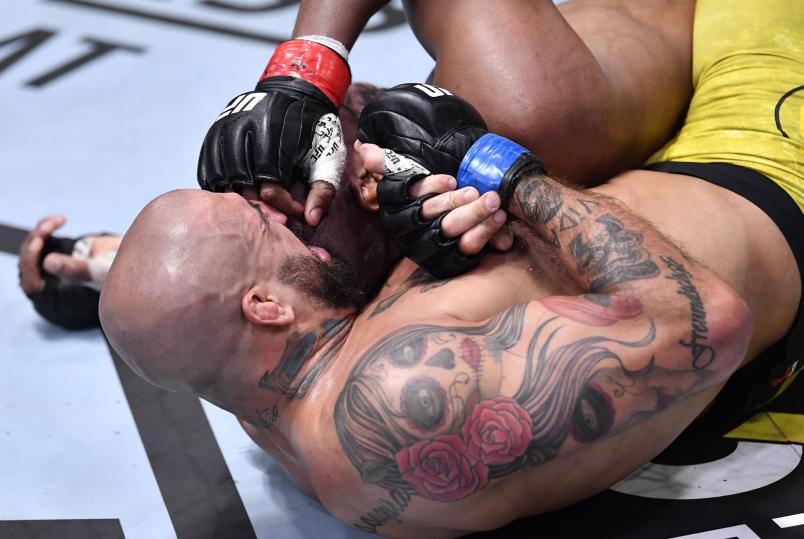 “I learned a lot. My stamina was not too good. I improved myself in this way. Now we’re going to show fans the best part of me.”

It’s a great, infectious attitude, and he attributes at least part of it to his camaraderie with training partners Demian Maia and Mauricio Rua; legends to most of us, family to Marques.

“Demian is like an older brother. Shogun, too. I’ve been with these guys a long, long time. 12 years. And I learn a lot from them. From Demian Maia I learned a lot of jiu-jitsu and how to do jiu-jitsu in MMA; with gloves it’s completely different. From Shogun I, of course, learn Muay Thai and heart.”

Heart will likely come in handy against Almeida, a highly touted prospect who enters the UFC on a nine-fight win streak, which is a truly admirable feat at light heavyweight. Scoring a contract from his fantastic submission win on Dana White’s Contender Series last September, the 14-2 Almeida wields a similarly lethal ground game to Marques. 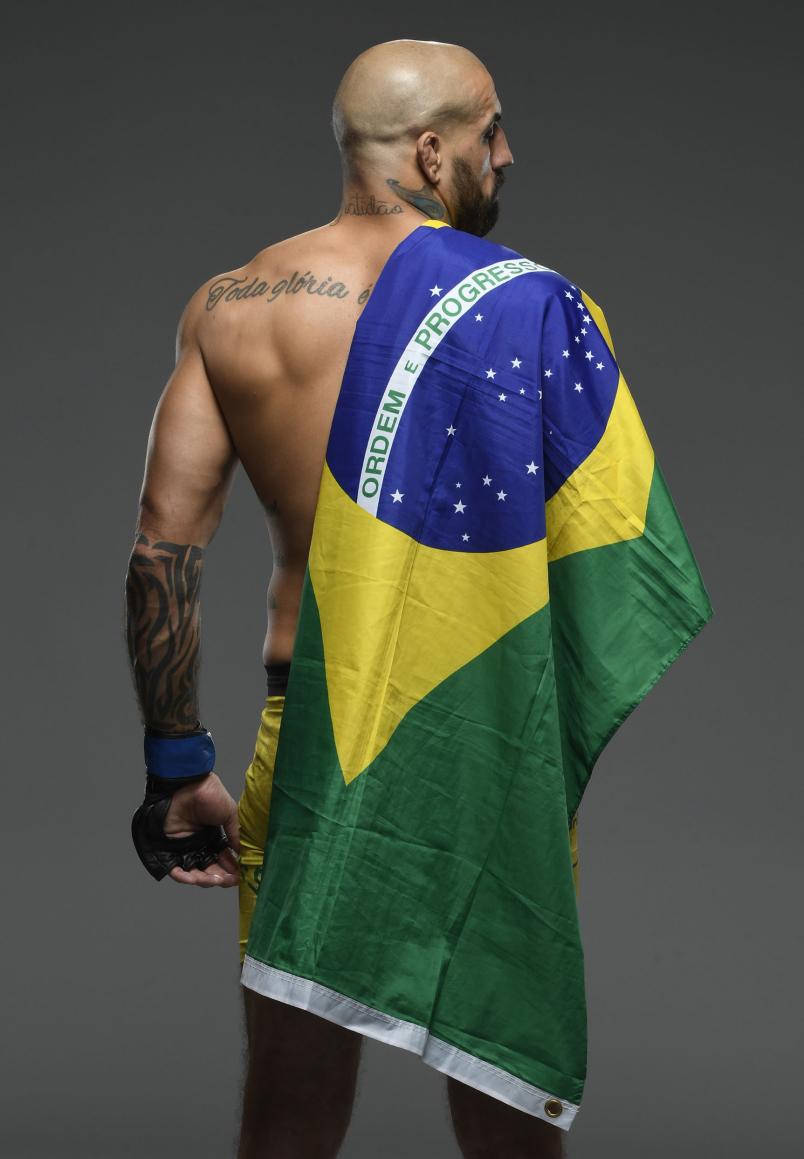 Danilo Marques of Brazil poses for a portrait after his victory during the UFC Fight Night event at UFC APEX on February 06, 2021 in Las Vegas, Nevada. (Photo by Mike Roach/Zuffa LLC)

“He’s a good grappler. Strong guy,” says Marques, adding he expects them to “exchange some grappling knowledge” on fight night.

“I think both of us are going to try to show mixed martial arts,” noting that both men are eager to prove a game beyond their ground-game prowess. “For my part, I’m going to show my grappling—like always—but I’m going to show something more.

“I learned a lot about my loss, and I used it to improve myself in this game to do the next fight. It’s the most important part of this.”