Daniel Sarafian: The Next Chapter Beckons

"It's about giving the best fight we can to the fans, closing this chapter and moving on with our careers in the UFC." - Daniel Sarafian 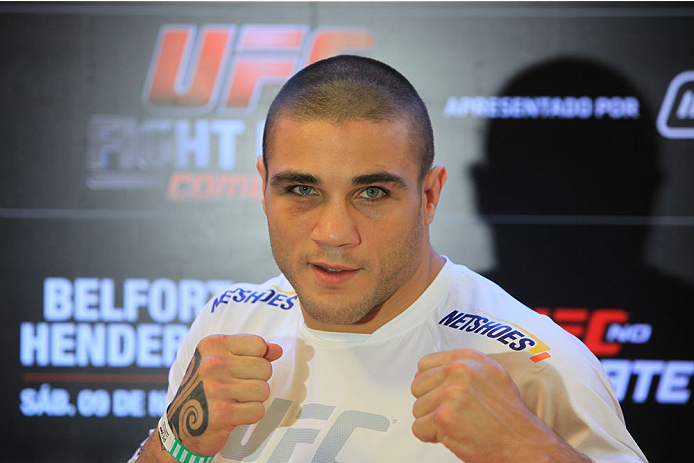 In the great scheme of things, Daniel Sarafian and Cezar “Mutante” Ferreira have their sights set on the UFC middleweight title, leaving their history on the first season of The Ultimate Fighter Brazil just that: history. But for the two 185-pound prospects to move forward, they have to look back to the TUF final that never was - a 2012 bout scrapped because of a Sarafian injury – and in the UFC Fight Night co-main event on Saturday, they will finally meet in the Octagon.

“Some people who live in other countries may not understand this but TUF Brazil 1 was very big here,” said Sarafian through manager / translator Eduardo Alonso. “It aired on the biggest network in the country with very good ratings, so people were expecting this fight since after the show. It was even tough for me, and I guess for him as well, to move on with our careers, as this was always the most asked question by journalists and fans: ‘do you want to fight Mutante? When are you guys fighting?’ For me it's really not about TUF Brazil anymore; he is the champion of the show and life went on. Now it's about giving the best fight we can to the fans, closing this chapter and moving on with our careers in the UFC.”

It was inevitable that the two would finish this eventually, and the time is right now, with the two established in the UFC and looking to more higher up the ranks. And with both fighters coming off wins, Sao Paulo’s Sarafian knew what was coming next.

“Honestly, this was something me and my team were kind of expecting already,” he said. “Not really because it was something I was anxious for, but because we knew this is something the fans wanted to see, and until we had finally fought people would always be wondering about that fight and it just had to happen. It's one of those things that needed to happen, and the UFC is about giving the fans what they want, so it made all sense in the world. When I won my fight in Fortaleza in June, and he won his in August in Rio, we were pretty much expecting the fight to happen and it was more like an ‘I knew it’ kind of feeling.”

Sarafian’s June victory over Eddie Mendez was his first in the Octagon, following a Fight of the Night split decision loss to CB Dollaway in his debut in January. For the 31-year-old, getting that first UFC win out of the way was a relief in a lot of ways.

“It's always great to win, and winning in the UFC was a long time goal,” he said. “But to be honest, it's even funny, because it felt more like a relief than a feeling of happiness. This is a very tough sport, and the UFC is where the best are fighting. There's really not much space for losers, so we know we have to always win. My UFC debut wasn't easy by any means, as there was tons of pressure and I was coming from time off due to injury, and fought a very tough and experienced guy in CB Dollaway. Falling short in a split decision wasn't easy, but I learned a lot from it and it was a very important experience. But I knew I needed to win the fight in June at any cost, so being able to do it as expected just felt as a relief.”

While there was no one complaining about Sarafian’s performance against Dollaway, he’s right; two losses in a row, no matter how they’re obtained, aren’t good for your future in the organization. So does he feel that with a win out of the way, he can finally move forward with his other fighting goals?

“I hope so, but I think somehow, being sincere again, I was too tied with the commitment of fighting Cezar as soon as possible to give the fans what they wanted,” he said. “So now, after this fight, regardless of what happens I feel both of us, me and him, will be able to move on and start to develop again. Obviously the winner will be in a better position in the division, but I see us developing much more in the UFC after this fight. This almost feels like the final pages of an early chapter in the UFC, and from there, new and different chapters will unfold for both of us. I know this is going to be an exciting fight for the fans, and we'll take it from there.”

But before turning the page, there is the business of “Mutante,” who had a long layoff due to injury after his TUF Brazil win over Sergio Moraes before returning with a fantastic 47 second finish of Thiago Santos in August. When asked what he’s taken away from those two fights, Sarafian said, “It's really tough to evaluate something based on his last fight, as it was very quick and his opponent is used to fighting in a smaller weight class and took the fight on short notice. Also, his fight against Sergio Moraes was long ago, he took one year between fights, and there was a lot of pressure with the TUF Finale. It's really hard to know exactly how much he changed, but I'm certain he changed and improved a lot. He is a complete fighter, dangerous in all areas and I know this, and I respect him a lot as a fighter.”

You could say the same thing when it comes to the fighting traits of Sarafian, a pro since 2007 who got an even more significant education in the MMA world thanks not just to his stint on TUF, but the attention and card placement he’s received in his home country since then. That’s not to say it was easy, but he has come out on the other side unscathed and more experienced.

“I think it's never an easy transition, mostly when you start already as a headliner like I did, making my debut as a co-main event in my hometown against a seasoned veteran,” he said. “As much as you prepare yourself - and I had the good fortune of having an experienced team around me that had years in the game - it's always a different pressure and there's a lot on the line. Now, coming to another high-profile fight and being in the co-main event again, I feel all the experiences I lived through in 2013 got me much more prepared to deal with it and handle it. I know it's just another important day on my job and I'm gonna do what I love the most, which is fighting, so I just need to give my best.”

Crazy what a couple years can do. But now that he’s here, Daniel Sarafian is ready to close out 2013 with a win and do even bigger things in 2014.

“2013 was a very important year in my life,” he said. “I think 2012 was a key year, being able to make a turn for the better in my career, and 2013 was the year where I matured more and lived many experiences to become a better professional. It makes sense that I close this cycle with the big fight the fans here wanted to see. We will give our best and it'll be, like I said, an exciting fight no matter what. Then, after this, I think I'll be ready to enter a new cycle and start 2014 more mature, experienced and prepared to build my own story with the UFC and that's what I'm looking for.”