When Daniel Rodriguez climbed to the top of the fourth highest peak in Mexico, Nevado de Toluca, in June, it wasn’t just a way for him to get a boost to his cardio like no other; it was almost a metaphor for a life that started at the bottom but is now reaching peaks he never could have imagined growing up in Southern California.

And that’s only making him hungrier for more.

“The hunger comes from when it wasn't like this and what it took to get here, and the sacrifices and things that I've done to get here,” said Rodriguez, who faces Preston Parsons this Saturday in Las Vegas. “Yeah, my life is changing and that's motivation in itself, but I want more. I come from nothing, so what I have now, I appreciate, but it ain't enough. I know there's more for me to gain and it's all up to the work that I put into it, and all I can do is work my ass off, stay consistent and be smart and good things are gonna happen like they've been happening. I'm happy with life, but I'm not comfortable.” 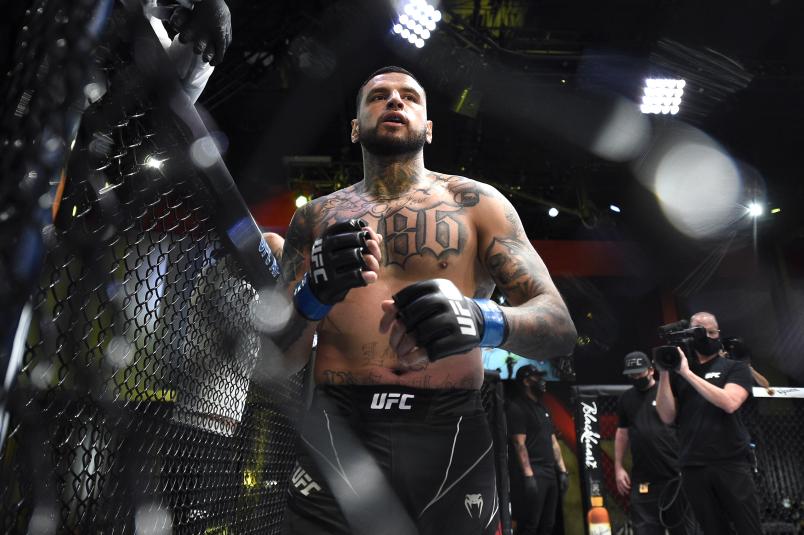 What better way to stay uncomfortable than to run four miles seemingly straight up, and that was simply part of the daily routine when he took up featherweight contender Yair Rodriguez on his offer to come train with him in Mexico for what “El Pantera” hoped would be a headlining gig this weekend against Max Holloway. An injury scrapped the former world champ from the bout, but “D-Rod” still had a fight to get ready for.

“The elevation up there is about 10,000 to 15,000 feet, depending on how far we go up, but it was intense,” he said of his work in Mexico. “It was extremely tiring just walking around and climbing up stairs, but it worked out good because my conditioning is on a whole other level right now. I'll tell you what, though, I've been on a million hikes and that was the toughest one of my life. But at the same time, I'm thinking in my mind, this might be one of the toughest fights of my life, so I just gotta put myself in that mind state where if I conquer this mountain, I'm gonna conquer this fight.”

It’s the attitude encapsulated by the old school saying, “The more you sweat, the less you bleed,” and speaking of old school, working in Mexico wasn’t just good for Rodriguez’ fight game; it was a reminder of who walked before him.

“A hundred, hundred percent,” he said. “I come up from boxing and some of my idols, like Julio Cesar Chavez, Marco Antonio Barrera and Erik Morales were legendary Mexican fighters, and to be at the same place where they've trained and won world championships, it gives me that much more motivation. And with me being a Mexican fighter myself and representing the Mexican American community, I had to take that opportunity to go and train up there because I want to feel what they felt.” 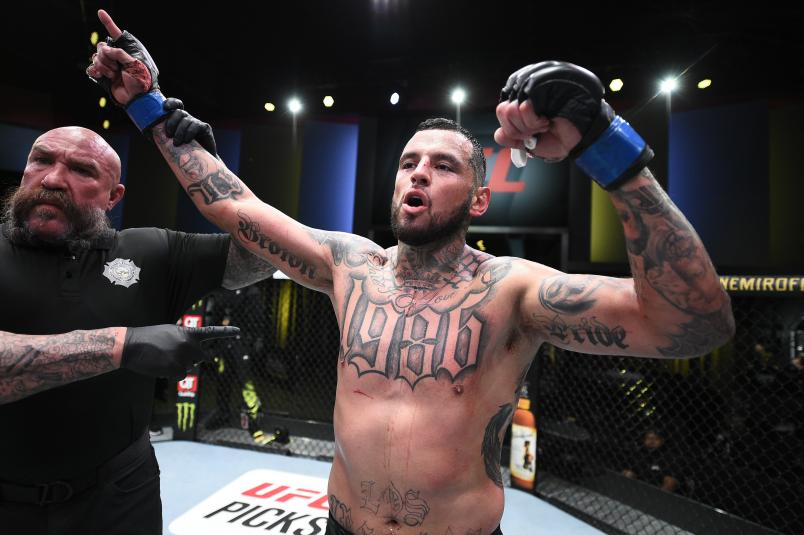 Daniel Rodriguez reacts after victory over Mike Perry in a welterweight fight during the UFC Fight Night event at UFC APEX on April 10, 2021 in Las Vegas, Nevada. (Photo by Chris Unger/Zuffa LLC)

The conversation drifts into the epic trilogy between Barrera and Morales and how there remained animosity between the two for a long time before the ice thawed in recent years. I ask Rodriguez if he hopes to run into that rival that will give him a fight (or fights) like that in the Octagon.

“Oh man, of course,” he said. “Legendary fights like that are something that I think about all the time while I'm training. I'm thinking about going and getting into one of those sick-ass wars one of these days, and I might be all cut up, he might be all cut up, but it's just motivation.”

It’s also a long way from those rough times for Rodriguez, now 34 and charging up the welterweight ladder in the UFC. A member of the roster since 2020, Rodriguez has already won four of his five bouts in the Octagon, most recently defeating Mike Perry in a high-profile April bout televised on ABC.

“It was probably the performance of my life and it also set the tone for the rest of my career,” he said. “I feel like there's a lot of people watching and I thrive off that. I don't feel pressure or nothing like that, and that's why every time I go in there, I go in there confident and comfortable and you'll never see me panic. I know what I'm going in there to do.”

That kind of spotlight can change a career. Rodriguez knows it, and he even got a spot on TMZ Sports where he said he was at least 200-0 in non-sanctioned fisticuffs. I ask him how he came up with that number and he laughs. 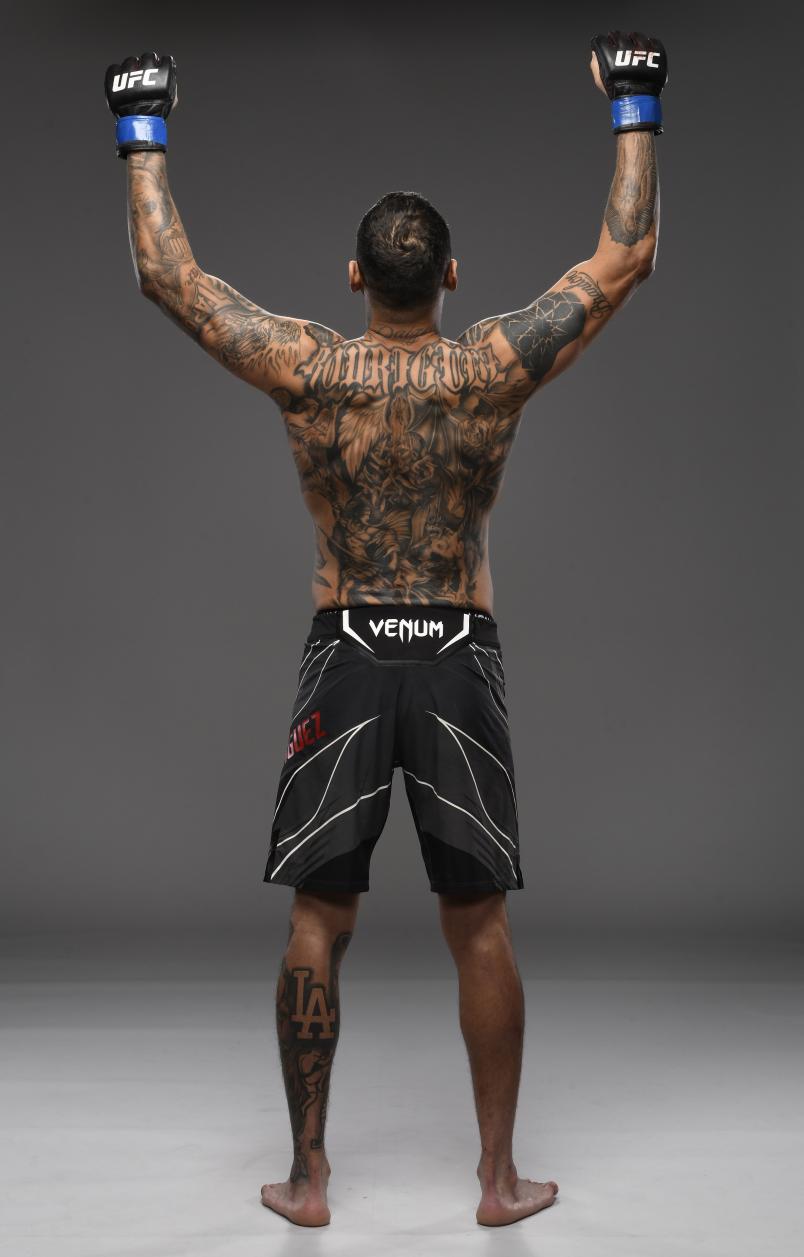 Daniel Rodriguez poses for a portrait after his victory during the UFC Fight Night event at UFC APEX on April 10, 2021 in Las Vegas, Nevada. (Photo by Mike Roach/Zuffa LLC)

“That's the background. That's what a lot of people don't know about me. I grew up kinda in the jail system and in the hood. They can pull my resume and it's not really something I'm proud of, but that's where I come from. I've been in and out of jail almost all my life up until I started getting real serious about MMA. I never played sports growing up. I just worked out and got in fights in jail and on the streets. I come from slap boxing, I come from going body punches with my homies, and it wasn't until I stopped getting in trouble that I started to really focus on this, and the only reason why I started bettering my life was because of MMA. I wasn't supposed to be s**t, but I literally turned nothing into something.”

It wasn’t an overnight transformation, but it did start when he became a father.

“It was like that until I started having kids,” said the father of four. “I started working a bunch of different jobs, trying to figure s**t out. I even tried to get into the military, but since I had a little criminal background, I didn't qualify for any of that stuff. I've done everything as far as work, but I always worked out like a mother**ker. That developed that work ethic.”

That desire to use his ability in a positive manner eventually led him to a gym. There, the coaches and his teammates saw a young man who was more than his record and his past. That changed everything.

“That was the story of my life,” Rodriguez said. “I got turned from a lot of places as far as getting a job, and the only people that really accepted me were the people in the gym. They saw something in me that makes a great fighter, and the more they got to know me, they were like, 'Man, this guy's actually a good guy.'”

Sixteen pro fights later, this is one good guy determined not to finish last.