Daniel Rodriguez Believes It's His Turn

Daniel Rodriguez Has Been Calling For His Shot At Mike Perry And At UFC Fight Night: Vettori Vs Holland He'll Get It.
By Thomas Gerbasi, on Twitter: @TGerbasi • Apr. 7, 2021

As one of the most decorated martial artists of all-time, Kathy Long knows a fighter when she sees one.

Daniel Rodriguez was a fighter.

“He walked in and I could see the hunger in his eyes,” said Long. “I saw it, he wanted it.”

What the Los Angeles native wanted was a fresh start in a sport that he knew would take him places his job as a member of the Local 416 ironworkers union couldn’t. He was 25 when he stepped into the TapouT gym in downtown LA, where Long was teaching Muay Thai.

“He came to me as a construction worker by day and he trained harder than anybody else at night,” said Long. “And there were days he'd walk in and I could see in his eyes that he was physically and emotionally exhausted, but he'd train harder than anybody there.”

Rodriguez didn’t know of Long’s resume as a five-time world kickboxing champion and the face of women’s combat sports during her heyday, but he soon found out.

"It's the fight I obviously wanted."

“I didn't know very much about the sport other than the fighters in the UFC,” said Rodriguez. “I didn't know about famous coaches or past legendary martial artists. I showed up at the gym, she's one of the original coaches there at the time, and I looked up her YouTube videos and I was like, 'Damn, this lady's a killer. She's a savage.' (Laughs) I fell in love with her style and she set the tone for my fight style and how I train.”

But there’s one thing you can’t teach in the art of fighting, and luckily Rodriguez already had that.

“I feel like I've always had the right team and corners, but as far as that killer mentality and that savage s**t that I got, that's from growing up in the streets of LA,” he said. “They found me this way; they didn't make me like this. They just tuned me up and showed me the right way how do things. Other than that, I've been a savage, and that's why I'm so comfortable in that ring or cage. I've been through way worse than these fights.”

It’s why after working together for a while, Rodriguez asked Long about checking out The Yard Muay Thai Gym, home to kickboxing great Joe Schilling. Long told Rodriguez that the new guy usually gets a rude welcome, but he insisted.

“You have my blessing,” Long said to her student. “Tell me how it goes.”

“He came back with a black eye and grinning ear to ear and happy as hell because he held his own over there,” Long laughs. “And he stuck with it.”

“That sounds about right,” laughs Rodriguez, who stuck with fighting all the way to the UFC, where he will make his fifth appearance on Saturday as he opens up the main card on ABC against Mike Perry. 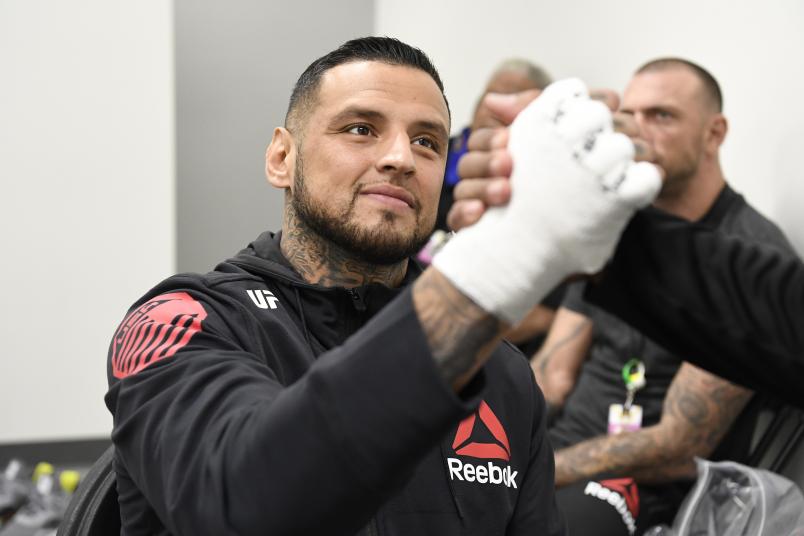 Daniel Rodriguez has his hands wrapped backstage during the UFC 255 event at UFC APEX on November 21, 2020 in Las Vegas, Nevada. (Photo by Mike Roach/Zuffa LLC)

Long says she’s “like a proud mom” when it comes to Rodriguez, and the two have kept in touch over the years. And as far as Long is concerned, she always knew “D-Rod” had something special.

“Daniel came to me incredibly shy, but he could hit like a mule,” she said. “If you had ever seen some of his amateur fights, he was knocking them out cold and he wasn't doing it with any finesse at all. But he was in there to beat the crap out of whoever was in front of him.”

Nothing’s changed for the 34-year-old, who has made quite an impression since his short-notice UFC debut in 2020, submitting Tim Means, decisioning Gabe Green and knocking out Dwight Grant before a decision loss to Nicolas Dalby last November. Sure, there’s more finesse and technique there these days, but in his chest beats a fighter who likes to take care of business with his hands.

“It's something I developed growing up in the hood, brawling,” said Rodriguez. “That Gabriel Green fight showed I could be in these brawls, I could be in these wars, and that was an amazing fight. I think that showed a lot as far as my fight style and that when fights get tough, you could expect me to fire back. I'm always gonna be throwing hands and mixing it up. I got a whole bunch of other tools, but when it comes down to it, my fight style comes down to that Mexican s**t.”

It’s why when the bout with Perry was announced, many believed the Fight of the Night checks should be reserved for the two welterweights immediately. Count Rodriguez in that group, and that’s no surprise considering that this is a fight he had at the top of his wish list. 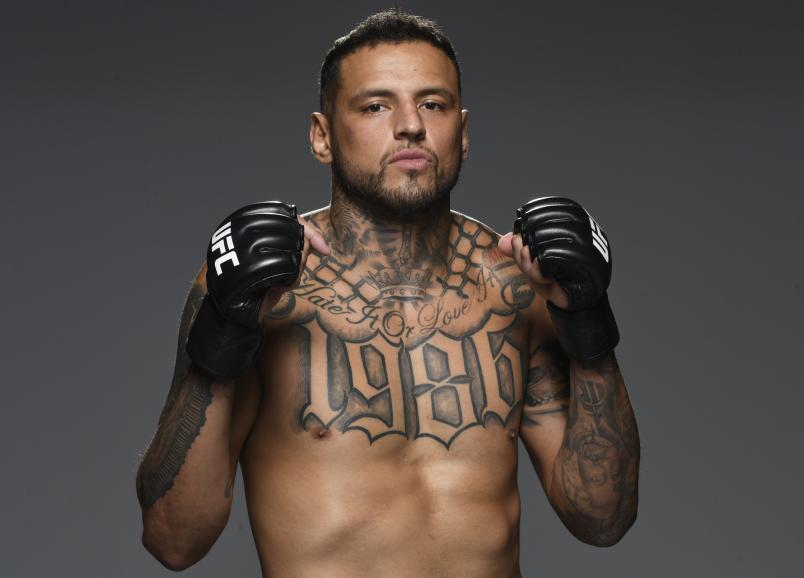 Daniel Rodriguez poses for a portrait after his victory during the UFC Fight Night event at UFC APEX on August 22, 2020 in Las Vegas, Nevada. (Photo by Mike Roach/Zuffa LLC)

“I wanted this fight,” he said. “He (Perry) is a big name and it's a great opportunity for me to show off my skills. He's not the best, most technical fighter; he's tough, he's strong, but to me his fight style is like another dude in the street. I feel it will be a great fight for the fans - if you look back at that Gabriel Green fight, I'm just throwing punches and Gabe Green kept coming. I can see this fight playing out a lot like that where Perry is just gonna be eating a whole bunch of punches, and I'll be throwing punches in bunches, so he's gonna eat a lot. I think Gabe Green has way more technique than Mike Perry, and I think Perry doesn't really have great defense at all. I'm super accurate and super-fast with my strikes, and my cardio's great, so it's a great opportunity.”

Opening up the main card on network television is something most fighters could only dream of. Rodriguez has dreamed of it, but now it’s going to be a reality come Saturday afternoon.

“It's already all been manifested,” he said. “I've been planning this. I called this fight out before it even got signed. I went out to Albuquerque before I even signed for the fight. I knew I was gonna get this fight and I'm ready for this. I'm telling everybody, I'm about to blow up. I already spoke it into existence, I did all the work, and it's just a matter of time now before the world gets to see me. People from all over are gonna be watching this. It's the best opportunity possible for me and I feel like my time is now. He had his chance to blow up.”