Daniel Kelly Finally Gets His Just Due 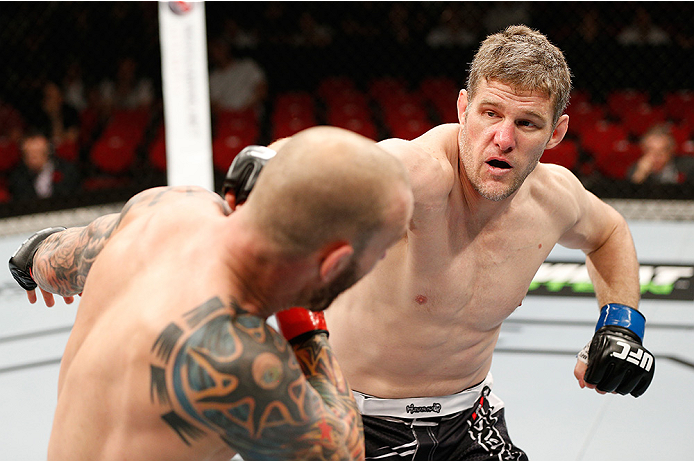 It’s one of sports’ great stories, Daniel Kelly’s four Olympic appearances as a member of Team Australia’s judo squad, a tale made even better by the fact that his wife Maria appeared in five Olympics in the same sport for Hungary and Australia.

You could almost picture the army of Wheaties boxes and television appearances for the couple if they lived in the United States, but when asked about being under the glare of the media spotlight Down Under, Kelly chuckles, revealing that he gets more recognition now as a member of the UFC’s middleweight roster than he ever did for judo.

“Judo’s not a big sport at all over here, so I get more credibility now, doing MMA, than I did in judo,” he said. “We get some media and stuff every four years when the Olympics are coming up, but apart from that, my wife’s an Olympic Bronze medalist and she got next to nothing for that and she’s a five-time Olympian. I get more attention now in the UFC than I ever got in the Olympics.”

That says a lot about how mixed martial arts has taken off in Australia, and after a stint on The Ultimate Fighter Nations and two Octagon wins, the 37-year-old Kelly is a big part of the movement in his native country. That may be an even better story than the nine combined Olympic appearances Kelly and his bride have accumulated, because it’s rare to succeed on the highest level in one sport, let alone two. But Kelly has pulled it off, and given Maria’s knowledge of the athletic life, it didn’t take much to convince her that this was going to be the next step following judo.

“I just kind of rolled on,” Kelly said of his full-time move to MMA. “I finished London (in 2012) and in December I had a fight and went ‘we’ll keep going.’ (Laughs) Then I cut weight from light heavy to middleweight and it snowballed from there, really. It’s a different experience and it’s about taking opportunities. Obviously, The Ultimate Fighter didn’t go exactly how we wanted it to, but I came back home, won another fight, and then got the opportunity and it’s about making the most of the opportunities you’re given. I love competition and this was just another avenue to keep competing.”

After that second fight in December of 2012, Kelly won five straight and got a shot on The Ultimate Fighter as a member of Team Australia in 2013. He lost his lone bout on the show to eventual finalist Sheldon Westcott, but last November he defeated Luke Zachrich and was now part of the roster.

In February, he fought for the first time outside of Australia against Patrick Walsh in the high altitude of Colorado, which gave him a crash course in some of the hurdles present in the fight game.

“It was very different,” he said. “We got there really early, just to deal with the altitude and all that, but it was hard. We weren’t able to get the normal food we get and have our normal routine, so that was a little bit different as well, but we dealt with it.”

And come weigh-in day, Kelly hit his mark. Walsh wasn’t even close, clocking in at 191.5 pounds for a middleweight bout. Kelly wasn’t happy, especially without getting even the courtesy of a warning from Walsh’s team before walking out on stage, but there was no question that he was going to fight the next day.

“No, not at all,” he said. “I trained properly and he was a fair bit over, but that was never a consideration. I was always going to fight. It was just bad form by him, really. We know 11, 12 weeks beforehand that we’re going to be fighting at a certain weight, and he decided to miss by a lot.”

Kelly outpointed Walsh over three rounds, moving to 2-0 in the Octagon. Walsh got cut after the fight, and now the southpaw from Melbourne will face Sam Alvey in Adelaide, Australia this weekend.

“It’s interesting,” Kelly said of the bout. “He’s going to have good takedown defense, he’s got very heavy hands and it will be an interesting fight. It won’t be a boring fight, let’s put it that way.”

If he wins, that’s three straight in the UFC and this story just keeps getting better. And though he’s not looking too far ahead, he does know that if you reach a certain point here, all bets are off.

“It’s cliché, but you worry about one fight at a time,” he said. “I’ve got one coming up, but I want to try and get to a top 15-ranked guy, and anything can happen if you become a top 15 guy. So it’s about winning fights, improving all the time, and I’m not going to limit myself by saying I want to get to this or that. Every fight, I feel like I’m improving and adding to my skill set and I’m not going to limit myself. Let’s see how long my body holds together, how long I can keep improving, and we’ll go from there.”

“No chance,” he laughs. “I coach now and I’ll hopefully coach five guys to the Olympics, but me competing myself is well and truly over. I think I’ll stay in MMA until I can’t walk anymore, to be honest. And that will be it.”