Daniel Hooker's passion for the game keeps him fighting 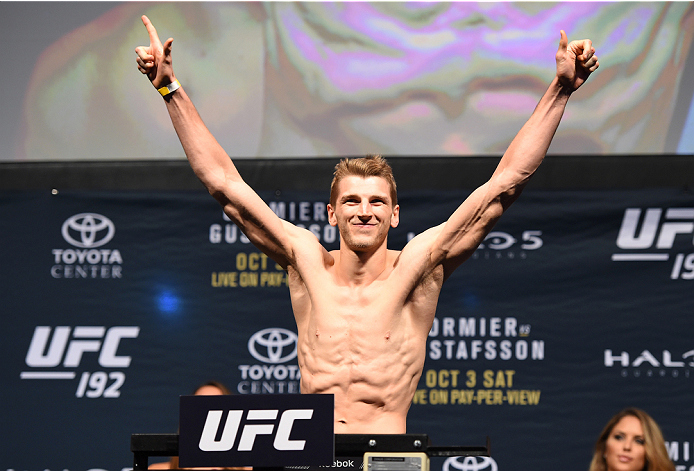 By the time Dan Hooker was six fights into his professional MMA career, he decided it was time to turn pro. Yes, turn pro.

“I started my career and I didn't even know what ‘pro’ was,” he laughs. “I barely knew what the UFC was when I first fought pro, so it was all a bit of a surprise. I got a few fights in and I asked some people, how do I turn pro, and they said 'mate, you've already had six pro fights, what are you talking about?' I was just like 'oh well, that's not a good start.'”

It wasn’t, at least on paper, as Hooker learned on the job to the tune of a 3-3 record. There were two split decision defeats thrown in the mix and plenty of potential shown to those watching, but the Auckland native admits that each defeat hit pretty hard back then, and they still do. But he’s still here, seven years after that first bout.

“It's just a passion,” Hooker said. “I've lost six times and I've retired five times. (Laughs) Then I blink and I find myself back at the gym on Monday morning and I don't know what I'm doing there. I thought I retired yesterday? It lasts a few hours and you kind of get over it. But to be honest, I've been fighting these fights with everything not put together mentally and physically. I think you've seen me at 30-40 percent, but I think I'm ready. I'm firing on all cylinders at a hundred percent now, and I know how good I am. The skill is there and everything is kind of put together now, so it's refreshed me. I hit the reset button and I'm starting from here at a hundred percent and there's big things coming in the future.”

This new beginning takes place on Saturday (Sunday in Australia), when he meets Mark Eddiva in Brisbane. It’s Hooker’s fifth UFC start and his first since teaming up with the stalwarts of the Team Elevation squad in Colorado.

“I met (UFC welterweight) Neil Magny at UFC Auckland and kind of followed him since then and read his interviews,” Hooker said. “He talked about how smart he trained and how great his coaches were. He was obviously on to a winning combination with his win streak and I really liked how active he was, fighting five times a year. That's something I really wanted to emulate in my career. I wanted to get more active, be injury free and train a lot smarter, so that's really where it came from. I messaged Neil and the rest is history. I got on a plane the next week, and boom, there it was.”

The 26-year-old sounds content with his new training home, which is a long way from New Zealand. But as he explains, to be the best, there are sacrifices to be made, and he’s willing to make them, even if it means leaving friends and family.

“I think I've always prioritized fighting over my own personal wants,” he said. “So it's not really a hard choice for me. I know the necessary steps I need to take to further my career and become the best fighter in the world, so it was easy. And those people that really support you and care about you, they can see that and accept that, and they don't stop you from chasing your dream.”

That dream is starting to take shape as well. Sure, he’s only 2-2 in the Octagon thus far, but the featherweight prospect has shown spectacular potential in his UFC finishes of Ian Entwistle and Hatsu Hioki, and in his UFC 192 matchup with fellow up and comer Yair Rodriguez, he may have lost a decision, but he was far from outclassed. In fact, you would be hard pressed to find a better fighter with a 13-6 pro record. And that reality has Hooker optimistic that 2016 will be his year.

“It's kind of like I had all the puzzle pieces and had nothing arranged,” he said. “They were all over and I was kind of just winging it. Now I see the complete picture and I put it all together.”

The first fighter to meet the new and improved Hooker will be the Philippines’ Eddiva, who is attempting to snap a two-fight losing streak this weekend.

“I'm expecting the best Mark Eddiva there is,” Hooker said. “I don't take anyone for granted, but I know how good I am and I trust in my own ability and my own skill. They could switch the opponent on the night, throw someone completely different in there, and it's really not gonna change anything for me. I know I can beat anyone in the world and I know how good I am, so it's no disrespect for Mark Eddiva, it's just the confidence in myself.”

And while the start was rocky, Hooker believes the end game he’s seeking will erase any memory of that beginning.

“Big fights, lots of fights, I'll take them as they come, but I will hold that world title one day, and there's nothing that can stop me from pursuing that,” he said. “That's the bar I've set, so anything below that, I've let myself down. That's the goal I set out to achieve, and I've dedicated myself and my life to achieving that goal.”