Daniel Hooker: Bring It On 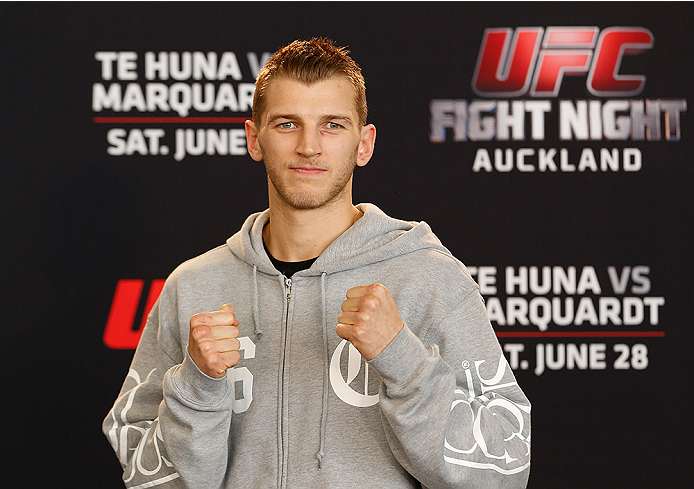 Two fights into his UFC career, and Daniel Hooker isn’t satisfied, but he is glad to be on the right track heading into bout number three this weekend against Hatsu Hioki.

That means a thumbs up for his debut win over Ian Entwistle, a thumbs down for his loss to Maximo Blanco, and a sunny outlook for Saturday night after he added some new tools to his arsenal during this training camp. And what does it all mean in the long run? A long future in the Octagon.

“The debut went well and then I jumped into my second fight as fast as I could, and maybe it wasn’t the smartest thing (Laughs), but I’m really enjoying working with the UFC,” Hooker said as he approaches his first-year anniversary as a UFC fighter in June. “It really is the biggest show and I’m looking forward to a long career. It’s not going to be two, three fights; it’s going to be 10-20 fights.”

To have that kind of longevity requires a consistent reassessment of what’s going right, what’s going wrong and what needs to be tweaked in order to stay at the elite level. So for the 25-year-old New Zealander, his decision loss to Blanco last September prompted him to visit an old friend in Vietnam.

“I worked with (boxing coach) Barry Robinson a few years ago and we clicked, and I always wanted to work with him again and he offered me the opportunity at this gym called SSC (Saigon Sports Club). They have a full-time scholarship with accommodation and all that, and we’ve got a great bunch of training partners, guys from all over the world, so it was too good of an opportunity to pass up.”

Hooker took Robinson up on the offer, took the 12-hour trip from Auckland to Saigon and got down to business. And while you might assume that with Vietnam not exactly being a hotbed for producing UFC stars that Hooker would have trouble finding adequate training partners, he said that’s certainly not the case.

“We’ve got coaches for everything,” he said. “We’ve got a Bulgarian wrestling coach, a black belt from the States, a Dutch kickboxing champ as our Muay Thai trainer, and there’s a bit of flavor from everything, so I definitely have the sparring. And I think once they start seeing the performances from the guys, who have a lot of big fights coming up, the interest will definitely grow over here.”

When you hear Hooker’s enthusiasm about his training camp, you get the impression that it won’t be the last time he visits SSC, but he does point out that bringing in something new to his game doesn’t mean that he’s abandoning the past.

“I knew Barry was a great coach, but it’s not like I’m leaving my old gym behind or moving on,” Hooker said. “I’ve taken those skills I’ve learned from there and I’ve come over here and I’ll grab some more skills. It just means I’m adding, as opposed to cutting one thing and completely starting a new one. I’m just throwing more skills in.”

He’ll need all of them against longtime Japanese contender Hioki, considered for years to be one of the best featherweights not competing in the UFC. And while the Nagoya native has had a rocky stay in the Octagon since debuting in 2011, he’s one of those fighters that can beat anyone at 145 pounds on any given night. Hooker is well aware of his opponent’s credentials, but he won’t be star-struck on fight night.

“There are guys I like and fighters I watch, but I never really admire anyone,” he said. “I see someone ahead of me and I want their spot more than saying ‘he’s a big deal, I won’t fight him, he’s too good for me.’ I see their name and I want what he has. I don’t want to stay here. I want to get better, I want to improve.”

If he needed any more motivation than that, he got it against Blanco. He laughs when asked how long that defeat sat with him.

“I think it still sits with me now. It gives me that burning desire to train and improve even more. That’s why I saw that I needed new skills, and I’ve added to that now. I thought it was a few technical things that I needed to improve, I’ve made those adjustments, and I look to show them in this fight.”

If he beats Hioki, a big name in the division, there’s no turning back and he knows it. So is he ready for whoever is thrown at him from a stacked weight class?

“When I signed that UFC contract I said I was ready for whoever,” he said. “There’s no one in this division I wouldn’t love to fight. So bring it on.”