Marquez MMA Out Of Philadelphia Is Starting To Reap Rewards Of Hard Work
By Thomas Gerbasi, on Twitter @tgerbasi • May. 26, 2022

Andre Petroski was the biggest underdog on the UFC Vegas 54 card on May 14. Seventy-six seconds later, he had submitted previously unbeaten Nick Maximov.

His coach, Daniel Gracie, was not surprised.

“Remember when my cousin Royce came in and finished everyone in the UFC and everybody was like, ‘What's going on, who's this guy, why is this happening?’” said Gracie. “It's the same thing with our team. People look at our team and they're wondering, ‘How is this team that showed up out of Philadelphia undefeated in the UFC?’ We are fighting a UFC fight every fight. I tell them all the time, you don't want to go there and win. You want to go there and make a statement. If you want to be a local fighter and fight in local shows, then you go there and just have fun. If you want to go to big shows, show me and show them. Prove to them that you're not a number. You know why you're here and you know what you came to do. Make them believe. And it's been happening.”

That’s an understatement. With Petroski’s victory, his third in three Octagon visits, the team led by Gracie and John Marquez is 14-0 in the UFC, with Petroski currently joined by Sean Brady (5-0), Pat Sabatini (4-0) and Jeremiah Wells (2-0). And now, MMA’s worst kept secret is out. It’s almost like the early days of MMA when it wasn’t a question of whether the Gracie family would win, but how long would that win take. 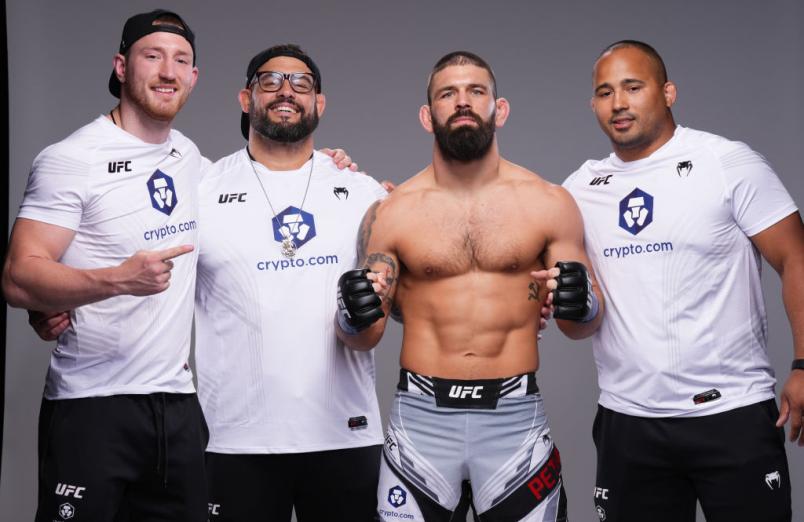 LAS VEGAS, NEVADA - MAY 14: Andre Petroski poses for a portrait after his victory during the UFC Fight Night event at UFC APEX on May 14, 2022 in Las Vegas, Nevada. (Photo by Mike Roach/Zuffa LLC)

But just like the Gracies, what might have seemed like an overnight success for the Philly-based team was anything but that. And while Daniel Gracie had fighters like Paul Felder and Jonavin Webb in the UFC before this latest run, it wasn’t until he joined forces with Marquez that everything truly clicked.

“This is not just me,” said Gracie. “I started this team and I've been training those guys for a long time already. Three of them are black belts of mine, so they didn't start training with me now, and that's why they're prepared for whatever is coming. There was only thing I was missing.”

The missing piece of the puzzle was one that used to be filled by Bozy Ennis, the respected Philly boxing coach and father of rising star Jaron “Boots” Ennis.

“He was our boxing coach,” Gracie said of Ennis. “But he wanted to take care of his son's career and he didn't have time. Then I found this guy named John Marquez. He had this academy, EEFC, and it was under the L in Philadelphia. One of his guys (Zulkarnaiyn Kamchybekov) came to train with me, and what caught my attention was his leg movement, and that was something I was trying to teach my guys, but I didn't have the experience to teach them.”

There was a bit of a language barrier with Kyrgyzstan’s Kamchybekov, but when Gracie met Marquez when they cornered the fighter, the member of MMA’s first family had a request.

“Can you do two days a week at my gym, teaching my guys?”

“Of course. Can I bring my fighters?”

Those are the nuts and bolts essential to any success to MMA. But not many teams put together a 14-0 run in the UFC. What’s the secret?

“What I'm doing here is exactly the way I grew up,” said Gracie. “I show them that it's not just about being tough and about knowing how to fight. It's about a unit, a team, like the Spartans. You don't see a Spartan fighting alone; they all fight together. And we're creating an environment here where everyone that comes here feels comfortable and they're really putting the work in. Most important, they're having fun. For them, it's not a battle to go the next day and train with the body sore; they enjoy doing that, and that's the biggest difference that I see. Yes, I know that it's work, but their best friends are there. They live that life. When they don't go to training, they feel like they miss something.”

And while Brady, Sabatini, Petroski and Wells are the ones gracing the big show at the moment, there are no egos in the room, and the most accomplished UFC fighter is treated the same as the kid looking to make his amateur debut.

“Every fighter that we have, we treat them the same,” Gracie said. “There's no special attention with the guys that are in the UFC. If you come to see one of our practices, you're gonna see the amateur guys sparring with the UFC guys; we don't separate them. And we have amateurs now that if we put them in the UFC today, I'm not gonna say they're gonna be Top 5 but they'll beat a lot of people in there.”

That’s not big talk from the coach; that’s confidence in his fighters and his process, a process learned under one of the greats of the sport, his cousin Renzo Gracie. 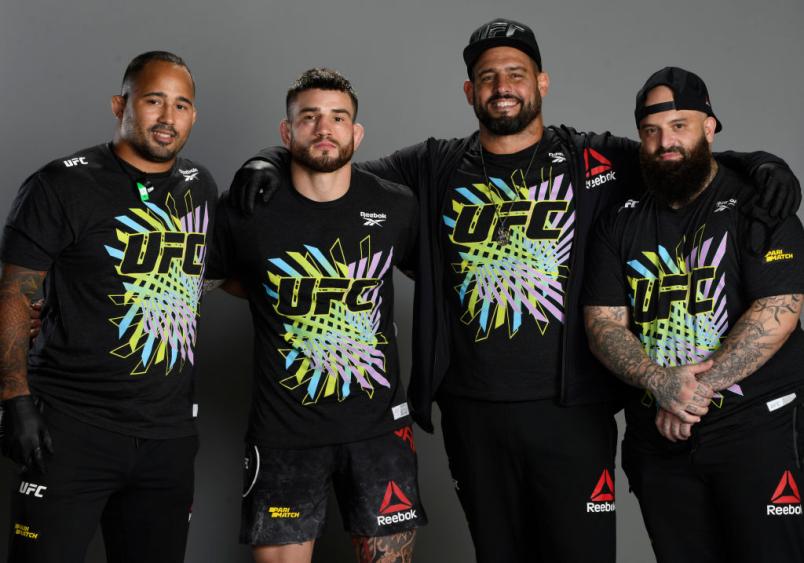 LAS VEGAS, NEVADA - AUGUST 29: Sean Brady poses for a portrait after his victory during the UFC Fight Night event at UFC APEX on August 29, 2020 in Las Vegas, Nevada. (Photo by Mike Roach/Zuffa LLC)

“I had the best teacher,” said Gracie. “Renzo, for me, is one of the best coaches I've ever seen in my life in MMA and he taught me something in jiu-jitsu and MMA - recognize people's pros and cons, what they can do and what they can't. And I tell them all the time, it's okay if you're afraid of fighting. But use that fear to win the fight. Renzo told me something at one of my fights in PRIDE:

“No, I just have too much adrenalin.”

Gracie laughs, and that’s typical Renzo, one of the fiercest competitors in the game. Daniel, 49, knows something about competing at that high level, both as a decorated grappler and a mixed martial artist who competed in PRIDE, Bellator and the IFL. And while there have been some notable coaches who have never strapped the gloves on, Gracie believes knowing what it’s like to make that walk is a key to his fighters’ success.

Sean Brady Lives For A Challenge

“Yes, technically you can be a good coach if you never fought before,” he explains. “But once the heat in the fight happens, you're not gonna be a good coach and I see that happen all the time. I always come to the corner with technical information, with what's happening in the fight and what he needs to do. If you never fought before, you're never gonna be able to do that. It's easy to get a Michael Jordan and say, 'Go there and make the points.' Of course, Michael Jordan's gonna score the points. But when Michael Jordan starts to miss the shots, then you need to know how to correct it. Tell me how a coach that never played basketball is gonna coach Michael Jordan? How is a coach that never played football is gonna coach (Tom) Brady? It makes no sense. But people believe that in MMA it's different, that in MMA you can do it. It's impossible. One of the reasons for the success of our team is that I recognize situations that I've been through. I know what it's like to get punched in the face and get that flash, going down and coming back. So I know what to do to avoid that, I know what to do to prepare for that. I tell them, through my experience, what's going on in there.”

It’s a layer of trust that is necessary for a fighter to make it through a tough night, and by the time his students make it to the big show, he expects that they’ve had a few of those nights under their belt.

Get Your SINGAPORE Tickets For UFC 275: TEIXEIRA vs PROCHAZKA

“When our amateurs go pro, they're ready to get thrown to the lions,” Gracie explains. “And what I think is happening today is that guys are doing good in local shows but they don't face tough opponents. They face easy opponents. And then when they get thrown to the lions, they have no idea what's happening. And this is the biggest problem. Our guys are fighting wars before they go to big shows. Our guys are doing phenomenal work before they sign with the big shows. And then when they get there, they are more experienced than the other fighters that they put in front of them.”

Gracie’s Fab Four were battle-tested when they got the call to the UFC, and they haven’t shied away from top-level competition since. Next up is Wells, who meets streaking veteran Court McGee on June 18. Not surprisingly, Gracie is confident of another win.

Again, as Muhammad Ali once said, “It’s not bragging if you’re telling the truth,” and few, if any, can argue with 14-0. But Daniel Gracie is done talking. He’ll just let his fighters do that in the Octagon.

“Every coach has the next Georges St-Pierre, the next Jon Jones,” he said. “Everyone that hits up (UFC matchmakers) Mick Maynard or Sean Shelby, they say I've got the next champion of the UFC. Everyone says that. And the reality is, you don't have to say it, you have to show it.”